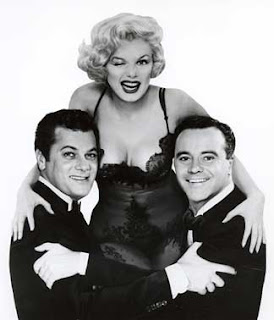 The movie Some Like It Hot (1959) is one of the great classic comedies of all-time, so it almost pointless to write a review of the film. However, I recently watched it on TCM, and even though this film is over fifty years old it is still one of the finest comedies Hollywood ever produced. I watched the film as I was going to sleep in bed, and needless to say I stayed up to the very end of the movie. I just had to!

The film is a remake by Wilder and I. A. L. Diamond of a 1935 French movie, Fanfare d'Amour, from the story by Robert Thoeren and Michael Logan, which was itself remade in 1951 by German director Kurt Hoffmann as Fanfaren der Liebe. However, both the French and German films were without the gangsters that are an integral part of the plot of Some Like It Hot. Wilder's working title for his film was Fanfares of Love, then Not Tonight, Josephine before he decided on Some Like It Hot as its release title.

Two struggling musicians, Joe and Jerry (Tony Curtis and Jack Lemmon), witness what looks like the Saint Valentine's Day massacre of 1929. When the Chicago gangsters, led by "Spats" Colombo (George Raft), see them, the two flee for their lives. They escape and decide to leave town, taking a job that requires them to disguise themselves as women, playing in an all-girl musical band headed to Florida.

Calling themselves Josephine and Geraldine (later Jerry changes his pseudonym to Daphne), they join the band and board a train. Joe and Jerry both become enamored of "Sugar Kane" (Marilyn Monroe), the band's vocalist and ukulele player, and struggle for her affection while maintaining their disguises. In Florida, Joe woos Sugar by assuming a second disguise as a millionaire named "Junior", the heir to Shell Oil, while mimicking Cary Grant's voice. An actual millionaire, Osgood Fielding III (Joe E. Brown), becomes enamored of Jerry in his Daphne guise. One night Osgood asks Daphne out to his yacht. Joe convinces Daphne to keep Osgood ashore while he goes on the yacht with Sugar. That night Osgood proposes to Daphne who, in a state of excitement, accepts, believing he can receive a large settlement from Osgood immediately following their wedding ceremony. 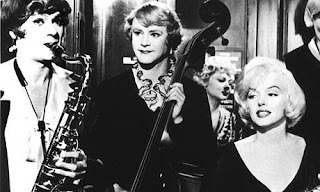 When the mobsters arrive at the same hotel for a conference honoring "Friends of Italian Opera", Spats and his gang see Joe and Jerry. After several humorous chases (and witnessing yet another mob murder, this time of Spats himself and his crew), Jerry, Joe, Sugar, and Osgood escape to the millionaire's yacht. Enroute, Joe reveals to Sugar his true identity and Sugar tells Joe that she's in love with him regardless. Joe tells her that he is not good enough for her, that she would be getting the "fuzzy end of the lollipop" yet again, but Sugar loves him anyway. Jerry, for his part, tries to explain to Osgood that he cannot marry him, launching into a range of objections from insisting that he can't get married in his mother's dress ("We are not built the same way,") to the tearful confession that he can "never have children." Osgood dismisses them all and remains determined to go through with the marriage. Finally, exasperated, Jerry removes his wig and shouts, "I'm a man!", only for Osgood to override this final revelation by uttering the film's memorable last line, "Well, nobody's perfect." 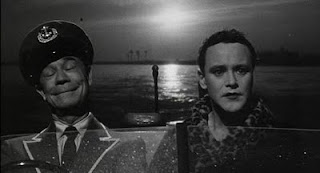 That last line not only makes the movie, but is one of the greatest lines in cinema history. The whole cast was out of this world. Tony Curtis and Jack Lemmon do look a lot like women, but you almost forget they are men when they are dressed in drag. Marilyn Monroe was a little heavier in this film, and sadly she would be dead three years later, but she was wonderful in it. The supporting cast of Pat O'Brien and George Raft also gives the movie an authentic feel of the 1930s to it. All in all there is nothing bad I can say about this film. Even though I have it on DVD, I am so happy I caught it again on television...