THE LAST DAYS OF BILLIE HOLIDAY 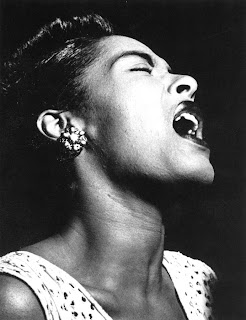 When jazz singer Billie Holiday was first starting out in the 1930s, her phrasing and voice were audio gold. She did not have the great singing voice, but on those jazz 78s of the 1930s, Holiday could express a mood in a few short minutes. Holiday had a very sad life. She was born in 1915, not knowing who her father was and living a childhood where her mother reportedly was a prostitute. By the age of fourteen, Billie herself was a prostitute, and as early as 1930 she and her mom were arrested in a raid.

The 1930s saw Billie at the height of her career. She worked with some greats of jazz like Count Basie, Artie Shaw, and Teddy Wilson. She not only broke color barriers but transended them. Unfortunately, her success was not enough to conquer her past demons. By the 1950s, Holiday's drug abuse, drinking, and relationships with abusive men caused her health to deteriorate. She appeared on the ABC reality series The Comeback Story to discuss attempts to overcome her misfortunes. Her later recordings showed the effects of declining health on her voice, as it grew coarse and no longer projected its former vibrancy.

On March 28, 1957, Holiday married Louis McKay, a Mafia enforcer, who like most of the men in her life was abusive, but he did try to get her off drugs. They were separated at the time of her death, but McKay had plans to start a chain of Billie Holiday vocal studios, à la Arthur Murray dance schools. 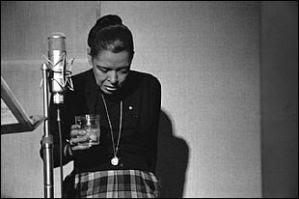 Holiday's late recordings on Verve constitute about a third of her commercial recorded legacy and are as popular as her earlier work for the Columbia, Commodore and Decca labels. In later years, her voice became more fragile, but it never lost the edge that had always made it so distinctive.

In early 1959 she found out that she had cirrhosis of the liver. The doctor told her to stop drinking, which she did for a short time, but soon returned to heavy drinking. By May she had lost twenty pounds. Friends Leonard Feather, Joe Glaser, and Allan Morrison tried to get her to check into to a hospital, but she put them off.

On May 31, 1959, Holiday was taken to Metropolitan Hospital in New York suffering from liver and heart disease. She was arrested for drug possession as she lay dying, and her hospital room was raided by authorities. Police officers were stationed at the door to her room. Holiday remained under police guard at the hospital until she died from pulmonary edema and heart failure caused by cirrhosis of the liver on July 17, 1959. In the final years of her life, she had been progressively swindled out of her earnings, and she died with $0.70 in the bank and $750 (a tabloid fee) on her person. Her funeral mass was held at Church of St. Paul the Apostle in New York City. 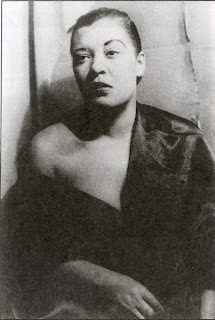 Gilbert Millstein of The New York Times, who had been the narrator at Billie Holiday's 1956 Carnegie Hall concerts and had partly written the sleeve notes for the album The Essential Billie Holiday described her death in these same 1961-dated sleeve notes:

"Billie Holiday died in the Metropolitan Hospital, New York, on Friday, July 17, 1959, in the bed in which she had been arrested for illegal possession of narcotics a little more than a month before, as she lay mortally ill; in the room from which a police guard had been removed – by court order – only a few hours before her death, which, like her life, was disorderly and pitiful. She had been strikingly beautiful, but she was wasted physically to a small, grotesque caricature of herself. The worms of every kind of excess – drugs were only one – had eaten her ... The likelihood exists that among the last thoughts of this cynical, sentimental, profane, generous and greatly talented woman of 44 was the belief that she was to be arraigned the following morning. She would have been, eventually, although possibly not that quickly. In any case, she removed herself finally from the jurisdiction of any court here below"... 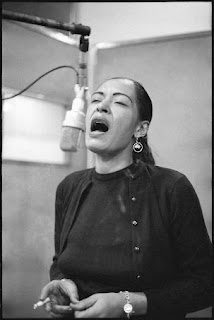 Posted by David Lobosco at 5:37 AM