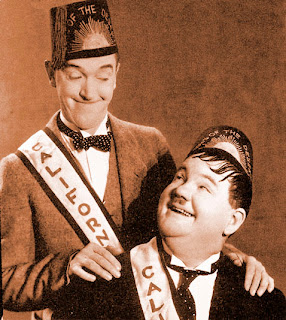 They meet every Tuesday afternoon at the famous Culver Hotel in Culver City, seated at a center table in the restaurant, engaged in lively, loud luncheon conversation. They are members of the Sons of the Desert, the international Laurel and Hardy appreciation society, and a more devoted group is hard to find.

The name derives from the 1933 comedy starring Stan Laurel and Oliver Hardy. They play friends with domineering wives who hope to attend a convention of their fraternal organization, called Sons of the Desert. The film society has "tents" all over the world, including several in California, with the Way Out West tent in Hollywood.

A recent Sons gathering was particularly ebullient. The group was thrilled about the recent release of "Laurel & Hardy: The Essential Collection" DVD set which contains 58 comedy shorts and features starring the gangly Englishman Laurel and the portly Hardy that they made for producer Hal Roach from 1929 through 1940. Among the highlights are "Sons of the Desert," 1937's "Way Out West," 1938's "Block-Heads" and 1932's Academy Award-winning short "The Music Box," in which the boys try to deliver a piano up a massive flight of stairs.

"The reason we meet here is that the Hal Roach Studios were right down the block," offered Richard W. Bann, author of such film history books as "The Little Rascals: The Life and Times of Our Gang," which he penned with Leonard Maltin. "We meet here because we can't meet there for lunch. They tore the studio down in 1963." 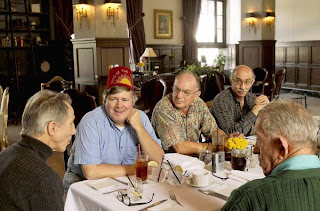 Bann hands over a copy of the menu from the studio's Our Gang Café — the Our Gang comedies were another Roach franchise — from the 1930s where one could get a caviar appetizer for 30 cents. "It was right in front of the studio," said Bann. "It was open to the public, and Our Gang and Laurel and Hardy would eat there with the public. It was a family studio — everyone was friendly."

Sitting across from Bann at the table is John Duff, who said he first fell in love with Laurel and Hardy as a boy of 5 when he would get up early on Saturday mornings to watch them on TV. "I made a promise to myself that one day I would have a library of their films. I started collecting 16mm films, and over the years I have got the DVDs."

Like Duff, Mike Nemeth's affection for the pair dates to TV in the 1950s. "They are the warmest, the best," he said.

"There is no question in my mind that Laurel and Hardy comes closet to representing the average American as he bumbles along in life," Nemeth said. "Despite all the messes they get into, they still stick up for one another and love each other. This warmth brings us close to them like no other comedians."

"I think that's one of the reasons why people took to them so much, because they were eternal optimists," said Randy Skretvedt, author of "Laurel and Hardy: The Magic Behind the Movies."

"There is a scene in the Laurel and Hardy movie 'Block-Heads" where Ollie comes to visit Stan in the old soldiers home after not seeing him for 20 years," related Skretvedt. "They make small talk, but the undercurrent of the scene is basically 'I love you and miss you." What other comedy team would do a scene like that?"

Former child star Johnny Crawford of "The Rifleman" fame, who now has a big-band orchestra, actually met Laurel before his death in 1965. "I was doing an interview for some local TV show and also being interviewed was Babe London," recalled Crawford. London had appeared in the 1931 Laurel and Hardy short "Our Wife."

"She talked about her past with Laurel and Hardy. We became friends, and I was determined to get to meet Stan Laurel," Crawford said. "One day we arranged a time to go to his apartment in Santa Monica. My father, my mother and my younger brother and myself all drove there. He was a wonderful, gracious host, very sweet."

Veteran comic Jim MacGeorge not only knew Laurel, he also played him in a series of commercials more than 40 years ago with Chuck McCann as Hardy and also on the 1966 Laurel and Hardy cartoon series, which featured Larry Harmon as the voice of Hardy. Scratching his head like Laurel, MacGeorge gets a perplexed grin on his face and suddenly transforms into the comic actor.

MacGeorge recalled that he had gotten Laurel's phone number from his agent. Standing outside his apartment, MacGeorge wondered if he should call Laurel. "I said to myself, 'Do it.'"

Not only was Laurel pleased to hear from a fan, he asked him to come to lunch the following week. "So I used to go there and visit him. I would knock on the door, and he would open it. He would say, 'How are you, lad?' He called everyone lad. I said, 'How are you? He said, 'My life is over. Come on in. He said the same thing every time."

SOURCE
Posted by David Lobosco at 4:31 AM