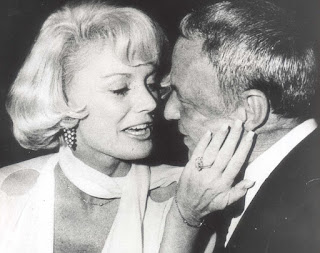 The Barbara Sinatra Children’s Center director John Thoresen told Fox News Sinatra died of natural causes, and she was "comfortably surrounded by family and friends" at the time of her death.

Born Barbara Blakeley, the Bosworth, Missouri, native began her modeling career at 18 after her family moved to Long Beach, California.

Shortly after her move, she married Robert Oliver, but they divorced, and she then married Zeppo Marx in 1959. After she and Marx divorced, she went on to marry Frank Sinatra who was previously married three times. 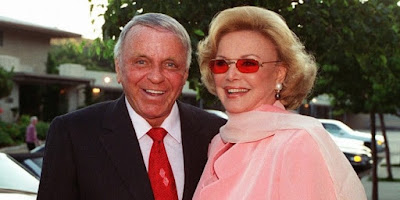 Barbara and Frank Sinatra wed in 1976 in a private ceremony at the Annenberg Estate in Rancho Mirage. She and the "Come Fly With Me" singer remained married until Frank Sinatra's death in 1998.

Barbara Sinatra became famous in her own right for her work battling child abuse. She founded the Barbara Sinatra Children's Center to help children who were victims of abuse.

She is survived by her son from a previous marriage Robert Oliver Marx, his wife Hillary Roberts and her granddaughter Carina Blakeley Marx... 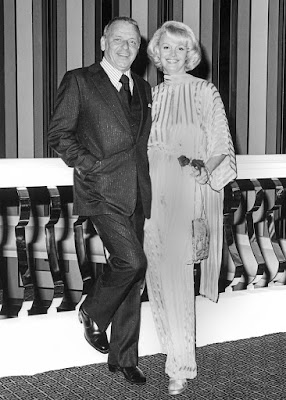 Posted by David Lobosco at 4:30 PM No comments: 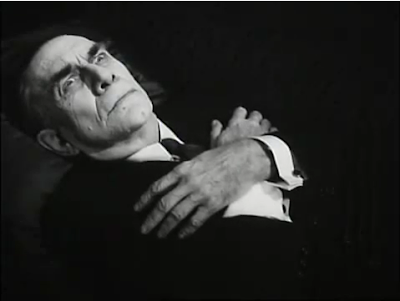 With the death of Martin Landau this past week, I was reminded of my favorite role he did - that of Bela Lugosi in Ed Wood (1994). To remember this remarkable actor, I dug up a review of his performance. Scott Schuldt wrote this piece and it appeared around October 7, 1994 in newspapers and magazines...

What's interesting is that if you didn't know in advance it was Landau playing Bela Lugosi, you might not recognize him at all.Rick Baker's makeup transforms his features. With his real voice hidden by a Hungarian accent, Martin Landau the actor disappears and Lugosi, the long dead actor who played "Dracula" in 1931 comes vividly back to life.

The Lugosi of "Ed Wood" is not a happy one. He's in his 70s, debilitated not just by his age but by 20 years of morphine addiction. He's also out of work, an "ex-bogeyman" as he refers to himself, who finds work again, even if it is in the monumentally awful films of Edward D. Wood Jr. Landau was made available to the press for interviews during a recent promotional trip for the movie "Ed Wood," paid for by Touchstone Pictures.

While Landau's choice to play Lugosi was an inspired one that should hopefully land him his third Oscar nomination since 1988, the actor was surprised director Tim Burton chose him. 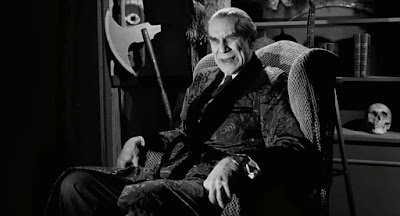 "I'm amazed that Tim thought of me. Well, in the sense that I'd never met Tim," Landau said.

"I liked his work a lot ... He was one of those guys I said, 'Gee, I would like to work with that guy. ' I got a call and he said, 'You are my first and only choice for this. ' " What Burton saw in Landau is clear from the performance he gives as Lugosi, whose relationship with Wood, played by Johnny Depp, is at the heart of the film.

"I met Johnny and loved him immediately. ... We became friends.

Generation gaps - nonsense. I mean, Lugosi and Ed Wood, there was a lot of years between them. Johnny became - and is - my pal," Landau said.

It's the rapport that develops between the two actors that deepens the movie.

"There is a sweetness in (the relationship between Wood and Lugosi), yet it's got layers ... It's an interesting relationship.

You don't see that a lot in film. These are two guys who needed each other and they're two really weird, strange guys. " Landau credits his co-star for the screen relationship's success.

"I love an actor who comes in, ready to work. It's like a good tennis player. They hit the ball where you don't expect it and it's great," Landau said. 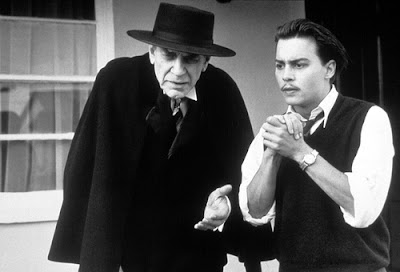 "Ed Wood" marks the latest in a series of notable roles that have marked a resurgence in Landau's career. Following "Tuc-ker: The Man and His Dream" in 1988 and "Crimes and Misdemeanors" in 1989, both of which earned him Oscar nominations, Landau finds himself more in demand than ever.

"The more complicated the character, the better I am. It's the one-dimensional crap that I had to do for years that drove me crazy," he said.

"If you are in a meaningless, mindless movie playing a one-dimensional character, don't get too clever, because you're only going to dig a hole for yourself ... It's good writing and complicated stuff. When I got 'Tucker,' and there had been a dearth of that stuff coming my way, I said, 'My God, this is a part. ' " He certainly welcomes the praise and Oscar buzz he's receiving for his work as Lugosi, saying it's much better than hearing nothing.

"I'd rather hear this talk than the alternative. I've walked off the stage and people have said, 'That was really great. You look really nice in that suit. ' It's looks and feelings that you get.

People never say, 'Jeez, you were awful. " In many interviews, Landau has referred to his work in "Ed Wood" as a love letter to Lugosi, with whom the 60-year-old Landau had a formative film experience.

"I saw (Lugosi) when I was a kid and he scared the life out of me. I literally didn't sleep for days," Landau said. The 63-year-old film's power hasn't diminished in Landau's mind.

"It was a revival of 'Dracula. ' I was maybe 8 or 9 years old and there was this incredible creature on the screen. Look at it again... 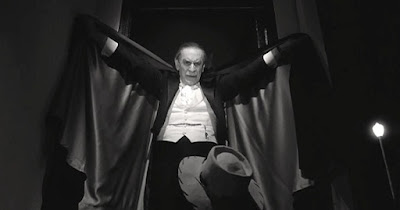 SOURCE
Posted by David Lobosco at 9:49 AM No comments: 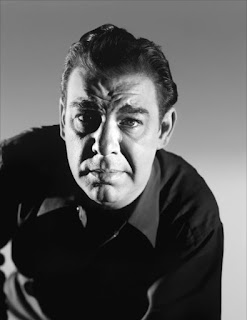 Lon Chaney Jr. died on this day - July 12th some 45 years ago. Chaney was only 67. He was one of the most emblematic horror film stars of the 1940s. Though given the name "Creighton Chaney" by his parents, he took the name "Lon Chaney, Jr." at the behest of a producer who wished to capitalize on the reputation of his father, who had starred in such silent classics as "The Hunchback of Notre Dame" and "Phantom of the Opera."

After playing a number of small, forgettable roles through the 1930s, the younger Chaney's first role of note was 'Lenny Small' in the 1939 film adaptation of John Steinbeck's "Of Mice and Men." This role made great use of Chaney's size and empathetic manner, and would remain his favorite. He followed this with an even greater success, playing the title character in 1941's "The Wolf Man." His performance, which echoed his own life as a prodigal son figure returning home only to find tragedy, came as his father's studio, Universal Pictures, was struggling to reestablish itself as the premier studio for horror films. Universal would cast Chaney in a string of sequels to both "The Wolf Man" and it's classic films of the 1930s. 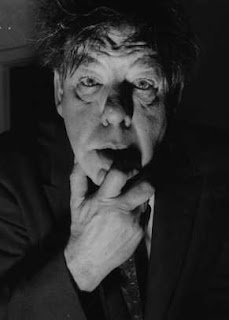 All in all, Chaney would end up playing the Wolf Man five times, the barely mobile mummy Kharis three times, the Frankenstein Monster once (and again, briefly, in perhaps the best of Universal's long run of sequels, 1948's "Abbott and Costello Meet Frankenstein" when Glenn Strange was incapacitated), and Dracula once. He would also star in Universal's "Inner Sanctum" series and a number of lesser thrillers through the 1940s. Though the films were always entertaining, and Chaney almost always made a great effort to imbue his performances with quality, the formulaic nature of these productions concealed his ability, and he became typecast as a "monster."

Chaney's last roles of note were as a supporting player in both 1952's "High Noon" (starring Gary Cooper) and 1958's "The Defiant Ones" with Tony Curtis and Sidney Poitier. More often, he would play in a number of low-budget films, mostly westerns and horror films, often reprising his roles from the glory days at Universal. Always a heavy drinker, he would die from various alcohol-related ailments after playing his last role, fittingly enough a non-speaking part in the 1971 farce "Dracula vs. Frankenstein.". His body was dedicated to medical science... 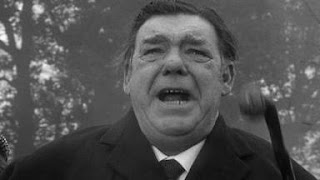 Posted by David Lobosco at 3:28 PM No comments:

OLIVIA DEHAVILLAND AND A NEW LAWSUIT 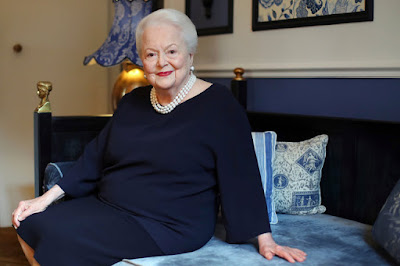 Olivia de Havilland, who won two Oscars during Hollywood’s golden age, filed a lawsuit on Friday against FX Networks and Ryan Murphy Productions over her gossipy portrayal in the television show “Feud: Bette and Joan.”

“FX defendants misappropriated Olivia de Havilland’s name, likeness and identity without her permission and used them falsely in order to exploit their own commercial interests,” the lawsuit says. Ms. de Havilland, 101, is seeking damages for “emotional harm” and “harm to her reputation,” and is also pushing for an injunction against the use of her name and likeness.

“Feud: Bette and Joan” portrays the decades-long rivalry between Joan Crawford and Bette Davis, and is part of Mr. Murphy’s larger FX anthology series depicting feuds throughout history. Ms. de Havilland and Davis were close friends and starred in four films together, including “Hush … Hush, Sweet Charlotte.” In the series, Ms. de Havilland, played by Catherine Zeta-Jones, is an important character, appearing in six episodes as a confidante to Davis and an active participant in the Davis-Crawford drama.

The lawsuit rejects both the quotes attributed to Ms. de Havilland and the overall tone of the portrayal. “Olivia de Havilland has made efforts, spent time and money, protecting her well-defined public image as one who does not engage in gossip and other unkind, ill-mannered behavior,” the lawsuit reads.

Mr. Murphy, the creator of “Feud,” told the The Hollywood Reporter in April that he did not contact de Havilland about her portrayal in the series.

“I didn’t write Olivia because I didn’t want to be disrespectful and ask her, ‘Did this happen? Did that happen? What was your take on that?’” he said. 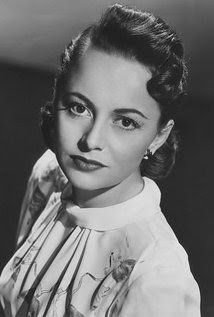 SOURCE
Posted by David Lobosco at 10:44 AM 2 comments: