Cary Grant (1904-1986) in my humble opinion is the patron saint of all leading man. Sure, there were actors out there that might have had more of an acting range, but Cary could make any movie he was in seem great. It took a lot of work for him to get the scenes just right, but when the audience sees the finished work on the screen, he made it look so easy. That is a person who has a great understanding of his craft.

In my personal opinion, here is my five favorite Cary Grant films:

5. MR. BLANDINGS BUILDS HIS DREAM HOUSE (1948)
I never fully appreciated this comedy until I became a home owner, but Cary Grant expresses the frustration of building a dream house with great hilarity. He works well with Myrna Loy as his long suffering wife, and his character in the film is the kind of a neighbor I would want. I just would not want to live in his house! 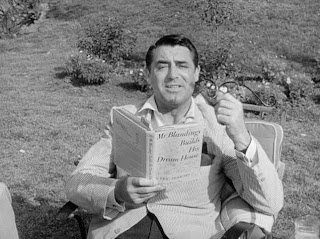 4. SUSPICION (1941)
Cary Grant teamed with Alfred Hitchcock in this compelling tale of a secretive husband possibly trying to kill his wife (Joan Fontaine). Grant showed a different side of himself in this movie. The audience could not really tell if Cary is a good guy or a bad guy in this film. You don't really know what kind of person Grant is until the end of the film. The ending will surprise and maybe even upset some, but that is what Alfred Hitchcock films were all about.

3. PENNY SERENADE (1941)
If you want to watch a real tear jerker then watch this film. My grandfather got me into this movie as a teenager, and I am not embarrassed to say the film makes me cry every time. The movie is about the trouble a couple (Grant and Irene Dunne) are having trying to have a baby. Grant was robbed when he did not win an Oscar for this performance. Now that I am a proud parent the film means even more to me now. 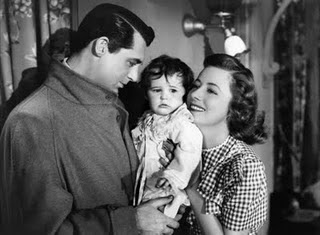 2. NORTH BY NORTHWEST (1959)
This film marks the last time Cary Grant would work with Alfred Hitchcock, and what a movie it was! The movie is on the long side, but Grant plays a man who loses his identity to the point that it truly pulls you into the movie. The movie has everything from witty Grant dialogue to suspense that literally jumps out at you. One of the most memorable scenes is Grant running away from the crop duster. Grant literally takes the audience across country, and he tries to prove who he really is.

1. ARSENIC AND OLD LACE (1944)
This film is not only my favorite Cary Grant movie, but it is my favorite comedy of all-time. Only Cary Grant, under the direction of Frank Capra can make two murdering aunts hilarious. Grant goes from a mild mannered author in the beginning of the movie to a manic and crazed person by the end of the film. Even though Cary is the focal point of the movie, the supporting cast of Raymond Massey, Peter Lorre, and Jack Carson add charm to the movie as well. This is a good film to watch at Halloween - it is not too spooky but good clean fun. You don't even have to be a classic movie fan to love this film, because the comedy is timeless like all of Cary Grant's movies... 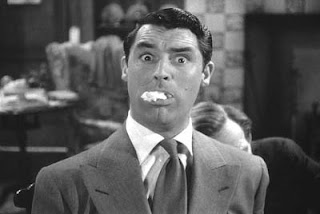