THE LAST DAYS OF JOHNNY CASH 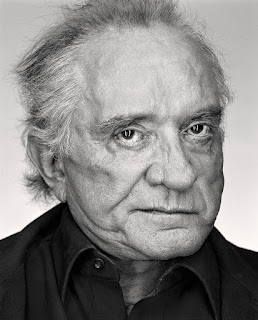 When Johnny Cash married June Carter in 1968 shortly after proposing to her onstage in Ontario he wed himself not only to his steadfast guardian angel, not only to the disarmingly attractive and intelligent woman who co-wrote the country standards "Ring of Fire" and "Kneeling Drunkard's Plea," and not only, as his daughter Rosanne Cash noted, to the grand tradition to which she was heiress; he also married himself to her unwavering faith. It would be tested. "I spoke to Johnny maybe a half-hour or an hour after [June] passed away," Rick Rubin said, recalling the severe pain Cash suffered upon the death of his wife in 2003, just months before his own death, "and he sounded, by far, the worst I'd ever heard him. He sounded terrible. He said that he'd experienced so much pain in his life and that nothing came anywhere near to how he was feeling at that moment." When Rubin asked whether Cash would be able to find some sliver of faith inside him still, Cash "became a different person. He went from this meek, shaky voice to a strong, powerful voice, and he said, 'my faith is unshakable!'"

Though it was unexpected that June Carter would die before her husband who had been so famously ailing and recovering for so many years, it now seems inevitable that in his very last recordings Cash would be left in irreconcilable solitude, left alone with his past and his work, that he would not be able to pin all of his earthly redemption on the woman who, under the unceasing pressure, herself finally broke. The unwavering faith that Cash asserted so strongly when talking to Rubin signified a fidelity to June's memory that it seems Cash was not often able to maintain when June was alive, despite the public fable to the contrary (there is a reason why the movie didn't wade too far into their marriage). If many of Cash's songs attesting to his love for his wife and family had a disappointing schmaltz about them, a sort of patriarchal sanctity and repose, then the songs he sang after June's final departure—most especially his cover of Hank Williams' "On the Evening Train" on "American V" — captured all the stoic longing and loss that permeate his finest recordings. But prior to June's death, and aside from the fiery duet "Jackson" that they recorded before they were even married, the domestic songs Cash wrote and recorded for "American Recordings" were about as good as he got on the topic. 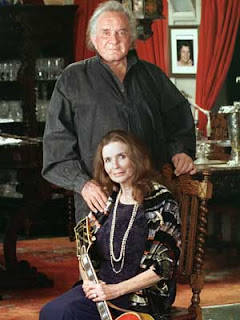 A modest composition, "Like a Soldier" gestures backwards at Cash's great trials and misadventures. "The wild road I was ramblin,'" he sings, "was always out there callin'/and you said a hundred times I should have died." Cash was drawn to images that resonated with his seeming domestic happiness, famous past wildness and sung history all at once; it is as though the mature Cash's artistic struggle was to find ways to sing of home without having to hang up his spurs and tie on an apron, to pull his emblematic self indoors and into the proximity of other selves without extinguishing all of its lonesome strength. Perhaps this is why the late Cash kept dredging up his lawless past, tying it to his present tameness by claiming that the wild road was the one that brought him to June. In the liner notes to "Unchained," Cash recalled how he and the Tennessee Three had pushed June too far while out on tour and she lashed back, disciplining them. "So beginning that night, she began the long, slow process of trying to tame me, and how sweet it was," Cash wrote. "But that streak was hard to get me off of." In "Like a Soldier," that wild streak reveals itself as the war, the lawless ways and the crazy days he no longer had to live up to, but: "Sometimes at night," Cash also wrote in those liner notes, quoting the lyrics of a Bob McDill song he once recorded with compadre Waylon Jennings, "when I hear the wind, I wish I was crazy again." 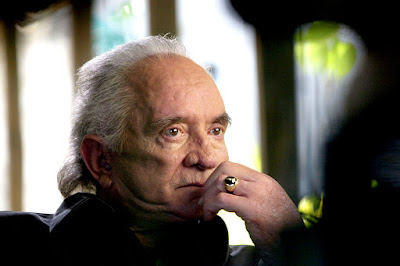 It is in such bittersweet maturity that the late Cash sounds most fully like himself, able to acknowledge and thereby overcome the temptations of his past while also finding a small tragedy hidden inside that very overcoming. "Like a Soldier," though, treads a thin line between celebration and gloating, threatening to dry out inside its rarefied happiness, up where catharsis no longer needs to exist. Listening now, however, after both Johnny and June have passed on, a new pathos is present in the song, one that was not there while they were alive. The impermanence of Cash's victory comes through, casting a different kind of light on the song's victory march. Cash wrote "Like a Soldier" as though his battle were over, as though his decades with June were not filled with addictions, betrayals, near divorces and ostrich attacks (Cash was nearly killed on their property after picking a fight with an angry ostrich that leapt up and brought its razor sharp foot down Cash's belly, nearly disemboweling him). But now, after their deaths, the fairy-tale marriage Cash so publicly promoted sounds like a necessary stay against chaos, a calmness circled by oblivion. The haunting that Cash sang about—"there are faces that come to me/in my darkest secret memories/faces that I wish would not come back at all"—now seems like a flipped negative of the last few months of his life, when Cash was so near to blindness that he had a large portrait of June painted inside their home so her face would remain present for him, keeping him company. "Back in his office, the pictures of June's warm face around him, he would grieve," writes Michael Streissguth. "He picked up the telephone and pretended to talk to her." As Streissguth describes it, each evening arrived with a melancholy ache:

At night, his darkness was filled with her elusive image. He dreamt that she was calling him, that she was next to him. Sleeping alone in their room disquieted him, so he moved to a small hospital bed in his small book-lined office. There his daughters could hear his muffled sobs. "I would think I heard him calling me or something," says Cindy, "and I would go in there and he would be, 'I miss her.' Just like a child. He would talk to her. It was devastating." 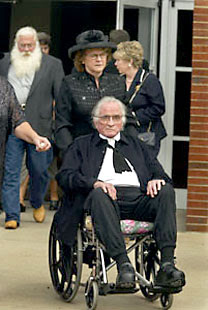 Inevitably, his spirits collapsed as the sun fell. The gloaming, he'd say, invoking the Scottish term for evening, was the hardest part of the day.

At the July 5, 2003, concert (his last public performance), before singing “Ring of Fire”, Cash read a statement about his late wife that he had written shortly before taking the stage:

The spirit of June Carter overshadows me tonight with the love she had for me and the love I have for her. We connect somewhere between here and heaven. She came down for a short visit, I guess, from heaven to visit with me tonight to give me courage and inspiration like she always has.

Cash continued to record until shortly before his death. His final recordings were made on August 21, 2003 and consisted of "Like the 309," which would appear on American V: A Hundred Highways in 2006, and the final song he completed, "Engine 143," which was recorded for his son John Carter Cash for a planned Carter Family tribute album. Johnny went to join his beloved wife June on September 12, 2003—less than four months after her death... 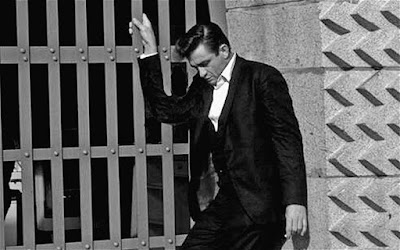