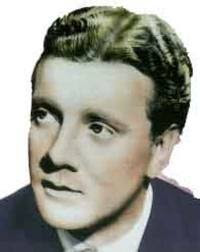 Back in the days of wholesome radio entertainment, Bing Crosby and Tommy Dorsey used to do a routine that had as its punch line the question "I wonder where Dick Todd is tonight?" The question always got a laugh because Dick Todd was perceived as North America's most accomplished Bing Crosby imitator, emulating Der Bingle so closely as to become known as the Canadian Crosby (other influences were British vocalist Donald Novis and Canadian crooner Russ Titus).

Handsome and husky-voiced, romantic baritone Dick Todd was also dubbed King of the Jukebox. During his brief heyday from 1938-1942, Todd recorded about 200 songs for RCA Victor's Bluebird imprint, enabling him to compete with Decca's main attraction (Crosby) and Okeh's Buddy Clarke. Each of these dashing devils could be heard for the budget-line price of just thirty-five cents for each 78 rpm record, or seventeen and a half cents per song.

Dick Todd's story would make an excellent old-fashioned motion picture, preferably filmed in 16 mm black-and-white. Born on August 4, 1914 on a farm near Calgary, Alberta, Canada, he was the son of a retired military officer who moved the family to Montreal around 1926. Todd played the trumpet and sang, first in school and then at the Belmont Amusement Park with a small band led by George Sims. This led to steady work at a nightclub at Lake Champlain called the Meridian. After lukewarm attempts to earn degrees in agriculture and engineering, Todd directed his energies towards putting songs across over the radio and doing commercials for Maxey Baking Powder. Backed by his own quintet (including trombonist and alto saxophonist Murray McEachern), Todd sang and blew his trumpet on cruise ships in the Caribbean during the tourist season. All of this activity paid off when he found himself signing his first Victor contract in Montreal.

In 1936 he recorded several pop tunes including "I'm an Old Cowhand" and "Girl in a Bonnet of Blue." After Sims' group was taken over by Ted Large of the Five Large Brothers, Todd began performing almost exclusively in the broadcast studio backed by orchestras under the direction of Lucio Augustini and Alan McIver. It was these programs, which aired during the years 1937-1938, that enabled Dick Todd to develop a following among radio audiences in the northeastern United States. 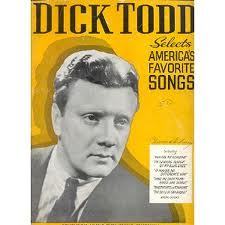 Todd's next move was to chuck the trumpet, cross the border, and begin singing in recording and broadcast studios, churning out a steady stream of popular records under the supervision of Leonard Joy and Eli Oberstein and transmitting his voice to the masses via programs like the Home Town Show, the Magic Key (with Larry Clinton's Orchestra), Old Gold's Melody & Madness (with Robert Benchley and Artie Shaw's Swing Band), and Brown & Williamson's Avalon Time Show (with comedian Red Skelton). He also made the first of several recordings with Dinah Shore and sang with Leo Reisman's Orchestra at the Strand Theater.

In 1940 Dick Todd appeared in the series Showboat with Nadine Connor and Virginia Verrill, with Paul LaValle on the Chamber Music Society of Lower Basin Street show, and sang "When Irish Eyes Are Smiling" in a film short with Richard Hayman. For a little while he hosted his own program. Dick Todd's biggest hits from this period include "Blue Orchids," "Deep Purple," "To You, Sweetheart, Aloha," "All This and Heaven Too," and "The Gaucho Serenade." When it was time for Todd to serve as a Canadian citizen in the Second World War he generously set up Ted Weems' crooner Perry Como as his replacement at Victor.

Like most everyone who worked in showbiz, Dick Todd devoted himself to entertaining the troops during wartime. Afterwards, his career began to slip into a gradual but steady decline that would end in utter obscurity and abject poverty. In 1945 he replaced Lawrence Tibbet on Your Hit Parade and shared the microphone with Joan Edwards, but was given the boot in January 1946 to make way for Johnny Mercer. Not to be deterred, Todd signed on with the Larry Sunbrook Circus, barking endless streams of blarney as Master of Ceremonies and singing while riding a horse (a skill he'd developed while growing up in Alberta). 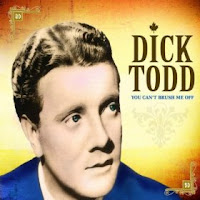 He spent a lot of time appearing in night clubs, and did manage to make more records. One of these, a 1949 recording of "Daddy's Little Girl," achieved something like hit status. Throughout the '50s his popularity continued to fade and he returned to circus work in 1955 but only as a roustabout. Every once in a while he cut a few singles for Decca. His last known recordings, made in 1969,included "Big Wheel Cannnonball" and "Pennsylvania Turnpike,I Love You."

In the late 1960s, Dick also made appearances on Joe Franklin nostalgia show. Two disorders that brought him down were chronic alcoholism and debilitating arthritis. He was last seen working as a stagehand among the ropes behind the scenes at the Ed Sullivan Show at the Coliseum and at Studio 50 in New York. From there he is believed to have hit the skids and become a homeless wino. The last known sighting of Dick Todd was in a VA hospital in 1973, where was interviewed for an LP collection of his hits.

The circumstances, date, and location of his death was never established until his son finally revealed that his father died homeless in 1974, and his ashes were scattered into the ocean near New York. Todd's son held on to the information until 1999 due to his estrangement to his father.

While Dick Todd definitely had a way with a song, unfortunately his private life was never that melodic. He died alone and forgotten - but his many excellent recordings never will fade away...
Posted by David Lobosco at 7:04 AM