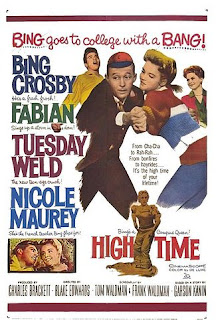 Early on in Bing Crosby's movie career, he made a film called College Humor in 1933. Even in 1933, Bing was a little old for college antics at the age of 30. However, over 25 years later Crosby filmed another college movie. The movie High Time used the fact that Bing was aging to its advantage in its storyline. The film is told from the perspective of a middle-aged man who enters the world of a new generation of postwar youth. In the years since its release, High Time has come to be viewed as a comedic study of the slowly emerging generation gap between the music and mores of an older generation and postwar youth, as well as an inadvertent time capsule of American adolescents and lifestyles in 1960.

Wealthy restauranteur Harvey Howard (Bing Crosby), a self-made man, widower and owner of "Harvey Howard Smokehouses", decides to go back to college at the age of 51 and earn a bachelors degree. He faces opposition from his grown snobbish children, as well as a generation gap between himself and his much-younger fellow students. The first day in school he finds that just convincing older students, faculty and the admin personnel is a humorous task. He enrolls and receives freshman rooming, and is up front about his determination to be "just another freshman". Being assigned a quad rooming arrangement, this sets the standard for the upcoming years. Dealing with the student press, the dorm adviser and making that first toast with sauerkraut juice to seal their bond to complete their four years together.

The President's welcoming speech sets the tone for the effort facing the freshman class. Harvey has to convince the Physical Ed coach that he has what it takes to compete by doing ten plus one pull ups to the cheers of his fellow younger frosh, only to collapse on his face upon finishing his set. Another frosh challenge is the bonfire that must exceed the height of the prior years. Harvey meets the French professor, Helen Gauthier when removing a supporting wooden chair from her porch. The bonfire's total height comes up a foot short, Harvey climbs to the summit and deposits his three-foot chair, a very brave and daunting achievement. Having two brilliant roommates and jock Gil Sparrow (Fabian), the academic rigors are always fuel for comedy and camaraderie. Science Professor Thayer, is haphazard, and suffers numerous comedic moments, chemicals that take on a life of their own, pairs of wires that should never be brought near each other during a storm, zap, and improving one's skating skills except on thin ice. 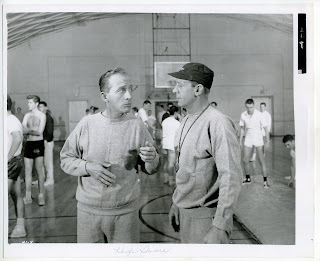 Sophomore year again has Harvey being berated by his children, the school's beat reporter is there to welcome him and puts up with the snobby kids. Harvey is off to meet his last year's roommates and the requisite toast to success. He is asked to join their fraternity and has the usual hazing period to endure, polishing shoes, washing floors and the most challenging, dressing in drag and getting a retired colonel to sign his dance card at a costume ball. The elderly southern gentleman is suffering a gout attack and his social climbing children are attending the same event. While dancing with his son, he so discombobulates him that his dress is torn in half, and while having it fixed in the ladies lounge he floors his daughter. Back on the floor, Harvey bribes the band leader to play "Dixie", the colonel stands, Harvey pounces into his arms dancing the length of the floor, deposits the sputtering Colonel on his easy chair has him autograph his dance card, throws his wig into his lap and rushes the exit. The rest of the year is full of great football by Gil, academic pressure and more antics by Prof. Thayer. 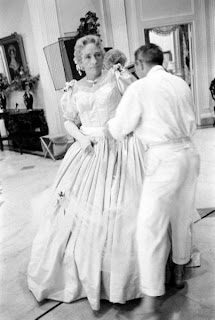 Junior year starts with Harvey arriving in a red Mercedes convertible, and meeting the group at a "Harvey Howard Smokehouse" for a toast of goat milk, which only T.J. Padmanagham likes. The Smokehouse maitre D' at Harvey Howard's, super-snob Burdick doesn't like one bit of this. His first task is to rudely challenge the group to order their meals which is fine with Harvey who orders Harvey Burgers with special sauce for the lot. Burdick sneers back that it's too early for the special sauce, Navy Brat, Bob Bannerman chimes in with " . . . it's later than you think". The burgers arrive and are dry, carbonized and inedible. Harvey, who stands behind all burgers served in his Smokehouses, calls Burdick over to "take them back", Burdick challenges Harvey to do better, which he does. Burdick watching Harvey jump to it at the grill catches Harvey Howard's full name and faints. Burdick completes eating a burger prepared by Harvey and becomes a transformed Harvey employee, hilarious. Over the summer prior to Junior Year Harvey had hired Professor Gauthier to tutor him at Nags-head, his children in turn complain to the college and it appears that Gauthier has to resign to save face. The students protest and the President delays any action until the next Spring.

Senior Year, Harvey shows up in a taxi, the group gathers and toast their final year, both Harvey and Gil are still hitting the books hard, with some success. Hay rides with phone booth body jams and a smooth procession towards graduation. Harvey is in denial about his love of Professor Gauthier and she coyly asks him would he like to marry her, he stammers, but the gauntlet is cast. Harvey is the Class of 1960 Valedictorian and his speech covers all the bases, why he challenged himself to find a greater purpose, put up with the struggle, his growing admiration and acceptance of his adult children and his friends own accomplishments. One final challenge is for them to never quit and say something like " I could no sooner do that, than I could fly ", a perfect entry into Harvey being hoisted above the audience on cables to fly around the auditorium. A wink to Professor Gauthier, a smile to all, the end.

High Time was scripted by Garson Kanin, Frank Waldman and Tom Waldman. It was originally titled "Big Daddy", with the starring role to be played by Gary Cooper. When Cooper's terminal illness forced him to turn down the role, Bing Crosby was signed as lead, and the script was revised to his requirements. It was filmed in Stockton, California, at the University Of The Pacific, Stockton Junior High School, Amos Alonzo Stagg Senior High School and other locations in Stockton. Bing had control over who would be his co-star and he campaigned for Nicole Maurey who had played Bing's wife earlier in Little Boy Lost (1953). Crosby also would introduce the song "The Second Time Around" in the film. It would be the last Crosby song to be nominated for an Oscar, and it has since become a musical standard. 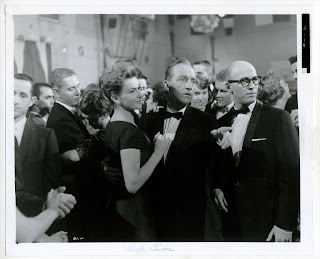 I have always enjoyed this later Bing Crosby effort, even though I have some complaints about the film. It seems like during their junior and senior years the film is kind of rushed or cut, like there was more the director wanted to show. I am not sure if that was the case or not, or maybe the editing was just more abrupt than it should be. I am sorry for you Fabian fans out there, but I wish there would have been less Fabian in the movie. I know he was the big draw in 1960, but he was no Der Bingle. Also, I know this is a comedy and not really a musical, but I wish Bing would have been given more chance to sing. All in all this 1960 comedy farce is really worth seeing. If you haven't seen this Bing film yet don't you think it is "high time" that you do?