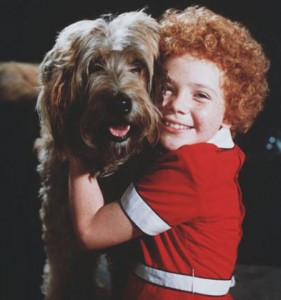 One of the memorable movies I remember seeing as a child was 1982's Annie. I am not afraid to say that I love this movie to this day. The movie was not the best musical Hollywood ever produced, but its a fun movie to watch. The film was directed by John Huston, written by Carol Sobieski, choreographed by Arlene Phillips with musical sequences created by Joe Layton, and features an ensemble cast consisting of Albert Finney, Carol Burnett, Ann Reinking, Tim Curry, Bernadette Peters, Geoffrey Holder, Edward Herrmann, and Aileen Quinn in her feature film debut.

The producer of the film, Ray Stark, wanted both John Huston and Joe Layton while working as the director and choreographer respectively, to also be executive producer on the film, because it was too large an enterprise for one person. Regarding Huston being given the job of directing the first (and what would be the only) musical in his 40-year directing career, screenwriter Carol Sobieski said: "Hiring John [Huston] is an outsider risk, and Ray's [Stark] a major gambler. He loves this kind of high risk situation."[

For reasons yet explained, it was planned that the staging for the intimate, secretive song "Easy Street" would be the biggest number in the film. A special outdoor street set, costing $1 million, was built, and it took over one week to shoot the scene. However, the final number was thought to be "overstuffed" and "sour." Nearly two months after the film had finished shooting, an indoor, more intimate number was shot that mimicked the ambience portrayed in the original 1977 musical.

The production filmed for six weeks at Monmouth University in New Jersey, which has two mansions that were used in the film, one of which is the Shadow Lawn Mansion (now known as Woodrow Wilson Hall). An abandoned railroad bridge over the Passaic River in Newark was used for location shooting of one of the climatic scenes.

There are major differences between the original Broadway show and the movie version. The film featured four new songs, "Dumb Dog", "Let's Go to the Movies", "Sign", and "We Got Annie", and cut "We'd like to Thank You, Herbert Hoover", "N.Y.C", "You Won't Be an Orphan for Long", "Something Was Missing", "Annie", and "New Deal for Christmas". In addition, the song "Maybe" has two reprises while "Little Girls" and "Easy Street" do not.

In the stage musical, Miss Hannigan, Rooster, and Lily are caught at the Warbucks mansion, thus their plan to kidnap Annie fails as they are arrested by the President's Secret Service. In the movie, Annie is kidnapped, leading to Warbucks organizing a citywide search and while escaping, Rooster chases her up the B&O Bridge. Miss Hannigan's heart softens and she also attempts to rescue her from being killed by him, but he knocks her out and continues the chase. Eventually, Punjab rescues her by autocopter and returns her safely at the end. Miss Hannigan is then shown joining in the celebration at the end of the movie and showing a possible romantic interest in Punjab.

In its initial release, the film made $58 million dollars, but it cost $50 million to make. The casting of British actor Albert Finney as Daddy Warbucks was interesting, because he did not have much of a singing voice. He made one movie musical earlier - Scrooge (1970) in London. I am also surprised that Bernadette Peters did not have a bigger role in the movie. By 1982, she had made some great movies like The Jerk (1979) with Steve Martin, but her role was minor in this film. Carol Burnett made the movie for me. No matter who I see play Miss Hannigan, Burnett made that role hers. She is the best part of the movie. Reportedly, Burnett would know when it was one of the child actor's birthday party and throw them a little party on the set. Also, when Annie celebrated its 30th anniversary in 2012, Burnett sent star Aileen Quinn a gold locket that read "Always my Annie". Just know those stories makes watching the movie a heartwarming experience, and it makes you definitely realize that the sun will always come out tomorrow...

Posted by David Lobosco at 5:44 AM