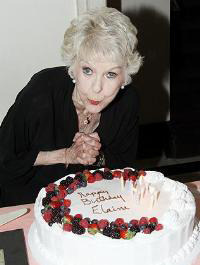 Ms. Stritch, the husky-voiced actress who, with a Tony Award and three Emmys to her credit, became a beloved cabaret star in recent years at the Carlyle Hotel, said on Wednesday that she was giving up her apartment there and returning to her home state, Michigan. But not before she performs one last show, “Elaine Stritch at the Carlyle: Movin’ Over and Out,” from April 2 to 6.

Mere mention of the word “retirement” drew a gasp and flat denial from Ms. Stritch, who is 88. “What actor would ever say they’re done?” she fairly shouted over the telephone.

Still, in fragile shape after two recent falls and a hip replacement, she said she knew it was the end of an era.

She arrived in New York 71 years ago from Detroit, eager to become a star, and enrolled in finishing school on the Upper East Side — not far from where she lives today — while studying acting. Within four years she was making her Broadway debut, in the 1946 flop play “Loco” and soon after appeared in her first Broadway musical, “Angel in the Wings.”

In the decades since, she became an interpreter of Stephen Sondheim, earning a Tony nomination for singing “The Ladies Who Lunch” in “Company,” and battled alcoholism and diabetes while embodying the grittiest of gritty broads on television (including on “30 Rock,” as the mother of Alec Baldwin’s character) and in her one-woman show “Elaine Stritch at Liberty.” Her last turn on Broadway was in 2010, as Madame Armfeldt in the revival of the Sondheim-Hugh Wheeler musical “A Little Night Music.” A film documentary on Stritch is also nearing completion.

“I loved being on Broadway, but performing has become exhausting, and I just don’t want to live in New York anymore,” Ms. Stritch said from her home of 10 years, Room 309 of the Carlyle. “I’m just sick of the competition in New York, the feeling that I always have to rehearse to keep up my performance. I don’t feel like rehearsing, even though it should be my favorite thing in the world to do. 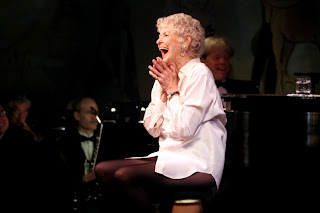 Ms. Stritch has bought a three-bedroom condo in Birmingham, Mich., not far from where she grew up, and close to several nieces and nephews. Her two older sisters from Michigan have died; her husband, the writer and actor John Bay, died in 1982.

One published report said Ms. Stritch had paid $1.5 million for the condo, but on Wednesday she didn’t have the exact price on the tip of her tongue. “It’s much too expensive, much beyond my means, but who cares?” she said.

While Ms. Stritch’s previous engagements at Café Carlyle have been heavy on Sondheim and other standards, she said she hadn’t settled on a set list — and wasn’t sure how much she would sing during the hourlong act.

“Sondheim is a devil, with those lyrics to keep straight, and part of me just wants to tell stories,” Ms. Stritch said. “I’d love to just tell jokes that my dad kept in his wallet.”

In a warm review of her Carlyle show in 2011, Stephen Holden of The New York Times noted that “the obstacle facing Ms. Stritch is her failing memory for lyrics and for patter.” On Wednesday she said her memory had declined further; she hit her head and eye in one of her recent falls. She said the farewell show was a mutual decision by herself and the Carlyle... 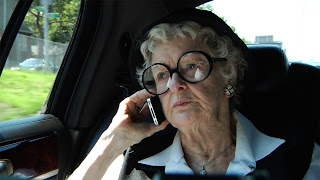 SOURCE
Posted by David Lobosco at 4:45 AM