GUEST REVIEW: PLAINSMAN AND THE LADY 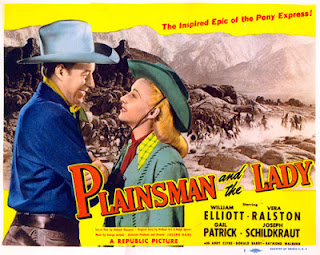 I am not a huge fan of westerns, so I figured I would broaden my horizon by featuring another guest review from our resident movie guru Bruce Kogan:

Plainsman And The Lady is a fanciful telling of the founding of the Pony Express hardly anything close to the truth, but a nice tale nonetheless. Wild Bill Elliott stars as a saloonkeeper who throws in with Russell, Majors, and Waddell the western freighting outfit who organized it. The real life characters of Charles Russell and Senator William B. Gwin of California are played by William Davidson and Russell Hicks respectively.

The banker footing a large part of the bill for the Pony Express is Charles Judels who is from Germany written that way to accommodate screen daughter Vera Hruba Ralston's accent. Judels has a second wife in Gail Patrick a real schemer who married Judels for a life of comfort. She's two timing the sick Judels with chief villain Joseph Schildkraut.

Two of the best movie bad people around Schildkraut as always when he does villains is a slick piece of work. He owns a stagecoach line and he stands to lose mail contracts to the faster moving Pony Express so he employs a variety of maneuvers, some involving the unhappily married Patrick to stop the line. As for Patrick she's working her own agenda and determined to be the top dog however things come out.

The first 3/4 of the film is set in St. Joseph, Missouri, but the last quarter is on the frontier itself with enough action and gun play to satisfy any western fan. This Republic western with its adult themes was definitely not marketed for the Saturday matinée kids.

Also in the cast are Raymond Walburn as his usual garrulous character, a judge this time, Don Barry as a murderous punk in Schildkraut's employ and Andy Clyde as Elliott's sidekick. All players that I enjoy seeing in any film.

Bill Elliott was given some good westerns to do by Republic's Herbert J. Yates with larger budgets than his normal Saturday matinée cowboys got. I got the feeling that Elliott liked these films better than the Red Ryder stuff he was doing before and was hoping to make the same quantum leap in career that John Wayne did. Sad to say for him that never came. But Plainsman And The Lady is still a fine western if not exactly truthful about the founding of the Pony Express... 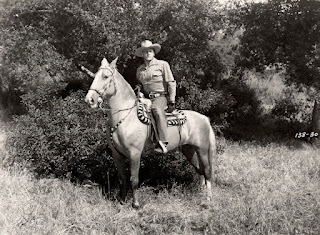