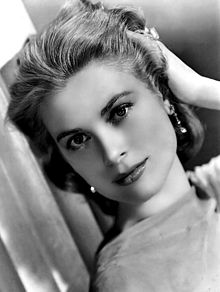 Born in 1929, Grace Kelly came into the world knowing she was beautiful. That beauty made one of three career choices natural for her - a model, an actress, or a princess. Kelly basically did all three. George Kelly, Grace’s uncle and a very successful playwright, helped her gain admission to the American Academy of Dramatic Arts, a prestigious acting school in New York. Before her acting career, she modeled successfully. Grace just so happened to be at a friend’s fashion shoot and the photographer noticed her and quickly arranged for her to be on the front cover of Redbook magazine as the cover model. Grace made her Broadway debut in “The Father” by Strinndberg.

In her first appearance on the silver screen she played a minor part in a box-office failure called “Fourteen Hours”. Her first starring role was in “High Noon”. In her acting career she came across very shy and rumors say she had intimate romances with many of her co-workers. Some of these men included Clark Gable, Bing Crosby, Ray Milland, William Holden, Oleg Cassini, and Jean-Pierre Aumont, just to name a few. It doesn’t sound as though Grace had a problem with being shy with all of her boyfriends. In one specific incident an observer remembered attending a lunch given by Aristotle Onassis. Grace accompanied Cary Grant. The Observer wrote: ”Grace said little during lunch, and when it was over, Onassis took Cary aside and invited him back anytime. ‘And please,’ the billionaire said, nodding towards Grace,’ bring your secretary along with you." Grace was so quiet that Aristotle believed her to be Cary’s secretary instead of
his co-worker.

Around 1954, she met her future husband at the Cannes Film Festival. A journalist arranged for her to meet His Serene Highness Prince Rainier Grimaldi of Monaco, one of his 142 titles, and she canceled the meeting because of an appointment with a hairdresser. Rainier did, however, keep in touch with Grace and in December of 1955 he traveled to the United States to join the Kellys’ for their annual Christmas party. Only three days later Grace and Prince Rainier announced their marriage plans. They were married on April 19, 1956. Grace was 26 years old and fit the princess role perfectly. Even if she hadn’t been born to royal blood, she was beautiful, famous, and a devout Roman Catholic from a wealthy background. 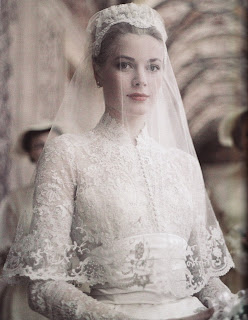 There were about 1,500 journalists who decided to cover the marriage and just as Princess Diana was mobbed by the paparazzi, so were Grace and Rainier. The royal family was in the news often with pictures published when each of their two daughters and son were born, of family vacations, and holidays. Princess Grace and Princess Diana had similar life stories in that they wereboth humanitarians, worked hard for charitable causes, gave up careers to marry into royalty and have families, and their lives both ended tragically in car accidents. The differences between the two were that Princess Grace was driving and not the chauffeur, and the paparazzi weren’t involved. It is said that Princess Grace and her youngest daughter Stephanie were arguing over Stephanie’s plans to join her boyfriend, Paul Belmondo (son of the famous actor Jean-Paul Belmondo), and Princess Grace excused their driver to continue their conversation in private. According to a reliable source, Princess Grace was seen at the wheel of their Rover, however other rumors say that Princess Stephanie was at the wheel illegally. There was a truck driver behind the vehicle who recalls, ” It was honking in warning as it swerved dangerously around the highways sharp curves.” Also, according to the truck driver, “ as the Rover  approached the fatal turn, instead of slowing down it appeared to accelerate suddenly and sail straight over the edge of the cliff. After shearing off the tops of several trees it rolled over and came to a stop upside down in a ravine.” 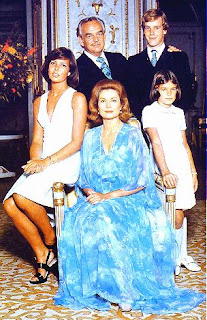 Nobody knows what really happened on that fatal day. Princess Stephanie refuses to talk about that specific day even though it would clear up the rumors and stories. Princess Stephanie suffered minor injuries compared to her mother who suffered head trauma. A CAT scan after the accident it showed that Princess Grace’s brain had been damaged in two different places. One was from the trauma of the crash and the other appeared to have been a stroke, although it was impossible to tell if the stroke caused the accident or if the accident caused the stroke. Princess Grace was put on life support and her family had to make the difficult decision of deciding whether or not to end the artificial life support. The family decided that they were going to “pull the plug” -as it is  said. Princess Grace died on September 14, 1982, after languishing in a coma for over 24 hours. The saddest part about the accident has to be that her death might have been prevented if she had been wearing her seat belt.

Whether it was driver error or a stroke, the public will never truly know. Grace Kelly only made eleven movies, but in each film she captivated audiences. Whether dancing with reporter Frank Sinatra or the sexy love interest of cat burglar Cary Grant, Kelly became every role she played. Kelly did the same thing when she became the princess of Monaco. Even though her life was tragically short, while she was alive she seemingly lived the story book life. Grace Kelly moved to Hollywood, married her prince, and almost lived happily ever after. Two out of three was not too bad... 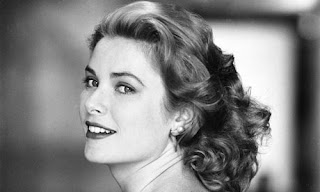 Posted by David Lobosco at 6:15 AM