Reportedly while walking down the Hollywood Boulevard one day, Charlie Chaplin  saw a large poster in front of a movie theater that announced a new film comedy in which Douglas Fairbanks played.

There was a young man standing there, and Chaplin asked him:

- Hey, have you seen this movie?

- Of course! – the young stranger answered.

- Is it funny? – asked Chaplin.- What a stupid question. I died laughing. Fairbanks is the best.

- Much better than that wretched Chaplin, for whom I only feel pity. – continued the young man.

- If so, let me introduce myself. I am Charlie Chaplin! – Chaplin angrily exclaimed.

- I am pleased to meet you. I am Douglas Fairbanks! 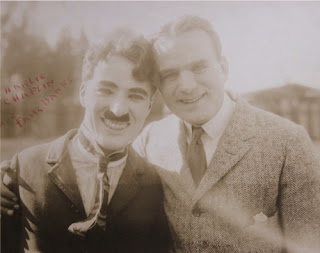 After this unusual acquaintance, Chaplin and Fairbanks became very good friends. During World War I, they teamed up with Mary Pickford and toured the country at rallies to help sell Liberty bonds to help finance the war effort. The two even decided to form their own motion picture studio together, along with Pickford and director D.W. Griffith. That studio, United Artists, in one form or another continued to exist to this very day (although the current United Artists is pretty much just connected by the name only)!

The duo remained friends, even when Fairbanks's movie career started to slide in the early 1930s. On December 12, 1939, at 56, Fairbanks had a heart attack in his sleep and died a day later at his home in Santa Monica. By some accounts he had been obsessively working out against medical advice, trying to regain his once-trim waistline. Fairbanks's famous last words were, "I've never felt better". His funeral service was held at the Wee Kirk o' the Heather Church in Glendale's Forest Lawn Memorial Park Cemetery where he was placed in a crypt in the Great Mausoleum. He was deeply mourned and honored by his colleagues and fans for his contributions to the film industry and Hollywood. A monument was erected at the cemetery, and Charlie Chaplin read a rememberance of his friend in October of 1941 at its dedication. It has often been said that Chaplin never recovered completely after the death of his friend, but what is truly known about these two friends is they liked to work hard and play ever harder...

Posted by David Lobosco at 6:14 AM