HISTORY OF A SONG: IN THE GOOD OLD SUMMERTIME 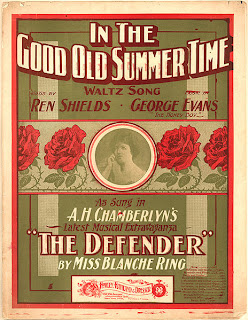 This summer has been a particular hot one where I am. The grass is brown, the heat is unbearable, and I am almost looking forward to fall and winter. I remember whenever I would go out with my grandfather in the summer, he would sing an old song that was written before his father was even born called "In The Good Old Summertime".

"In the Good Old Summer Time" is an American Tin Pan Alley song first published in 1902 with music by George Evans and lyrics by Ren Shields.

Shields and Evans were at first unsuccessfully trying to sell the song to one of New York's big sheet music publishers. The publishers thought the topic of the song doomed it to be forgotten at the end of the summer season. Blanche Ring, who had helped Evans arrange the number's piano score, was enthusiastic about it and at her urging it was added to the 1902 musical comedy show "The Defender" she was appearing in. The song was a hit from the opening night, with the audience often joining in singing the chorus.

"In the Good Old Summer Time" was one of the big hits of the era, selling popular sheet music and being recorded by various artists of the day, including John Philip Sousa's band in 1903. It has remained a standard often revived in the decades since.

The song appeared in many films, including the Judy Garland film named after it: In the Good Old Summertime (1949). The book Elmer Gantry opens with the title character drunkenly singing the song in the saloon.

The song appeared in an episode of the hit PBS show Arthur, and featured in the 1930 Laurel and Hardy short Below Zero in ironical terms, sung during a snowstorm.

The chorus is used with a slight twist in Baylor University's song, "That Good Old Baylor Line."

Billy Murray and Blanche Ring had the biggest hit version of the song, but my favorite version was Bing Crosby's version from 1954. Bing must of liked the song because he recorded it again on his last album "Seasons" in 1977. It's amazing that this song about our warmest but most fun season is over 100 years old... 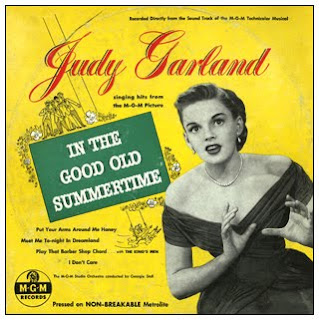 Posted by David Lobosco at 4:19 AM