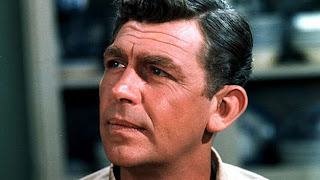 Andy Griffith, a television legend who starred in two iconic series that debuted a quarter-century apart, has died. He was 86.

Bill Friday, former UNC president and a close friend of Andy Griffith confirmed to North Carolina NBC affiliate WITN-TV that he died this morning. The death has not been independently confirmed by NBC News.

Emergency Medical Services responded to an early morning call Tuesday from Griffith's home in Roanoke Island, N.C., according to reports.

Griffith was already a star of Broadway, comedy recordings and film when "The Andy Griffith Show" debuted on Oct. 3, 1960. Griffith starred as Sheriff Andy Taylor of Mayberry, North Carolina, a widower with a young son known only as Opie, played by Ron Howard, who would go on to star as Richie on "Happy Days" before becoming an award-winning director.

With its earworm of a theme song and a cast of eccentric supporting players, including Don Knotts and Jim Nabors, "The Andy Griffith Show" was an instant hit with ratings perennially in the top 10 during its eight-season run.

The show's popularity was so enduring that it spawned a pair of spin-offs, "Mayberry R.F.D." and "Gomer Pyle, U.S.M.C."

Nearly 20 years later, Griffith would emerge anew in 1986 on network TV as "Matlock," an aged country lawyer from Georgia with a southern drawl, a winning smile and an unblemished record in the courtroom.

Though the show isn't viewed with the same esteem as "The Andy Griffith Show"—it was a frequent punch line on shows like "The Simpson"—it would run for nine seasons.

Born on June 1, 1926, in Mt. Airy, N.C., Griffith first gained famed as a monologist, on the strength of his recording "What It Was, Was Football," which is told from the perspective of a backwoods yokel telling of setting eyes on the game for the first time. The recording would be a hit in some parts of the country, earning Griffith an appearance on "The Ed Sullivan Show," and was later turned into a feature in Mad magazine.

In 1996, Griffith would return to the recording studio to cut an album, "I Love to Tell the Story, - 25 Timeless Hymns," which would earn him a Grammy for Best Southern, Country, or Bluegrass Gospel Album.

Griffith is survived by his third wife, Cindi Knight, whom he wed in 1983, and his daughter Dixie Nan, from his first marriage, to Barbara Bray Edwards.

“TV shows come and go, but there’s only one Andy Griffith,” said President Bush upon awarding Griffith the Presidential Medal of Freedom in 2005. “And we thank him for being such a friendly and beloved presence in our American life.” 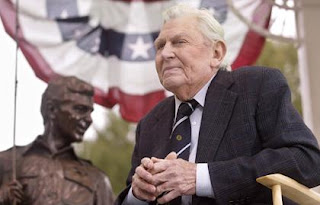 SOURCE
Posted by David Lobosco at 7:31 AM