OLIVIA AND JOAN: THE LONGEST FEUD 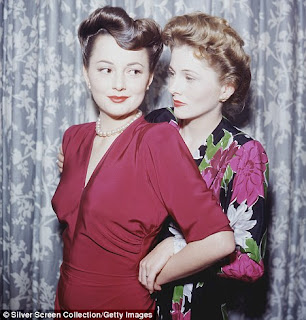 Two years ago, amid the formal splendour of the Élysée Palace in Paris, President Nicolas Sarkozy conferred France’s most prestigious accolade, the Légion d’honneur, on a little, silver-haired lady, then aged 94, with sparkling brown eyes and an impishly familiar smile. That bewitching smile and those amazing eyes once made Olivia de Havilland the queen of Hollywood and the winner of two Oscars. Today, she is the last surviving star of the most famous epic film ever brought to the screen, Gone With the Wind. Her daughter Gisele, and other members of her family, were at the Élysée to watch Miss de Havilland, a resident of Paris for almost 60 years, honoured.

But one member of her immediate family — and the one who has known her longer and better than anyone in this world — her only sibling, Joan Fontaine, then 92, herself an Oscar-winner of equally illustrious status as a legend of stage and screen, was conspicuous by her absence from the ceremony.

When the President placed the blood-red ribbon and star of the Légion d’honneur around Olivia’s neck, Joan was 6,000 miles away at her home in Carmel, California, studiously ignoring the occasion — just as she has ignored every aspect of her sister’s existence for decades.

These two formidable grandes dames of the screen have been at loggerheads for most of their lives. Both frankly confess that, even as children, they detested one another.

Of the two sisters, de Havilland was the first to become an actress; when Fontaine tried to follow her lead, their mother, who allegedly favored de Havilland, refused to let her use the family name. Subsequently, Fontaine was forced to invent a name, taking first Joan Burfield, and later Joan Fontaine. Biographer Charles Higham records that the sisters have always had an uneasy relationship, starting in early childhood when de Havilland would rip up the clothes Fontaine had to wear as hand-me-downs, forcing Fontaine to sew them back together. A large part of the resentment between the sisters allegedly stemmed from Fontaine's perception that de Havilland was their mother's favorite child. 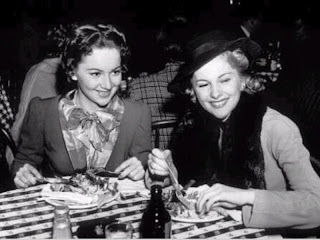 Both de Havilland and Fontaine were nominated for an Academy Award for Best Actress in 1942. Fontaine won that year for her role in Alfred Hitchcock's Suspicion over de Havilland's performance in Hold Back the Dawn. Charles Higham states that Fontaine "felt guilty about winning given her lack of obsessive career drive...". Higham has described the events of the awards ceremony, stating that as Fontaine stepped forward to collect her award, she pointedly rejected de Havilland's attempts at congratulating her and that de Havilland was both offended and embarrassed by her behavior.

Several years later, de Havilland remembered the slight and exacted her own revenge by brushing past Fontaine, who was waiting with her hand extended, because de Havilland allegedly took offense at a comment Fontaine had made about de Havilland's husband. De Havilland's relationship with Fontaine continued to deteriorate after the two incidents. Charles Higham has stated that this was the near final straw for what became a lifelong feud, but the sisters did not completely stop speaking to each other until 1975. According to Fontaine, de Havilland did not invite her to a memorial service for their mother, who had recently died. De Havilland claims she informed Fontaine, but Fontaine brushed her off, claiming she was too busy to attend. 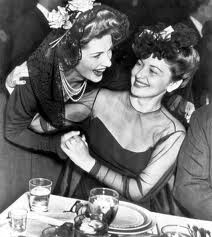 Charles Higham records that Fontaine has an estranged relationship with her own daughters as well, possibly because she discovered that they were secretly maintaining a relationship with de Havilland. Both sisters have refused to comment publicly about their feud and dysfunctional family relationships, though in an interview with John Kobal, Fontaine stated categorically that the so-called rivalry was a pure hoax, cooked up by the studio publicity hounds.

In a 1979 interview, Fontaine says the reason she stopped speaking with her sister was because Olivia wanted their mother (who was suffering from cancer) operated on at the age of 88. Joan also says that when their mother died, Olivia didn't even bother to phone to find out where she could be reached (Fontaine was on tour). Instead, Olivia sent a telegram, but it was delivered to Joan two weeks later at her next stop.

Whatever the reason, it does not look like Olivia DeHavilland and Joan Fontaine will ever mend the fences. This has to be one of the longest family feuds of all-time, and it is the stuff only Hollywood could dream up... 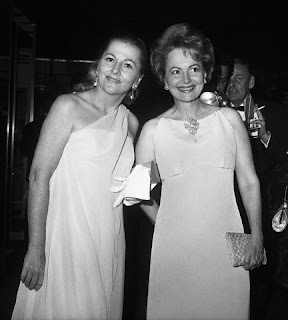 SOURCE
Posted by David Lobosco at 4:17 AM