THE GHOST OF RUDOLPH VALENTINO 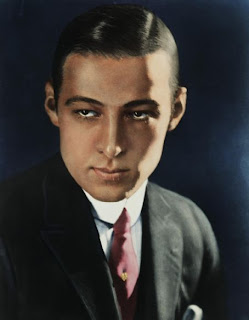 I still remember the first time I saw a picture of Rudolph Valentino. I was only a kid, not even old enough to realize that the man had died nearly 60 years before I was born. At the time I had no idea that Valentino was something of a playboy during his time or that his ghost still roamed.

Rudolph Valentino came to Hollywood at a young age and found some level of success before being cast in the movie The Four Horsemen of the Apocalypse. That movie pushed him into the limelight and made him a true star. Men wanted to be him and women wanted to be with him. The man had an exotic appearance that drew people to him and made him look a little different than other actors at the time.

Valentino played the role of the romantic hero in several movies, which only increased his appeal to his female fans. When he released a book of poetry he presumably wrote himself, that adoration from the public grew tenfold. Since he had such a romantic and debonair persona, some questioned his sexuality and others bluntly stated that he preferred the company of men in private. Valentino fought back against those allegations, but some still wondered.

The actor even married twice in the hopes of ending those rumors. Yet those marriages only added to the rumors. He married his second wife before his first was over and found himself charged with bigamy. Then it was revealed that he had never actually slept with either woman and both were in fact lesbians. Maybe there was something to those rumors after all.

When Valentino was rushed to the hospital, word of his illness quickly spread. Female fans flocked to the site, hoping to catch a glimpse of the famous actor or getting close to him. Fans were so outraged at his death that some fans even committed suicide out of grief. The funeral was private and closed to the public, but that didn't stop thousands of people from gathering outside the funeral home to mourn together. 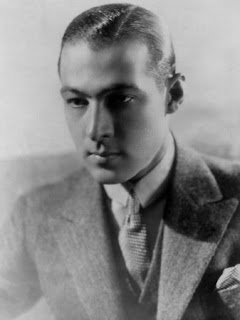 Two women came forward after his death with claims that they were engaged to Valentino: a semi-famous actress by the name of Pola Negri and a lesser known dancer. It would seem like the actor was living up to his playboy reputation all the way up to the end. Not long after the man's body was buried in Hollywood.

The most famous story relating to Rudolph Valentino's death involves the mysterious Lady in Black. The woman began appearing right after his death, always clad in black. She leaves flowers at his tomb and is sometimes seen crying. Even eighty years after his death people still find the flowers at his tomb and sometimes see the mysterious Lady in Black. Is this a special woman in his life, a serious of distraught fans, or maybe the ghost of the original Lady in Black? No one will ever know.

Valentino's death also brought to light rumors of a cursed ring. The actor was rumored to have bought the ring, knowing that it was supposed to be cursed. He wore the ring continuously on the set of one movie that nearly ruined his career. Supposedly he never worse the ring again until days before he died when he decided the stories were lies and put the ring back on.

The story of the cursed ring doesn't end there. Somehow his "fiancée" Negri ended up with the ring and became quite ill herself. She later gave the ring to a man who died a couple of days later. The next owner hid the ring away, but when he finally decided to wear it, he too died. 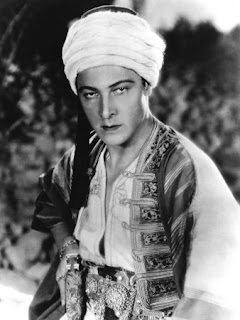 The next owner experienced nothing strange about the ring and wore it for quite a long time without dying or becoming sick. When the ring was stolen from his home though, the robber was killed just minutes later, with the ring in his possession. The cursed ring was then used in the filming of a biopic about Valentino. You guessed it, the man wearing the ring died from a mysterious disease.

The cursed ring somehow disappeared during the 1960s. It was kept in a locked vault at a Hollywood bank, but no one knows exactly what happened to it. Maybe someone destroyed the ring, hoping to end the supposed curse. Then again, someone might be wearing it right now without knowing its history.

Then there are the number of ghosts and haunted spots relating to good old Rudolph. His spirit supposedly haunts the home he was living in when he died. The house was called Falcon's Lair and was later owned by a number of Hollywood celebrities. A number of those people claimed to see his ghost in the house. Valentino's ghost is also rumored to haunt Valentino Place, an apartment building that was also a prohibition era bar. Residents have found the man's ghost in their bedroom late at night.

Valentino has a busy ghost since he also supposedly haunts two other locations. One is the Santa Maria Inn where he had a favorite suite that he often stayed at. The other is a home he owned and lived in while working. In both places people have seen his ghost roaming around and looking like he was happy.

It looks like this is one ghost that isn't yet ready to move on. Maybe he's waiting to find his mysterious Lady in Black... 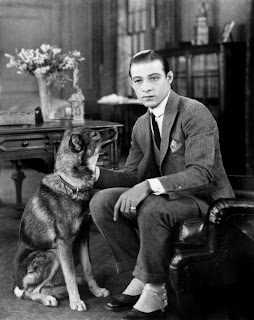 SOURCE
Posted by David Lobosco at 4:26 AM