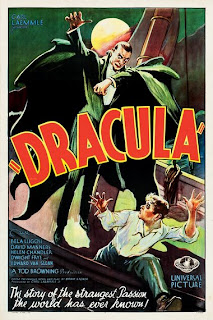 A collection of rare movie theater posters found in a northeastern Pennsylvania attic has fetched a total of $503,000 at auction.

The sale of 33 posters from the Golden Age of Hollywood ended Friday at Heritage Auctions in Texas.

The auction house said a rare 1931 poster for the movie "Dracula" topped the list with a selling price of $143,400. It sold to an anonymous overseas buyer.

A surprise of the auction was the $101,575 price paid for the rare poster of the 1931 movie "Cimarron," the first Western to win the Best Picture Academy Award.

The posters were stuck together with wallpaper glue when they were purchased for around $30,000 at a country auction last fall in Berwick. The rare find was revealed as they were steamed apart...

SOURCE
Posted by David Lobosco at 5:53 AM