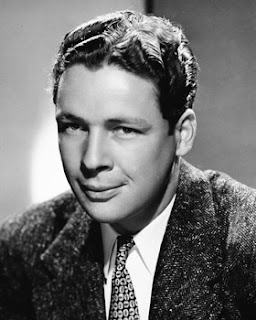 On June 18, 1939, singer Kenny Baker appeared on ‘The Jack Benny Program’ and to all the world it sounded like he would be with the rest of the cast the following week broadcasting from Waukegan, Illinois. He never made it.

He never appeared on the Benny show again.

Benny fans have debated for years whether Baker was fired, whether he quit, whether he left on good terms or bad. It took Baker more than five years before he talked about it. And, even then, it seems pieces of the story are missing. Here’s a syndicated news article from 1944, at a time he was on Broadway and had shot a couple of films, including ‘Silver Skates.’

Kenny Baker Tired of Being Just a Jerk
Walks Out of Job Paying Him $150,000 a Year
By Art Cohn

The world knew him only as the high-voiced dope on Jack Benny’s program who made such incredibly yappy remarks everyone else on the show sounded like an intellectual by comparison, even Phil Harris. Kenny was the all-American oaf and everyone wanted him to remain that way.

“It wasn’t easy walking away from $150,000 a year,” he said last night in his dressing room at the Imperial theatre, “but I realized if I didn’t kill the jerk character it would kill me.”

Kenny had to make his choice: To remain A. Jerk at $3000 a week or to be K. Baker with no offers in sight. It was a big gamble but he took it. He quit Fred Allen’s program more than a year ago and rejected dozens of movie, stage and radio offers—each one wanted him only as a 21-karat Stoopnagle.
“I was doing concerts,” he recalls, “sang with symphonies, went to England and made ‘The Mikado’ but nobody would take me seriously, they thought of me only as a jerk. I couldn't get a straight part to save my soul. That made me mad.”

The fact he has a boyish face and does not look a day over 22, although he is 10 years older, did not help either.

“It’s awfully embarrassing,” he growled. “When I bought a ranch in California last year, the man who sold it to me insisted that my father sign the papers; he didn’t think I was old enough.” 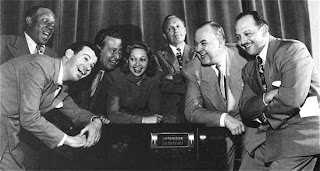 Rather ironical, considering that Baker is, the father of three children—Kenny, Jr., 7; Susan, 4 ½, and Johnny, the 8-month-old baby.
The “jerk,” as he always refers to the character he portrayed on the radio, was an accident.

“Mr. Benny originally hired me only as a soloist,” he says, “after I won a national audition conducted by Eddie Duchin. I was a genuine hayseed when I started on the program. I had lived in Long Beach, California, all my life and had never been on a train, let alone out of the state.

“I was 24, but shaved only once a week. I wore a $22 tuxedo, had the darndest mop of bushy hair and two buck teeth. The first night I stumbled over three chairs and when I was introduced to Mary Livingston I said, ‘How do you do, I am sure.’ It was on the level; that was the way I looked and talked.

“Harry Conn, who was Mr. Benny’s chief script writer at the time, nearly split a gut laughing at me that first night. Then he got together with Mr. Benny and they began giving me hick lines to read...”.

Baker isn’t being altogether forthright when he said “No offers were in sight” when he quit the Benny show. Even if it were true he was under contract to Mervyn LeRoy Productions, as each Benny broadcast reminded listeners, and LeRoy certainly wouldn’t let him sit idle. Not only was he on screens in ‘The Mikado’ in an unjerk-like performance praised by critics, he was also pulling down good cash every Wednesday night as the vocalist on ‘The Texaco Star Theatre,’ starring Ken Murray. In fact, one syndicated newspaper columnist suggested on the day he missed the Benny show in Waukegan that “Texaco would like to have Kenny Baker’s services exclusively.” And that’s exactly what happened. By July 15, newspapers reported Baker’s exclusive contract and that Jack was looking for a new vocalist. 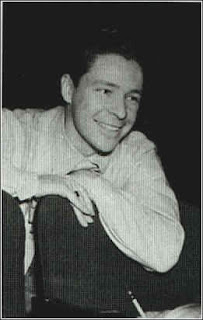 Fans who prefer not to do research have suggested Fred Allen somehow enticed his phoney feuder’s singer away, but Allen didn’t join the ‘Texaco Star Theatre’ until 1940. In a way, Fred joined Kenny’s show.

The article claims Baker quit Allen’s show, but Billboard magazine of August 22, 1942 tells a quite different story. The show was being cut from 60 minutes to a half hour in the fall, which was a perfect opportunity to dump Baker. Reported Billboard: “Baker, who drew $2,000 weekly for singing two songs, proved to be a constant headache to producers because of his alleged prima donna attitude.

“The singer, because of the stipulation in his contract giving him the right to choose his own selections, was allegedly difficult to handle. This might have been worked out, according to an Allen spokesman, but he kept picking slow numbers which consumed anywhere from three to four minutes and which caused Allen a good deal of concern because they slowed the program. Christmas Eve he insisted on doing the Ave Maria in German instead of the customary Latin, an incident which cause Texaco much embarrassment because the mail man brought in loads of protests from irate listeners [remember, the U.S. was fighting Hitler at the time]. This was not the entire reason for X-ing him off the spot, but it helped.

The character that Baker found so objectionable to play on the Benny show was a continuation and modification of the one singer Frank Parker had played on the show. After Baker left, the character was tweaked a little bit more and was handed to Eugene McNulty, along with the name of Dennis Day. If Dennis had a problem playing a daft young man, he never told anyone. It led to a long and lucrative career with Jack, and on his own. In addition, along the way, it was discovered Dennis had a very good ear for mimicry and that was incorporated into the show. And, though all these characters were silly (though not truly moronic like, say, Charlie Cantor’s Finnegan on ‘Duffy’s Tavern’), people weren’t really laughing at them. They had been given comedy lines by Jack Benny, who was the real fall guy on his own programme. 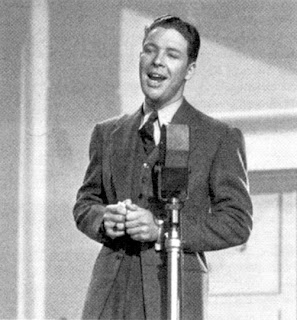 Baker’s hopes of a skyrocketing career after walking away from the Benny show never really materialised, even when compared to Dennis Day. The “weekly half-hour show” mentioned in the newspaper article lasted eight weeks after the story was written and was replaced with Danny Kaye and Harry James. Baker took over ‘Glamour Manor’ (later named ‘The Kenny Baker Show’) in 1946 for a season. He never had a starring radio show after that, let alone one on television. With few prospects, he retired in the early 1950s to record a few gospel albums and, perhaps, mull over whether quitting ‘The Jack Benny Program’ was really the best thing to do. He died forgotten in 1985 at the age of 72...

SOURCE
Posted by David Lobosco at 3:56 AM