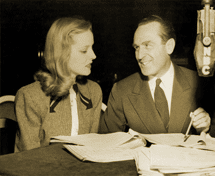 Sadly I missed this death from February of 2012...

An actress and a model, she appeared in 1946's "Temptation" with Merle Oberon, and as herself in "American Masters"' "Harold Lloyd: The Third Genius," and "This Is Your Life: Harold Lloyd."

Cari Beauchamp, who interviewed her for a book on Greenacres, Harold Lloyd's estate, said, "At her wedding in Greenacres, Hedda Hopper and Louella Parsons both came. And for that one day they called a truce."

Survivors include a daughter, Susan, chairman of Harold Lloyd Entertainment.

Services will be private, although a public memorial is being planned, Beauchamp said... SOURCE
Posted by David Lobosco at 4:24 AM