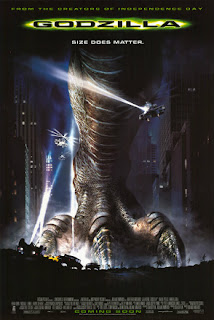 I have always loved the Godzilla franchise of movies. Many of them had silly storylines and the Godzilla costume looked as fake as could be. So, when Godzilla was getting the American treatment in 1998, I was excited and went to see the film on opening day. The movie did well financially, but it was critically panned. I watched the movie again this ast weekend when I was recovering from St. Patrick's Day festivities, and I must admit...I still like the film.

This 1998 movie is a loose remake of the 1954 giant monster classic Godzilla. The storyline was conceived from a screenplay written by Emmerich and Dean Devlin. The film relates a tale of a nuclear incident in the South Pacific which causes an abnormal mutation to occur in a reptile. The beast migrates to North America and wreaks havoc in Manhattan. Incorporated in the plot is the character of Dr. Niko Tatopoulos, played by actor Matthew Broderick. Tatopoulos, an American scientist whose work involves the effects of exposed nuclear radiation on species; is recruited by the military to help contain and subdue the creature referred to as "Godzilla". An ensemble cast featuring Maria Pitillo, Hank Azaria, Kevin Dunn, along with French actor Jean Reno, star in principal supporting roles.

The film was a co-production between the motion picture studios of Centropolis Entertainment and TriStar Pictures. It was commercially distributed by TriStar Pictures theatrically, and by Sony Pictures Entertainment for home media. Godzilla explores nuclear mutation, crisis management and military warfare. Following its wide release in theaters, the film won and was nominated for multiple mainstream awards, including Saturn Award nominations for Best Special Effects, Best Fantasy Film, and Best Director. The film also won the People's Choice Award in the category of Best European Director for Emmerich from the European Film Awards. On May 19, 1998, the Original Motion Picture Soundtrack was released by the Epic Records label. It features songs written by several recording artists including The Wallflowers, Rage Against the Machine, Silverchair, and the Foo Fighters. The film score was composed and orchestrated by musicians David Arnold and Nicholas Dodd. 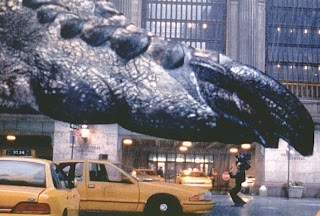 Godzilla premiered in theaters nationwide in the United States on May 20, 1998 grossing $136,314,294 in domestic ticket receipts. It earned an additional $242,700,000 in business through international release to top out at a combined $379,014,294 in gross revenue. The film was a strong financial success, taking into account its $130 million budget costs. However, preceding its initial screening in cinemas, the film was generally met with negative critical reviews.

Following a nuclear incident in French Polynesia, a lizard's nest is irradiated by the fallout of subsequent radiation. Decades later, a Japanese fishing vessel is suddenly attacked by an enormous sea creature in the South Pacific ocean; only one seaman survives. Traumatized, he is questioned by a mysterious Frenchman in a hospital regarding what he saw, to which he replies: "Gojira".

Dr. Niko Tatopoulos (Matthew Broderick), an NRC scientist, is on the Chernobyl exclusion zone in Ukraine researching the effects of radiation on wildlife, but is suddenly interrupted by the arrival of an official from the U.S. State Department. He is sent to Tahiti and Jamaica, escorted by the military, to observe the wreckage of the recovered Japanese fishing trawler with massive claw marks on it. The Frenchman is also present, observing the scene, and introduces himself as Philippe Roaché (Jean Reno), an insurance agent. Aboard a military aircraft, Nick identifies skin samples he discovered in the shipwreck as belonging to an unknown species. He dismisses the military's theory that the creature is a living dinosaur, instead deducing that it is a mutant created by nuclear testing. The large reptilian creature dubbed as "Godzilla" by the media, travels to New York City leaving a path of destruction in its wake. The city is evacuated as the military attempts to kill it but fails in an initial attempt. Dr. Tatopoulos later collects a blood sample and learns that Godzilla reproduces asexually and is collecting food for its offspring. 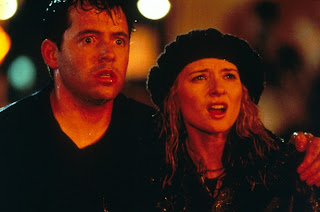 Aspiring journalist and ex-girlfriend of Dr. Tatopoulos, Audrey Timmonds (Maria Pitillo), uncovers a classified tape in his provisional military tent which concerns the origins of the lizard. Her superior Charles Caiman (Harry Shearer) however, declares the tape as his own media discovery. The tape is broadcast on television embarrassing the military on the sensitive nature of the situation. Dr. Tatopoulos is thrown off the team but is kidnapped by Roaché, who reveals himself to be an agent of the French Secret Service. He and his colleagues have been keeping close watch on the events and are planning to cover up their role in the nuclear accident that spawned the creature. Suspecting a nest somewhere in the city, they cooperate with Dr. Tatopoulos to trace and destroy it.

Following a chase with Godzilla, the creature dives into the Hudson River where it is attacked by a Navy submarine. After sustaining head-on collisions with torpedoes, the beast sinks after being rendered incapacitated. Believing it is finally dead, the authorities celebrate. Dr. Tatopoulos and Roaché's special operations team, covertly followed by Timmonds and her cameraman Victor "Animal" Palotti (Hank Azaria), make their way through underground subway tunnels to Madison Square Garden. There, they locate numerous eggs, having finally found the nest. 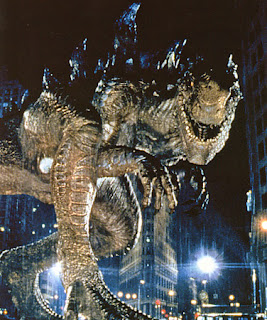 As they attempt to destroy them by planting explosives, the eggs suddenly hatch. Sensing the human intruders as food, they begin attacking them. Dr. Tatopoulos, Roaché, Timmonds and Palotti take refuge in the coliseum's broadcast booth and send a live news report to alert the military of what will happen if the lizards escape. A prompt response involving an airstrike is initiated as the four escape moments before the arena is bombed. Godzilla however, survived the torpedo attack earlier underwater and emerges from the venue's ruins. Discovering all of its offspring dead, it roars in anger and chases Dr. Tatopoulos, Roaché, Timmonds and Palotti through the streets of Manhattan. In pursuit of the quartet, Godzilla eventually makes its way to the Brooklyn Bridge. The creature helplessly becomes trapped in its steel suspension cables, making it an easy target. After being attacked by military aircraft, it falls to the ground and slowly dies. Meanwhile, amidst the Garden's ruins, a lone egg has survived the aerial bombardment and begins to hatch...