IS THERE A PLACE FOR SONG OF THE SOUTH 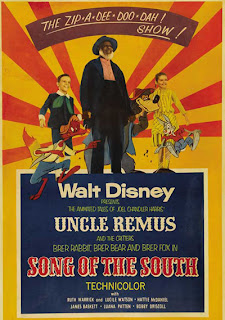 This is one of the best articles I have ever read on films. It was written by Gary Cahall. I wanted to share it with you as the film Song Of The South is still one of the hardest to find movies made...

Of the many motion pictures never made available on home video in the U.S, none has been a source of contention and controversy, with impassioned speakers on both sides and entire websites devoted to the film, as has Song of the South. The ongoing question of whether it should be released matches debates that met the film upon its 1946 debut, when picketers, newspaper editorials, and scholars criticized its depiction of African-American life, and upon subsequent theatrical re-showings from the mid-'50s to its final go-round in 1986.

Since some of you out there may be too young to have seen the film in theaters (I was in junior high when I caught it during its 1972 run) and thus may be familiar with it solely through its cartoon segments or the song "Zip-a-Dee-Doo-Dah," here's a brief synopsis. Shortly after the Civil War (no actual time frame is given), young Johnny (ill-fated child star Bobby Driscoll) is taken to live with his mother and grandmother on the older woman's Georgia plantation while Johnny's father returns to Atlanta. It's not really clear if Johnny's folks are actually separating, or if the father is merely finishing business regarding unspecified writings of his. A heartbroken Johnny intends to run away and follow his dad to Atlanta, but his journey is interrupted when he sees Uncle Remus (James Baskett), a jovial, elderly black man, telling stories to the plantation workers and their children. Uncle Remus finds Johnny sitting on a log and takes him back to his cabin, where he feeds him and tells him about a similar incident that happened to Brer (early African-American slang for "Brother") Rabbit, leading to the first of three animated Brer Rabbit tales in the film. Remus convinces Johnny to return home and takes him back to the mansion, but is scolded by the grandmother (Lucille Watson) for keeping the boy out so late. 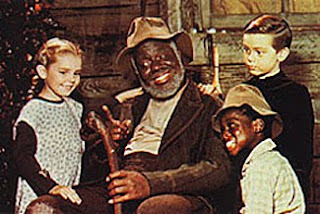 Johnny eventually comes to enjoy his time on the plantation, befriending a black boy named Toby (Glenn Leedy) and a "poor white" neighbor girl named Ginny (Disney live-action regular Luana Patten) whose brothers harass both her and Johnny. The three spend every spare moment at Uncle Remus' cabin, where he spins more fables about rascally Brer Rabbit's run-ins with scheming Brer Fox and the oafish Brer Bear, tales that help the youngsters deal with Ginny's bullying siblings. Meanwhile, Johnny's mom (Ruth Warrick) is not happy with her son's behavior, and--after one such visit keeps Johnny from attending a birthday party she arranged for him--she tells Remus to stop the storytelling sessions. A dejected Remus packs up and prepares to move away, until a life-threatening incident with a bull eventually brings Johnny''s father back home and leads to a happy reunion (and a final rendition of "Zip-a-Dee-Do-Dah") for Johnny, his parents and his new friends, including Uncle Remus.

Audiences and critics generally agreed that the animated sequences (about 25 minutes in all) and the soundtrack that included, along with "Zip-a-Dee-Do-Dah," "Uncle Remus Said" and "Everybody's Got a Laughing Place" were Song of the South's best features. And while most found the story a touch on the cloying side, the performances of Driscoll, Patten and, in particular, Baskett (who was presented with a honorary Academy Award "for his able and heart-warming characterization") were praised. What was not praised--and what Disney and his studio should have been better prepared for--was the film's portrayal of everyday life on an "Old Dixie" plantation. A 1946 NAACP statement decried "the impression it gives of an idyllic master-slave relationship which is a distortion of the facts," while the National Urban League described the film as "another repetition of the perpetuation of the stereotype casting of the Negro in the servant role." 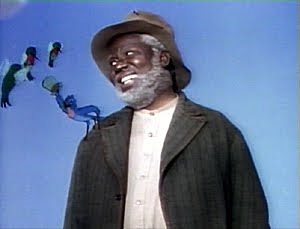 On the other side, a leading black newspaper, The Pittsburgh Courier, said that, even with its faults, the movie could in fact "prove of inestimable good in the furthering of interracial relations." The scenes of Johnny befriending Toby are, after all, fairly progressive for 1940s Hollywood; Our Gang and the East Side Kids were integrated, but everything there was played strictly for laughs (By the way, for a much more offensive family film set during the Civil War, check out the sole Our Gang feature, 1937's General Spanky, sometime). One gets the impression that the displeasure Johnny's mother feels over who he's with is as much about class (as with Ginny's family) as it is race. Moreover, Uncle Remus and another servant, Aunt Tempy (Oscar-winning Gone with the Wind alumna Hattie McDaniel), are shown to be sympathetic characters rather than the out-and-out caricatures that African-American actors were often relegated to at the time...although they're the only workers who get this treatment in Song of the South.

Had the film's makers put in some sort of explanation that its events took place after the Civil War and that Uncle Remus and his fellow workers were not slaves (a slave couldn't have decided to up and leave, as he does at one point), some of the negativity might--might--have been mitigated. Regardless of when in the 19th century Song of the South is set, however, the overall impression remains one of contented and subservient blacks whose lives revolve around working for and finding favor with their white bosses. Even the movie's title works against it; A name like "Tales of Uncle Remus" or "Uncle Remus and Brer Rabbit" would have emphasized the person behind the story, but "Song of the South" to this day conjures up demeaning and racist images and a yearning for those bygone days when minorities "knew their place," as in Gone with the Wind. 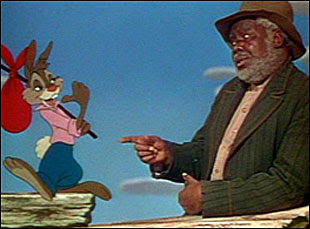 Ah, you might say, but Gone with the Wind has been out on home video since the mid '80s, from VHS to DVD to Blu-ray, and there's been little complaint about its portrayal of slavery. It's true, Gone with the Wind--and much worse movies like The Birth of a Nation--are available for purchase, but Song of the South's case is unique because it is a Disney picture and is intended for children and families. Shouldn't parents, you might then say, be allowed to decide for themselves if the film is appropriate for their kids to watch? That may also be true, but what sort of statement would Song of the South's release--even with an explanatory statement tacked on before the opening or a documentary examining the film's origins and setting--make to minority audiences?

As journalist Hollis Henry put it in a 2005 article for the Black Commentator website, "Imagine a film about an old Jewish storyteller, living contentedly in Nazi Germany. He develops a deep bond with the grandson of the owner of the munitions factory in which he works. The sun shines brightly as he strolls along singing, back to his home in the prescribed ghetto, Star of David sewn onto his coat. No mention is made of his people’s ordeal. In fact, there is no ordeal. Such a depiction would be repellant not only to Jewish people, but to most people." From the point of view of a white male who saw the movie as a pre-teen decades ago, however, while there seemed to me to be an underlying message of racial tolerance, even at that age I could recognize the inequality that was being glossed over on the screen. And I'm certainly not going to pretend that I can fully appreciate how black viewers, especially young people, might feel insulted about it. 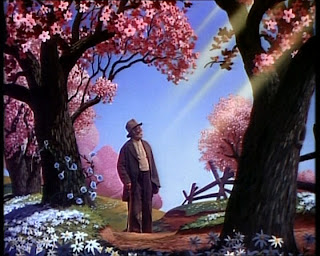 Song of the South was the fulfillment of a decade-long dream for Walt Disney to film the writings of Joel Chandler Harris, the illegitimate son of an Irish immigrant who abandoned the family shortly after Joel's birth in 1845. Apprenticed at a plantation, the outcast young Harris was fascinated by stories told in the slaves' quarters--tales linked to traditional African folklore that served as parables for coping with lives of oppression--and created the Uncle Remus character as a composite of several real people so that he could capture their experiences in book form (Uncle Remus has been compared to Ancient Greece's Aesop, who may or may not have been real, and may have also been a slave of African descent). There were good intentions all around, it seems, but looking at the movie's racially anachronistic tone with 21st-century eyes only draws attention to its many hurtful failings. For this reason, the folks at Disney seem to be resigned to leaving the film locked away in the vault.

Don't feel bad for the House of Mouse, though, if Song of the South never finds its way onto home video. The studio still makes money from the film's soundtrack, and Brer Rabbit and his animal cohorts are still seen in costume at the company's theme parks and as the (unofficial) mascots of the popular Splash Mountain ride. Oh, and James Baskett, the man who was in essence Song of the South's star and who would eventually be given an Oscar for his work on it? He couldn't attend the movie's screening or take part in any of the premiere festivities in the still-segregated city of Atlanta, because no hotel in the vicinity of the theater would give him a room. For Disney's Uncle Remus, there was no "Laughing Place" to be had in the real-life South.

SOURCE
Posted by David Lobosco at 4:26 AM