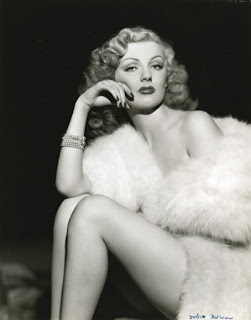 For every pin up like Betty Grable and Rita Hayworth during the wwar, there was a Dolores Moran. Dolores Moran had the beauty it took to becoming a big star, but she just never got the fame that her looks warranted.

Born in 1924, Moran's brief career as a film actress began in 1942 with some uncredited roles in such films as Yankee Doodle Dandy. By 1943 she had become a popular pin-up girl and appeared on the cover of such magazines as Yank. She was given supporting roles in films such as Old Acquaintance (1943) with Bette Davis and Warner Bros. attempted to increase interest in her, promoting her along with Lauren Bacall as a new screen personality when they co-starred with Humphrey Bogart in To Have and Have Not (1944). The film made a star of Bacall, but Moran languished and her subsequent films did little to further her career, this probably had something to do with Howard Hawk's decision to marginalise Moran in order to boost the screen presence of Bacall, excising some of Moran's scenes.

The Horn Blows at Midnight gave her a leading role with Jack Benny and Alexis Smith but her film appearances after this were sporadic, and she suffered ill health that reduced her ability to work. Her film career ended in 1954 with a featured role in the John Payne and Lizabeth Scott western film Silver Lode.

She was married to the film producer Benedict E. Bogeaus in Salome, Arizona, in 1946. Their son, Brett Benedict, born August 30, 1948, in Hollywood, later became a successful businessman. They divorced in 1962, and he died of a heart attack in 1968. Moran is said to have had an affair with director Howard Hawks while filming To Have and Have Not, which Hawks undertook mainly as revenge for his rejection by Bacall in favour of Bogart.

In 1982, Dolores Moran died of cancer. She was survived by her son, sister, and mother...
Posted by David Lobosco at 5:02 AM