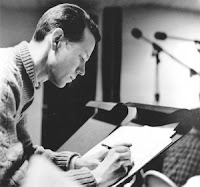 Hugh Martin, the songwriter who enlivened the Judy Garland movie musical "Meet Me in St. Louis" with an indelibly melodic trio of evergreen songs — "The Trolley Song," "The Boy Next Door" and "Have Yourself a Merry Little Christmas" — died March 11 in California, according to family members. He was 96.

A talented lyricist as well as a composer, Mr. Martin wrote the scores for several Broadway musicals, including Best Foot Forward (1941) (which featured the rousing fight song "Buckle Down, Winsocki"); Look, Ma, I'm Dancin' (1948), which was conceived and co-directed (with George Abbott) by Jerome Robbins; Make a Wish (1951); and High Spirits (1964); and did musical and vocal arrangements for the likes of Cole Porter, Irving Berlin and Richard Rodgers.

But it was for the lush M-G-M film "Meet Me in St. Louis," a collaboration with his frequent writing partner Ralph Blane, that he made his most lasting contribution on the American songbook. A sentimental tale of a close-knit St. Louis family at the turn of the 20th century, whose serenity is threatened by the father's plan to move to New York, the movie was made memorable through Judy Garland's ardent, warm delivery of the score. Her boisterous take on the bouncy, syncopated "The Trolley Song," sung while riding on a bustling trolley, became a piece of cinematic history. And the melancholy "Have Yourself a Merry Little Christmas" evolved into a yuletide classic, recorded by hundreds of artists over the years

The wistful expression of guarded holiday hopefulness is typically credited to both Mr. Martin and Blane. However, during a Dec. 21, 2006 interview on NPR, Mr. Martin said he wrote the song with no assistance from Blane.

In 1989, "Meet Me in St. Louis" was converted into a Broadway stage musical, for which Mr. Martin did the vocal arrangements and wrote a few new lyrics.

Mr. Martin and Garland became close friends after the movie. He later acted as her accompanist at many of her concert performances in the 1950s, including her famous comeback at the Palace Theatre. However, during the filming of "A Star Is Born," the two broke when an argument over her performance of "The Man Who Got Away" led him to walk off the production.

Mr. Martin and Blane, who were on contract at M-G-M, were twice nominated for Academy Awards, for "The Trolley Song" and for "Pass the Peace Pipe," a rousing number used in the college-set movie musical "Good News" starring June Allyson and Peter Lawford. Mr. Martin also received four Tony Award nominations, three for High Spirits (Best Musical, Best Book Author of a Musical, Best Composer and Lyricist), a musical take on Noel Coward's Blithe Spirit (and directed by Coward), and one for the Meet Me in St. Louis (Best Original Score).

Hugh Martin was born in Birmingham, AL, on Aug. 11, 1914. He began studying music at the age of five at the Birmingham Conservatory of Music. His original intention to be a classical musician was altered when he became enamored of the music of George Gershwin.

He moved to New York City in the mid 1930s. He made his Broadway debut in 1937, both performing and doing the musical arrangements for Hooray for What!, a show which also featured future collaborator Ralph Blane. Soon after, the men and two women formed a vocal quartet called The Martins. The Martins appeared on Fred Allen's popular radio show and also appeared in Irving Berlin's 1940 musical Louisiana Purchase, for which Martin and Blane were the vocal arrangers, as well as The Lady Comes Across in 1942.

In 1938, Richard Rodgers gave Mr. Martin a chance, hiring him to do vocal arrangements for The Boys From Syracuse. Thereafter, Mr. Martin bounced from show to show, doing vocal arrangements, choral arrangement, providing vocal direction, simply acting or doing a combination of the above, for such shows as Too Many Girls, Louisiana Purchase, Cabin in the Sky, The Lady Comes Across, Heaven on Earth, As the Girls Go, Gentlemen Prefer Blondes, Top Banana, Hazel Flagg, Lorelei and Sugar Babies, the 1979 hit revue for which he was musical director. 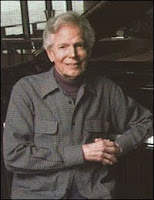 Mr. Martin was often candid in his assessment of his talents and achievements. In the liner notes for Look Ma, I'm Dancin', he told the story of his getting the job as composer. He auditioned "with three great numbers, 'Gotta Dance,' 'Tiny Room' and 'I'm the First Girl (in the Second Row).' They were received rapturously by everyone, even Robbins, and I reacted very stupidly. I got a false sense of security and instead of working hard, I relaxed a little. As a result, there are songs that are, well, OK, but not up to the standard of a George Abbott, Jerome Robbins, Nancy Walker musical. I wish I had tried harder."

Mr. Martin, a Seventh-day Adventist, spent much of the 1980s as an accompanist for gospel female vocalist Del Delker. In 2009, he published his memoir, "The Boy Next Door," in which he wrote frankly about his years battling speed and he conversion in the 1970s to a born again Christian.

Posted by David Lobosco at 1:15 PM