THE TRUTH ABOUT GEORGE FORMBY

His funeral was the largest in British history for a figure from showbusiness. As the cortege slowly made its way to his final resting place at Warrington cemetery, the streets were lined with more than 150,000 mourners united in grief at the loss of one of the country’s best-loved entertainers. It is 50 years ago this month since the death of George Formby, the Lancashire-born star who once captivated the nation with his unique brand of comedy and music. Today the appeal of Formby is elusive. With his toothy grin, gormless clowning, corny jokes and repetitive strumming on his ukulele, he can almost seem like a parody of a dated music hall turn, an unfunny relic from a bygone age.

Yet in the late 1930s he was by far Britain’s biggest celebrity, his films and records adored by millions of fans, whose number included the Royal Family. In his heyday, he was making more than £100,000 a year, this at a time when upper-middle professionals such as doctors were on salaries of little more than £1,000.

George Formby was not a man blessed with outstanding musical or thespian talent. Indeed, he could not even read music, while one of his movie co-stars, the actress Pat Kirkwood, described him as ‘cretinous’, adding that if you tried ‘to converse with him, you’d find there was no one at home’.

The secret of his attraction lay in the warmth of the cheeky, endearing character he exuded on stage and screen. Like the comedian Norman Wisdom in the 1950s, he played on the British love of the underdog: romantic but awkward with women and endlessly in scrapes with authority. Songs such as When I’m Cleaning Windows, Leaning On A Lamppost and With My Little Ukulele In My Hand were the big hits of the day.

But this image of easy-going, innocent charm was not translated into Formby’s personal life. Behind the buck-toothed smile and bouncing rhythms of the ukulele lay profound misery. 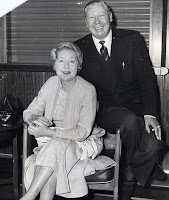 The truth was that, for almost 40 years, Formby was locked in an unhappy marriage to Beryl, who ruled him with a rod of iron. A tyrannical, domineering woman, Beryl was not just his spouse but also his manager. Through her vicious tongue, icy glares and savage willpower, she terrified George and much of the entertainment world as she drove him to the top.

Utterly ruthless in negotiations, she thought nothing of haranguing directors or the head of the BBC. At theatres, she stood in the wings with a clipboard and a stopwatch monitoring every detail of George’s performance and ensuring he did not get too close to any chorus girls. She also insisted on being on the set of all his films.

Yet Beryl was not without her passionate side. Her striking looks meant that she had a coterie of male admirers and, according to Formby’s diligent biographer David Bret, she had affairs with at least two actors in the 1930s.

The last years were the worst for their marriage. Beryl contracted cancer, and the mixture of alcohol and morphine that she took to numb the lethal pain sent her into deeper paroxysms of fury.

On some occasions, her drunken behaviour was so embarrassing that she was asked to leave the studio or theatre. But her deepening illness gave George a sense of impending liberation from her clutches.

He was said to have embarked on a rather incongruous affair with a singer called Yana, who liked to give herself an air of exoticism by posing as a Russian bisexual, though in fact she was born Pamela Guard in Romford and was married three times.

More serious was George’s relationship with schoolteacher Pat Howson, 20 years his junior. Within two months of Beryl dying of cancer, he announced his engagement to Pat, declaring that with his new fiancée he had achieved a happiness that had never existed with Beryl.

But just two days before his wedding to Pat, on March 6, 1961, he died of heart failure. He was only 56. Fate had prevented him from enjoying a relationship that amounted to more than just career success. 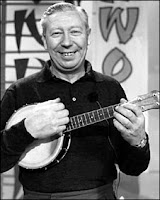 SOURCE
Posted by David Lobosco at 6:51 AM