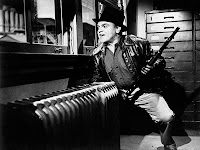 It is my humble opinion, which really means nothing in the academic world, I think that WHITE HEAT is one of the best movies ever made. It certainly is one of the greatest gangster films. WHITE HEAT, released in 1949, starred James Cagney, Virginia Mayo and Edmond O'Brien and featuring Margaret Wycherly, and Steve Cochran. Directed by Raoul Walsh from the Ivan Goff and Ben Roberts screenplay based on a story by Virginia Kellogg, it is considered one of the classic gangster films and was added to the National Film Registry in 2003.

Cody Jarrett (James Cagney) is the ruthless, deranged leader of a criminal gang. Although married to Verna (Virginia Mayo), Jarrett is overly attached to his equally crooked and determined mother, "Ma" Jarrett (Margaret Wycherly), his only real confidante. Cody suffers from debilitating headaches and his mother consoles him each time. Early in the film she sits him on her lap and gives him a shot of whiskey with the toast, "Top of the world." It is later revealed that Jarrett's father died in an insane asylum.

Jarrett and his gang rob a train, resulting in the deaths of four members of the train crew and a Jarrett accomplice, Zuckie (Ford Rainey). With the help of informants, the police close in and Jarrett shoots and injures US Treasury investigator Philip Evans (John Archer). Jarrett then confesses to a lesser crime, which was committed by an associate at the same time as the train robbery, thus providing Jarrett with an alibi. He is sentenced to one to three years.

Evans is not fooled. He plants undercover agent Hank Fallon (Edmond O'Brien) in Jarrett's cell; Fallon goes by the name Vic Pardo. His main task is to find the "Trader," a fence who launders stolen money for Jarrett.

On the outside, "Big Ed" Somers (Steve Cochran), Jarrett's ambitious right-hand man, has designs on both the leadership of Jarrett's gang and his treacherous wife Verna. He pays a convict, Roy Parker (Paul Guilfoyle), to kill Jarrett. In the prison workplace, Parker arranges to drop a heavy piece of machinery on Jarrett, but Pardo pushes him out of the way, saving his life. Ma visits and vows to take care of Big Ed herself, despite Jarrett's attempts to dissuade her. He begins to worry and decides to break out. Before he can, Jarrett learns that Ma is dead and goes berserk in the mess hall, being dragged away to the infirmary and diagnosed with psychosis.

Jarrett takes hostages and escapes, along with Pardo, their cellmates and Parker, who is locked in the trunk of the getaway car. Later, when Parker complains, "It's stuffy, I need some air," Jarrett replies, "Oh, stuffy, huh? I'll give ya a little air." He empties his gun into the trunk.

On hearing of Jarrett's escape, Big Ed nervously waits for him to show up. Verna tries to slip away, but she is caught by her husband. She convinces him that Big Ed murdered Ma (though it was really Verna who shot her in the back). Jarrett guns down Big Ed.

The gang welcomes the escapees, including Pardo, for whom Jarrett has developed a genuine liking. Jarrett insists on sharing the proceeds from their robberies with him, stating, "I split even with Ma, didn't I?"

A stranger shows up at the gang's isolated country hideout, asking to use the phone. Everybody expects the stranger to be murdered: "Looks like Big Ed's gonna have company." To Pardo's surprise, he is introduced by a trusting Jarrett to the Trader (Fred Clark), the fence he was to track down.

Jarrett intends to steal the payroll at a chemical plant in Long Beach, California by using a large gas truck as a Trojan Horse to hide inside. Pardo manages to get a message to Evans and an ambush is set up. The gang gets into the plant but the driver, Creel (Ian MacDonald), recognizes Pardo as Fallon.

The police surround the building and Evans calls on Jarrett to surrender. Jarrett decides to fight it out. When the police fire tear gas into the office, Fallon manages to escape. All of Jarrett's henchmen are shot by the police, or by Jarrett himself when they try to give themselves up (Verna is taken by the police). Jarrett then flees to the top of a gigantic, globe-shaped gas storage tank. When Fallon shoots Jarrett several times with a rifle, Jarrett starts firing into the tank and shouts, "Made it, Ma! Top of the world!" just before it goes up in a massive explosion.

The character of Cody Jarrett was based on New York murderer Francis Crowley, who engaged in a pitched battle with police in the spring of 1931 at the age of 19. Executed on January 21, 1932, his last words were: "Send my love to my mother." Another inspiration may have been Arthur Barker, a gangster of the 1930s, and a son of Ma Barker.

The train robbery which opens the film appears to have been closely based on the robbery of Southern Pacific's "Gold Special" by the D'Autremont brothers in 1923.

Jimmy Cagney should have won an Oscar for his role...