Watching BELLS ARE RINGING some fifty years after it was made makes me wish that Dean Martin did not waste his time with Jerry Lewis in the 1950s. I would have loved to have seen Dino making more all-out musicals. BELLS ARE RINGING unfortunately was made at a time when the movie musical was starting to fade, but it was an excellent film. Based on the successful 1956 Broadway production of the same name by Betty Comden, Adolph Green, and Jule Styne, the film focuses on Ella Peterson (Judy Holliday), who works in the basement office of Susanswerphone, a telephone answering service.

Ella Peterson works as a switchboard operator at the Susanswerphone answering service. She can't help breaking the rules by becoming overly involved in the lives of the subscribers. Some of the more peculiar ones include a dentist who composes songs on an air hose, an actor who emulates Marlon Brando, and a little boy for whom she pretends to be Santa Claus.

Ella has a secret crush on the voice of subscriber Jeffrey Moss (Dean Martin), a playwright for whom she plays a comforting "Mom" character. She finally meets him face to face, when she brings him a message under a false name (Melisande Scott) and romantic sparks and some confusion begin.

A humorous subplot involves the courtly Otto, who convinces Susanswerphone to take orders for his "mail-order classical record business". Unfortunately, Otto is actually a bookie whose orders are a system for betting on horses. Unwittingly, Ella changes some of the "orders" not realizing she is changing "bets".

Although the police begin to assume that Susanswerphone might be a front for an escort service, the plot ends happily, with Jeff proposing, and her wacky subscribers coming to thank her. 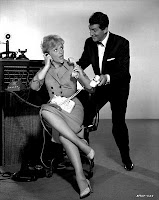 This movie was a pet project of Judy Holliday, since she originated the role on Broadway. During filming Holliday would already be suffering from cancer, and this would be her last movie. Dean Martin was great in the role of the playright, and he was never in better voice. Some of my favorite moments from the film is Dino crooning "Do It Yourself" or dueting with Holliday on the classic song "Just In Time".

Judy and Dean Martin interacted very little off the set. There wasn't a great deal animosity between them, it was just that they didn't have much in common. Judy would retire to her trailer between takes, passing the down time by playing Scrabble. Martin preferred to pass the time at a nearby golf course. The only possible source of contention between the two was that Martin, as he freely admitted, regarded his role as a waste of his time and talent. Martin had not appeared in the stage version and thus did not share Judy's level of commitment to the project. For him, this was just another film. Jeffrey Moss was the type of character Martin had played numerous times before. The lack of a challenge lead him to sleepwalk his way through the role. For Judy, it was a character and a property that she had devoted 3 years of her life to. Since Martin was just going through the motions, Judy feared that their on-screen relationship would suffer and as a result, the romance would across as more polite than passionate.

The lack of chemistry with Dean Martin, was nothing compared to her problems with director Vincente Minnelli. Four of Judy's seven previous films had been directed by George Cukor. Cukor's penchant for perfection meshed well with Judy's desire to do take after take, until both she and the director were satisfied. Minnelli's tendency was to yell "PRINT!" when he was satisfied. As the star of a vehicle that was written especially for her and as the owner of a role that she had put an indelible mark on, Judy correctly felt that her suggestions about what was funny or how something might be done better, should have had some merit. Minnelli's refusal to consider her opinions became a very sore subject with her. Surrounded by people that she felt were not giving her, or the project, the proper respect, she did something that was very unlike her, she attempted to quit the film. Feeling like just a cog trapped in the machinery, she decided it would be better to drop out, rather than see the character of Ella Peterson end on such an unsatisfactory note. 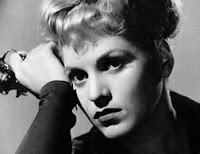 A few weeks into the filming, she asked Arthur Freed to replace her with another actress. She even offered to give back every penny she had been paid up to that point to help offset the cost of re-shooting her scenes. Freed, knowing that without Judy Holliday in the lead role, the picture would have no chance at the box-office, refused her request. For better or worse, they were all in it together. All parties involved soldiered on, making the best of a difficult situation. They were all, no doubt, counting down the days until the film wrapped production on December 24, 1959.

BELLS ARE RINGING premiered on June 20, 1960 at Radio City Music Hall and preceeded to break all of that venue's existing records, grossing more than $1 million during its 7-week run. Unfortunately, the "Bells" box-office phenomena was confined to the New York area whose residents adored the play and were interested to see how well it translated to film. The movie did not fare anywhere near as well across the rest of the country. Dino got the best reviews of the movie, and of course he would go on to star in many more films. This movie was a devastating blow for Judy Holliday, and she would never make another movie. Five years later Judy passed away...