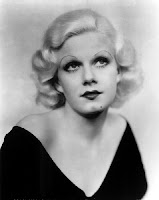 Probably the most iconic Jean Harlow moment comes at the end of the 1933 classic MGM comedy-drama "Dinner at Eight," when Kitty, Harlow's uber-sexy dumb blond wife of a self-made tycoon, is talking to Carlotta, a high-society woman played by Marie Dressler.

Kitty: "I was reading a book the other day."

Kitty: "Yes. It's all about civilization or something. A nutty kind of book. Do you know that the guy says that machinery is going to take the place of every profession?"

Carlotta: "Oh, my dear. That's something you need never worry about."

Harlow stole that picture from the likes of Dressler, Wallace Beery, John Barrymore, Lionel Barrymore and Billie Burke — and for the next four years, she was one of the biggest stars at MGM.

And even though she died at age 26 in 1937 of uremic poisoning because of kidney failure — a bout of scarlet fever as a teenager compromised her kidneys — Harlow remains one of the most influential stars of Hollywood's Golden Era.

She was the first blond bombshell, and without her success, there may not have been a Lana Turner, a Marilyn Monroe, a Jayne Mansfield or a Mamie Van Doren.

"And this is always key with me: She is a multidimensional bombshell. She is not wallpaper. She knew to give her characters layers. She gives them multidimensions."

"She definitely created the mold for that spectacular-looking blond who was sexy and humorous," says Darrell Rooney, who co-wrote (with Mark A. Vieira) "Harlow in Hollywood: The Blonde Bombshell in the Glamour Capital, 1928-1937," and supplied nearly all the evocative photographs and memorabilia in the new book. "She had a very winsome, childlike quality to her, a certain innocence that plays against the sexuality that is very unique and stops her from being one-note."

"I think of her and Carole Lombard, two gorgeous blonds who died way too young," says Beauchamp. "They were so good at what they did and brought such richness to their characters and also the intelligence beyond the eyes. There are times they are practically winking at the audience."

This year is the centenary for the platinum blond beauty who starred in such classic MGM comedies as 1932s "Red Dust" and "Red-Headed Woman" and 1936's "Libeled Lady." Never one to take herself too seriously on-screen, Harlow wasn't above poking fun at her image, as in 1933's Hollywood satire, "Bombshell." 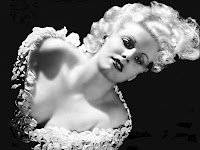 Besides their book, Rooney and Vieira have joined with the Hollywood Museum for the exhibition "Harlow in Hollywood," which opened Thursday, which would have been the actress' 100th birthday. The exhibition features photographs, memorabilia and even her 1932 Packard Phaeton. The two will be at the Egyptian Theatre on Sunday to discuss Harlow and "Bombshell." And throughout March, Turner Classic Movies will be showcasing her films.

By all accounts, Harlow was one of the best-loved stars in Hollywood. "Everybody called her 'Baby,'" says Beauchamp. "The crews just adored her. They were so protective of her. That heart of gold she played on the screen was very real in the person that was Jean Harlow."

"We all heard that Jayne Mansfield had a genius IQ, but even when Harlow was playing a 'dumb character,' like in 'China Seas,' you know she is not a stupid woman," says Vieira. "She had this native intelligence, that innate wisdom and understanding of people. My big discovery in writing this is that she used to bring books to the sound stage to read, like 'The Forsyte Saga.' She was an autodidact."

But her short life was filled with sadness and drama, including an overbearing stage mother, Jean, to whom Harlow was slavishly devoted; three failed marriages — including to MGM executive Paul Bern, who committed suicide in 1932, two months after their wedding; and a highly publicized romance with fellow MGM star William Powell, who broke her heart because he wouldn't marry her.

Harlow died before completing the romantic comedy "Saratoga" with her frequent leading man, Clark Gable. Though MGM studio chief Louis B. Mayer thought of scrapping all of Harlow's scenes and replacing her with another actress, her fans demanded to see her final film. Mary Dees, who was her stand-in, doubled in certain scenes shot from behind and wearing oversized hats. Actress Paula Winslowe supplied Harlow's voice.

Though the result is a mess — Harlow looks hollow-eyed and puffy — audiences turned out in droves when it opened in late July. "Saratoga" became one of the biggest box office hits of 1937.

SOURCE
Posted by David Lobosco at 7:01 AM