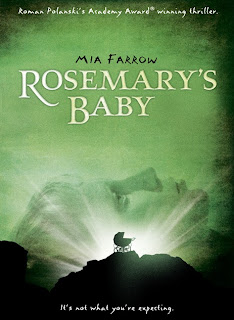 My friend, who is also a movie buff, lent me Rosemary's Baby (1968), and told me I had to see it. It's one of those classic movies I have never seen before. Since the movie is 45 years old now (yikes), I figured I better watch it. Around Halloween is the best time possible to see this odd and freaky horror movie. Rosemary's Baby is a 1968 American psychological horror film written and directed by Roman Polanski, based on the bestselling 1967 novel Rosemary's Baby by Ira Levin. The cast includes Mia Farrow, John Cassavetes, Ruth Gordon, Ralph Bellamy, Maurice Evans, Sidney Blackmer and Charles Grodin (in his first film appearance). It was produced by William Castle.

Rosemary Woodhouse (Mia Farrow), a bright but somewhat naive young housewife, and Guy (John Cassavetes), her husband and a struggling actor, move into the Bramford, an antiquated New York City apartment building. Their neighbors, Minnie (Ruth Gordon) and Roman Castevet (Sidney Blackmer), are an elderly and slightly eccentric couple who tend to be meddlesome but appear to be harmless.

Rosemary meets a young woman, Terry Gionoffrio ( Angela Dorian), who has been taken in and helped by the Castevets after living on the street. As Rosemary admires a pendant necklace the Castevets gave to Terry, she notices its strange smell. Returning home one night, Guy and Rosemary find that Terry has thrown herself to her death from the window of the Castevets' seventh-floor apartment.

Minnie invites the Woodhouses to dinner and they reluctantly accept. Guy forms a bond with the Castevets. Minnie gives Terry's pendant to Rosemary, telling her it is a good luck charm and the odd smell is from a plant called "tannis root". Later, Guy lands a role in a play when the actor who was originally cast suddenly and inexplicably goes blind. Guy suggests that he and Rosemary have the child they had planned.
On the night they plan to conceive, Minnie brings them individual cups of chocolate mousse. Rosemary finds hers has a chalky undertaste and surreptitiously throws it away after a few mouthfuls. Rosemary passes out and experiences what she perceives to be a strange dream in which she is raped by a demonic presence in front of Guy, the Castevets, and other Bramford tenants. When she wakes, she finds scratches on her body. Guy tells her that he had sex with her while she was unconscious because he did not want to pass up the moment for her to conceive.

Rosemary learns that she is pregnant and is due on June 28, 1966. She plans to receive obstetric care from Dr. Hill (Charles Grodin), who is recommended to her by her friend Elise (Emmaline Henry). However, the Castevets insist she see their good friend, Dr. Abraham Sapirstein (Ralph Bellamy), who says that Minnie will make Rosemary a daily drink which is more healthy than the usual vitamin pills. 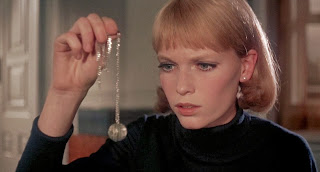 For the first three months of her pregnancy, Rosemary suffers severe abdominal pains, loses weight, becomes unusually pale, and craves raw meat and chicken liver. Dr. Sapirstein insists the pain will subside soon, and assures her she has nothing to worry about. When her old friend Hutch (Maurice Evans) sees Rosemary's gaunt appearance and hears that she is being fed the mysterious tannis root, he is disturbed enough to do some research. Before he can tell Rosemary his findings, he mysteriously falls into a coma. When Rosemary can't bear her abdominal pains another minute, they suddenly disappear.

Three months later, Hutch dies. He leaves Rosemary a book about witchcraft and it is delivered to her at his funeral along with the cryptic message: "The name is an anagram". Rosemary deduces that Roman Castevet is really Steven Marcato, the son of a former resident of the Bramford who was accused of being a Satanist. Rosemary suspects her neighbors and Dr. Sapirstein are part of a cult with sinister designs for her baby, and that Guy is cooperating with them in exchange for help in advancing his career.

Rosemary becomes increasingly disturbed and shares her fears and suspicions with Dr. Hill, who, assuming she is delusional, calls Dr. Sapirstein and Guy. They tell her that if she co-operates, neither she nor the baby will be harmed. The two men bring Rosemary home, where she briefly escapes them. Despite Rosemary locking them out, they enter the bedroom. Rosemary goes into labor and is sedated by Dr. Sapirstein. When she wakes, she is told the baby died. 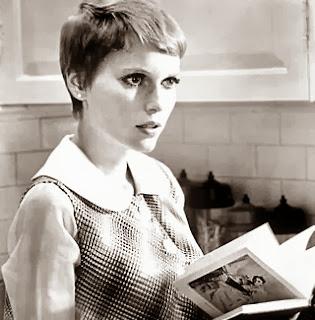 In the hall closet, Rosemary discovers a secret door leading into the Castevet apartment and hears a baby's cries revealing that her child is alive, she then finds a congregation gathered around her newborn son. After seeing the disturbing appearance of her baby's eyes, Rosemary is told that Guy is not the baby's father and that the baby, named Adrian, is actually the spawn of Satan. This horrifies Rosemary, who spits in Guy's face. Roman urges Rosemary to become a mother to her son and assures her that she does not have to join the cult if she doesn't want to. She adjusts her son's blankets and gently rocks his cradle with a small smile on her face.

I have never got Roman Polanski's movies. They were always so bizarre to me, and this file is no different. A few things I noticed about the movie is how beautiful Mia Farrow was in 1968. No wonder Frank Sinatra snagged her up. She was a pretty good actress in this film too. I loved all of the old stars that were in the film like Ralph Bellamy and in a small role comedian Patsy Kelly. I never thought I would see a movie with Patsy Kelly as a Satanist. 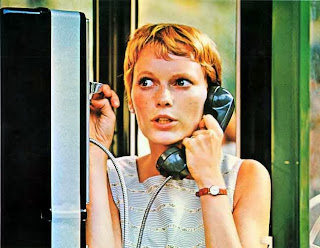 Polanski envisioned Rosemary as a robust, full-figured, girl-next-door type, and he wanted Tuesday Weld or his own wife Sharon Tate for the role. Since the book had not reached bestseller status yet, Evans was unsure the title alone would guarantee an audience for the film, and he felt a bigger name was needed for the lead. Mia Farrow came to light because of her high profile relationship with Sinatra. Despite her waif-like appearance (which would ultimately prove beneficial, as Rosemary became more frail as her pregnancy progressed), Polanski agreed to cast her. Her acceptance incensed Sinatra, who had demanded she forgo her career when they wed, and he served her divorce papers via a corporate lawyer in front of the cast and crew midway through filming. In an effort to salvage her relationship, Farrow asked Evans to release her from her contract, but he persuaded her to remain with the project after showing her an hour-long rough cut.

The acting was top notch in the movie, but I just do not care for the ending. I am glad I finally got to view this movie, and it is spooky for 1968. It is a shocking film to talk about sex, abortion, and nudity so openly back then, but at times the movie does seem dated, maybe even as more so than some movies 25 years older that Rosemary's Baby. Again, the acting is the best part of this 1968 horror film... 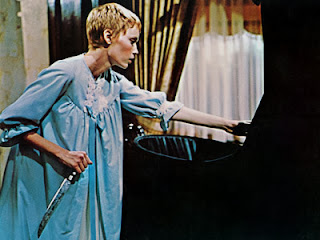