There is just something about Elaine Stritch that I always liked. Here is an article on her current status from the NY Times...
BIRMINGHAM, Mich. — Even at 88, and in what might be called spectacularly frail health, Elaine Stritch can still make a theatrical entrance.

Dinner is ready, in the condominium just next door to the one Ms. Stritch herself moved into last spring in this pristine Detroit suburb, near where she grew up and where much of her family resides.
The crab cakes have been baked, the corn on the cob boiled, the spinach steamed, the cocktails stirred. Still, no sign of Ms. Stritch.

The minutes tick by, with a small frisson of anxiety building. The dinner’s hosts, Kim and Henry Hagood, who have become Ms. Stritch’s friends since she moved next door, can’t seem to get a response, either to a phone call or a knock on the door. We all know she’s not been well lately.
Then, with little fanfare, there she is, a beaming smile on her face, a barking command to her caretaker on her lips. She is dressed with her usual, ahem, minimalism, in black tights, a Detroit Athletic Club T-shirt and not much else. Except for one new and unhappy accessory: a wheelchair.
Ms. Stritch would doubtless prefer a modest string of pearls, but the last several months have not been kind. Before making her dramatic entrance from New York — to theater lovers for whom Ms. Stritch is an ornery goddess, it was as if the Chrysler Building itself had picked up its skirts and skipped off to Detroit, of all preposterous places — Ms. Stritch took a bad fall one morning while leaving her longtime habitat, the Carlyle Hotel. Eye surgeries followed.
Not long after that, Ms. Stritch took a second tumble, breaking a hip. Recovery was under way, and Ms. Stritch was settling down in Birmingham when she leaned over to brush her teeth one night at the bathroom sink, somehow lost her balance, and hit the deck again, fracturing her pelvis. So for at least another month or six weeks, she won’t be up and about, although for someone used to striding about with a commanding gait in those tights and heels, she seems to be taking her tumble into infirmity with some measure of acceptance.
When asked what she’s been doing to keep herself occupied, the answer comes quickly: sleeping, often until 3 or 4 in the afternoon — late, even by the standards of showbiz folk. But she seems to relish this: “I’ve been preparing for this nap for a long time,” she says.
Black humor has always come naturally to Ms. Stritch, whose long career, on the New York and London stage, and, more recently, on the television series “30 Rock,” has made her a well-armored survivor. Asked how she has been adjusting to her new life away from the spotlight, Ms. Stritch says, “I don’t really know, I’ve been too busy falling down.
“It’s like a comedy,” she adds, “only a not so funny one.”
Shortly after arriving in Birmingham, Ms. Stritch gave an interview to the Vanity Fair Web site, in which she seemed grousy and regretful. Grousing has always come naturally to this scaldingly frank woman, but she’s never made much of a song and dance about woulda, coulda, shoulda.
“I’m thinking maybe I left a little early,” grumbled the woman once notorious for being the last to abandon any party. The gods apparently can’t take a joke, because for now, at least, even strolling next door is out of the picture for Ms. Stritch. And yet, perhaps because she’s been forced to settle down, her attitude toward her sudden bolt from the spotlight seems to be mellowing.
“One thing I’m proud of myself for doing is combating those feelings,” she says, when those professed second thoughts are mentioned. “I don’t want to be a sad sack who made a mistake. I gotta have a home, a base, a place where all my shoes are. I’m settled. When I first moved in here, I had good friends around me, but I kept thinking, ‘I can’t imagine being here alone.’ But then I was alone, and everything was fine. Now I’d kill to be alone,” she adds, referring to the full-time caretaking she now requires.

“I’ve come up against tougher things than this,” she adds. “I want to win at this decision.”
If that still doesn’t sound like a ringing affirmation of her happiness, so be it. Putting up a veneer of good cheer has never been Ms. Stritch’s stock in trade. Putting it all out there is much more her style, and in conversations over dinner and in her kitchen the following day, Ms. Stritch remains the same blunt, acerbic, unedited personality she always has been, even if the pain killers she takes sometimes find her beginning a story, only to lose its thread (“I guess I just won’t be giving you that jewel,” she says grimly), or asserting an opinion only to proffer another view a few minutes later... 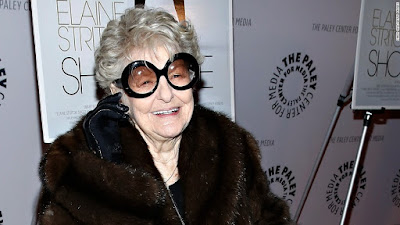 SOURCE
Posted by David Lobosco at 5:01 AM