BORN ON THIS DAY: ETHEL WATERS 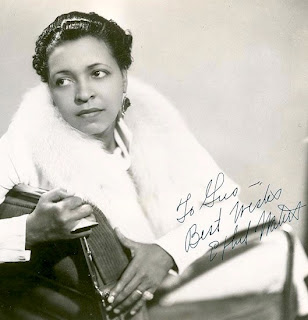 For this last day of October - and of course Halloween, I was hoping I would discover that Boris Karloff or Bela Lugosi was born on Halloween but no such luck. However, a wonderful singer by the name of Ethel Waters was born on this day in 1896. Ethel Waters was born in Chester, Pennsylvania, as a result of the rape of her teenaged mother, Louise Anderson (believed to have been thirteen years old at the time, although some sources indicate she may have been slightly older), by John Waters, a pianist and family acquaintance from a mixed-race middle-class background.Waters played no role in raising Ethel.

Ethel Waters was raised in poverty and never lived in the same place for more than 15 months. She said of her difficult childhood, "I never was a child. I never was cuddled, or liked, or understood by my family." Waters grew tall, standing 5'9½" in her teens. According to women-in-jazz historian and archivist Rosetta Reitz, Waters' birth in the North and her peripatetic life exposed her to many cultures. Waters married at the age of 13, but soon left her abusive husband and became a maid in a Philadelphia hotel working for $4.75 per week. On her 17th birthday, she attended a costume party at a nightclub on Juniper Street. She was persuaded to sing two songs, and impressed the audience so much that she was offered professional work at the Lincoln Theatre in Baltimore, MD.

She later recalled that she earned the rich sum of ten dollars a week, but her managers cheated her out of the tips her admirers threw on the stage. After her start in Baltimore, Waters toured on the black vaudeville circuit. As she described it later, "I used to work from nine until unconscious." Despite her early success, she fell on hard times and joined a carnival, traveling in freight cars along the carnival circuit and eventually reaching Chicago. Waters enjoyed her time with the carnival and recalled, "the roustabouts and the concessionaires were the kind of people I'd grown up with, rough, tough, full of larceny towards strangers, but sentimental and loyal to their friends and co-workers." 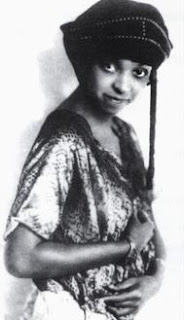 She did not last long with them, though, and soon headed south to Atlanta, where she worked in the same club with Bessie Smith. Smith demanded that Waters not compete in singing blues opposite her. Waters conceded and sang ballads and popular songs. Around 1919, Waters moved to Harlem and there became a celebrity performer in the Harlem Renaissance during the 1920s. Recording contracts and countless concerts followed. In 1921, Waters became the fifth black woman to make a record, on the tiny Cardinal Records label. Fame and stardom followed Ethel Waters now, and as we always say the rest is music history... 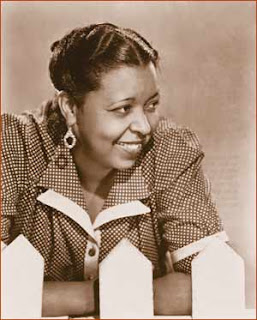 Posted by David Lobosco at 5:04 AM