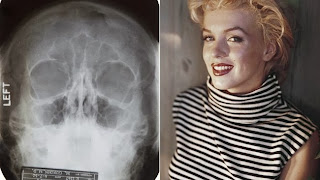 One of the most iconic actresses Hollywood has ever seen apparently had a little help in becoming a legendary beauty. A set of six X-rays and doctor's notes that indicate Marilyn Monroe underwent plastic surgery, including a chin implant, are to be sold next month. Hollywood surgeon Michael Gurdin wrote the notes, in which he observed that a chin implant Monroe had in 1950 had begun to dissolve. He later gave the items to an unnamed seller, who is putting them up for auction on Nov. 9 and 10, Reuters was the first to report.

The notes date back to the 1950s, in particular 1958, when Monroe began to complain about her chin and a possible deformity. See: Rare Photos of Marilyn Monroe Up for Auction The X-rays came years later, when Monroe saw Gurdin in 1962 after she suffered a fall. That visit happened two months before she died, on Aug. 5, 1962, at age 36. The X-rays, of Monroe's face, nose and the roof of her mouth, and notes are expected to get between $15,000 and $30,000, according to Julien's Auction in Beverly Hills, which will be selling the items.

Martin Nolan, executive director of Julien's, told ABC News that the numbers are just an estimate. Similar merchandise about Monroe sold for $45,000 a few years back. Nolan said his auction house deals with celebrity memorabilia all the time and it always does its due diligence to authenticate the merchandise. "Everything added up," he told ABC News. "The timeline, the dates, the names, the addresses. I can tell you the seller also had a close relationship to the doctor." Gurdin died in 1993. In fact, Nolan said the seller just had these items in storage and finally went through them recently. "They are a part of pop culture history," he said. "Worldwide, people have a love affair with Marilyn."

Posted by David Lobosco at 5:02 AM