RECENTLY VIEWED: WHAT EVER HAPPENED TO AUNT ALICE 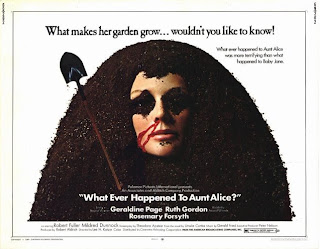 In my single days I used to go out pratically every Saturday night. Now that I am married with children, I am very happy to stay in on the weekend. However, some times I just can't sleep. On a recent Saturday I was flipping through the channels and came across a movie I had never heard of. I started watching the film and just could not stop until the end of the movie. That was movie was the cheaply made horror/thriller What Ever Happened To Aunt Alice.

What Ever Happened to Aunt Alice? is a 1969 American psychological-thriller film directed by Lee H. Katzin with Bernard Girard (uncredited), and starring Geraldine Page, Ruth Gordon, Rosemary Forsyth, Robert Fuller and Mildred Dunnock. The screenplay by Theodore Apstein, based on the novel The Forbidden Garden by Ursula Curtiss focuses on an aging Arizona widow who hires elderly female housekeepers and cons them out of their money before murdering them.

The opening scene of the film sets the tone. Claire Marrable (Page) is recently widowed and at the funeral, she frantically removes flowers from her husband's coffin, while eerie music plays in the background. A few days later, her husband's will is revealed by the junior partner of a law firm (The Bob Newhart Show's Peter Bonerz, in one of his first roles): her husband made bad investments and left nothing to her except a briefcase, a butterfly collection and a stamp collection. The home itself, and the furnishings in it, do not belong to Claire Marrable. Marrable goes ballistic, smashing the butterfly collection to smithereens and then tearfully frets about what lies in her future. At the lawyer's prodding, she remembers that she has a distant nephew in Arizona. 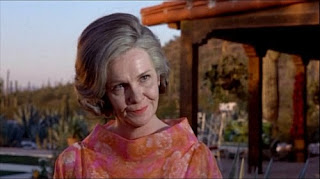 Forward a few months: Marrable is comfortably ensconced in a ranch home outside Tucson, Arizona. We had seen her murder what we later understand to be one of her housekeepers/companion. She has a penchant for successfully growing pine trees, even out in the hot desert. She lives with a housekeeper, Miss Tinsley (Dunnock). One evening, Miss Tinsley asks Marrable for an update on the stocks she has purchased through Marrable; this upsets Marrable, who threatens immediately to sell the stocks, even at a loss, to rid herself, and the housekeeper, of the anxiety. Upon arrival of a new pine tree from a nursery, Marrable demands that Miss Tinsley go out in the cool night to help her plant the tree. When the two women arrive at the recently dug hole for the tree, Marrable claims her watch has fallen in the hole and asks Miss Tinsley to jump in the hole to retrieve it. When the housekeeper searches for the watch, Marrable grabs a shovel and whacks the housekeeper over the head, then buries her in the hole, using the pine tree as a testament to her latest conquest. We then see five pine trees, in varying size in a long shot of the garden, each in different stages of growth, suggesting this process has been repeated.

Ruth Gordon as Alice Dimmock appears and wins the position of sixth companion, serving Mrs. Marrable well and to her employer's liking, but, in fact, Dimmock is investigating the disappearance of the last victim whom we learn had been Dimmock's own companion. After much intrigue and suspense, another murder is committed, atypical of the previous, plus two more attempted murders, until finally Mrs. Marrable's guilt is exposed, and the enormous value of the stamp collection left to her by her dead husband is inadvertently revealed. 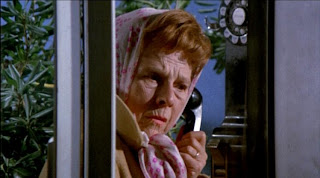 After making over $2 million dollars in ticket sales, the movie went out to suffer a loss. What I can not believe is it cost that much to make the film. The film is the third in a trilogy of Robert Aldrich-produced films (following What Ever Happened to Baby Jane? (1962) and Hush… Hush, Sweet Charlotte (1964) to feature two female leads. He directed the first two. Of the three films, this is the worst acted and the worst filmed. However, Geraldine Page and Ruth Gordon are actually excellent in the roles. All of the other actors around them seem wooden and stiff - almost going through the motions. There is also a fight scene with Page and Gordon, that is looks like they use mal stunt doubles with wigs on that is one of the worst filmed cat fights I have ever seen.

Despite this though, this cheapy looking 1969 film held my attention and was just plain old fun to watch. Although no Citizen Kane, What Ever Happened To Aunt Alice was an enjoyable romp. It was much more fullfilling and cheaper to spend my Saturday watching this flick than spending my money for a night on the town like I used to... 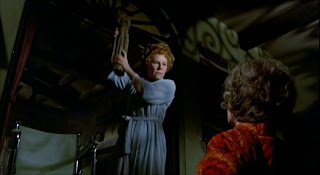