THE LAST DAYS OF FATTY ARBUCKLE

No one seems to remember the comedic genius of Fatty Arbuckle. The poor man was completely framed for the murder of Vriginia Rappe. After three trials Arbuckle was finally acquitted on April 12, 1922 but not until his reputation was destroyed and his movies were banned. In November 1923, Arbuckle's estranged wife Minta Durfee filed for divorce, charging grounds of desertion. In January 1924, the divorce was granted. They had been separated since 1921, though Durfee always claimed he was the nicest man in the world, and that they were still friends. After a brief reconciliation, Durfee again filed for divorce, this time from Paris, in December 1924. Arbuckle married Doris Deane on May 16, 1925.

Arbuckle tried returning to filmmaking, but industry resistance to distributing his pictures continued to linger after his acquittal. He retreated into alcoholism. In the words of his first wife, "Roscoe only seemed to find solace and comfort in a bottle".

Buster Keaton attempted to help Arbuckle by giving him work on his films. Arbuckle wrote the story for a Keaton short called Daydreams (1922). Arbuckle allegedly co-directed scenes in Keaton's Sherlock Jr. (1924), but it is unclear how much of this footage remained in the film's final cut. In 1925, Carter Dehaven made the short Character Studies. Arbuckle appeared alongside Buster Keaton, Harold Lloyd, Rudolph Valentino, Douglas Fairbanks, and Jackie Coogan.

During the middle and late 1920s and early 1930s, Arbuckle directed a number of comedy shorts under the pseudonym for Educational Pictures, which featured lesser-known comics of the day. Louise Brooks, who played the ingenue in Windy Riley Goes Hollywood (1931), told Kevin Brownlow:

"He made no attempt to direct this picture. He sat in his chair like a man dead. He had been very nice and sweetly dead ever since the scandal that ruined his career. But it was such an amazing thing for me to come in to make this broken-down picture, and to find my director was the great Roscoe Arbuckle. Oh, I thought he was magnificent in films. He was a wonderful dancer—a wonderful ballroom dancer, in his heyday. It was like floating in the arms of a huge doughnut—really delightful." 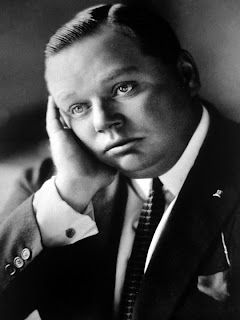 In 1932 Arbuckle signed a contract with Warner Bros. to star under his own name in a series of two-reel comedies, to be filmed at the Vitaphone studios in Brooklyn. These six shorts constitute the only recordings of his voice. Silent-film comedian Al St. John (Arbuckle's nephew) and actors Lionel Stander and Shemp Howard appeared with Arbuckle. The films were very successful in America, although when Warner Bros. attempted to release the first one (Hey, Pop!) in the United Kingdom, the British Board of Film Censors cited the 10-year-old scandal and refused to grant an exhibition certificate.

Roscoe Arbuckle had finished filming the last of the two-reelers on June 28, 1933. The next day he was signed by Warner Bros. to make a feature-length film. He reportedly said, "This is the best day of my life." He suffered a heart attack later that night and died in his sleep. He was 46. His body was cremated and his ashes scattered in the Pacific Ocean. The unhappy and tortured clown could finally rest at last...

Posted by David Lobosco at 5:09 AM