HELLY DOLLY AND THE DEATH OF THE MOVIE MUSICAL 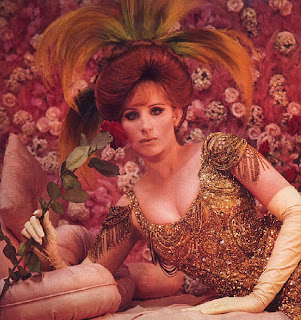 The age of the movie musical died when rock n roll took hold of the young people in the late 1950s. Hollywood was the last one to admit its death, and studios kept on making big budgeted and overblown musicals. For the most part, Hollywood in the 1960s and 1970s got their ideas for musicals from broadway. Broadway still produced the musicals of high quality that used to be the speciality for the movie musicals. When the musical "Hello Dolly" debuted on broadway in 1964, it was only a matter of time before this blockbuster show was given the Hollywood treatment. Unfortunately, the Hello Dolly that was made on film was not the Hello Dolly on broadway. It was expensive, unsuccessful, and cost 20th Century Fox a lot of money that they did not have.

The film grew out of a massive attempt by 20th Century Fox to duplicate its earlier, unprecedented success with The Sound of Music by producing three expensive, large-scale musicals over a period of three years, Doctor Dolittle and Star! being the others. Unfortunately, film attendance as a whole was down and all three films' box-office performance reflected this. All were released amid massive pre-release publicity and all lost equally massive amounts of money for the studio (though "Dolly" was in the box office top 5 for the year of its release). The result was that several top studio executives lost their jobs, and the studio itself went into such dire financial straits that it only produced one picture for the entire calendar year of 1970. In truth, Fox would never recoup its losses until a highly successful theatrical reissue of "The Sound of Music" in early 1973.

The key problem that many people express with “Hello, Dolly!” was the unlikely casting of Barbra Streisand in the eponymous role of the 1890s matchmaker Dolly Levi. The role, of course, was conceived for a late-middle-aged woman – Carol Channing famously originated the part on Broadway, while Mary Martin starred in the West End premiere. A skein of old-time movie queens played the role in the post-Channing Broadway run and in various touring companies, including Ginger Rogers, Martha Raye, Betty Grable, and Dorothy Lamour. Offbeat casting included Pearl Bailey in an all-black Broadway version plus comic actresses Phyllis Diller, Dora Bryan and Molly Picon in other stage versions. 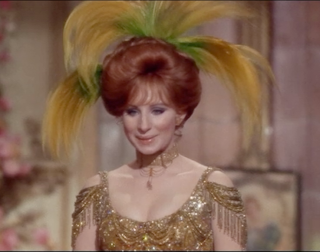 Streisand, however, was 27 when Ernest Lehman signed her for the film version. Lehman would later state he initially considered Channing for the film, but he was concerned about her spotty track record as a film performer. After viewing Channing’s performance in the 1967 film “Thoroughly Modern Millie,” he felt that the star’s stage-bound vivacity could not translate into a motion picture. Ironically, Streisand had even less film experience than Channing – her one film at that point was the adaptation of her Broadway hit “Funny Girl,” but that was still in post-production when she was signed to play Dolly Levi.

For her part, Streisand was surprised at the offer – oddly, she thought the role would be best suited for Elizabeth Taylor, even though the two-time Oscar-winner was years removed from late middle age and possessed no musical abilities (a fact that was cruelly confirmed a decade later with the film of “A Little Night Music”). 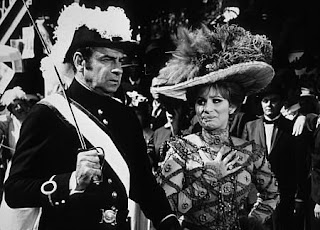 Streisand reportedly did not get along with her co-star Walter Matthau, who was cast as the curmudgeonly “half-a-millionaire” Horace Vandergelder that Dolly recklessly pursues. Whatever friction took place off-screen may have helped fuel their respective performances. A critical eye can dissect their joint scenes and witness how they try to upstage each other – a Matthau grimace is met with a Streisand eye roll, met in turn by a Matthau scowl, and so forth. Not surprisingly, the film shows slight signs of lethargy whenever either star is not present. During filming, Barbra Streisand and Walter Matthau fought bitterly. He disliked her so intensely that he refused to be around her except when required to do so by the script. He is famously quoted as telling Barbra that she "had no more talent than a butterfly's fart".

“Hello, Dolly!” came at the tail end of an era where studios spared no expense in putting on an extravaganza. In this pre-CGI era, the recreation of 1890s New York was achieved by actually recreating the city’s downtown skyline. The song “Before the Parade Passes By,” takes the metaphoric link between fading opportunities and an expiring march, and visualizes it with a magnificent display of colorful floats and period-clad marchers and spectators. The film was shot in the wide screen 65mm Todd-AO format, and much of its original visual pizzazz is lost when viewed in today’s letterboxed DVD screen. The director, Gene Kelly was a tremendous dancer and choreographer as everyone knows, but his directing style is seemingly overblown and a little bit too elaborate for 1969 audiences. 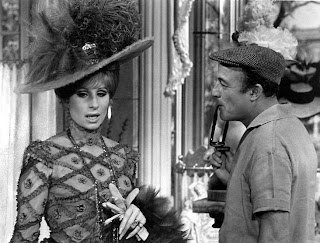 What we also forget is that while today’s film scholars would peg “Bonnie and Clyde” or “Easy Rider” as symbolizing their era, the audiences of four decades ago actually sought out the traditional productions – the so-called groundbreaking efforts could be counted on fingers, and the top grossing U.S. film of 1969 was not “Easy Rider,” but was Disney’s non-cutting edge romp “The Love Bug.”

Indeed, detractors love to insist out that “Hello, Dolly!” was not a commercial success at the time of its release. Indeed, it only earned back $18 million of its $24 million budget (quite a princely sum for 1969). What is not mentioned, however, is that when the film was in wide release during 1970, it was among the year’s top ten grossing films; it later recouped its costs through international theatrical, television and home video sales. 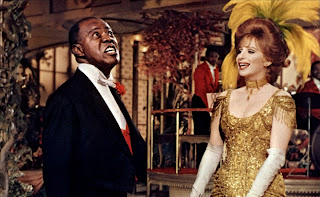 There were some good moments in "Hello, Dolly!" though. Louis Armstrong, who had the biggest hit of the title song, joined Streisand for the performance of the title song. He was only on the screen for a few minutes, and he did it all in one take, but it was the best part of the film. Streisand's voice is very vibrant and appealing, which makes up for a twentysomething actress playing the older matchmaker Dolly Levi. The film did not hurt Streisand's career, but it did hurt 20th Century Fox, the directing career of Gene Kelly, and movie musicals as a whole. With "Hello, Dolly" a big upcoming young star and an overblown lavish budget did not spell box office success...
Posted by David Lobosco at 4:37 AM