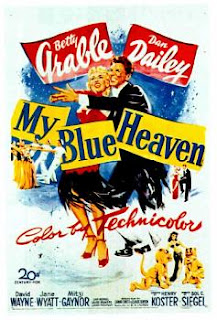 During World War II, Betty Grable was the top box office leading lady. She herself said she was not very talented, but she had that star quality that the public adored. By the late 1940s, her films were not as popular as they had been. However, one of my favorite Betty Grable musicals from the later era was MY BLUE HEAVEN (1950).

MY BLUE HEAVEN starred Dan Dailey and Betty Grable as a happy show business couple who started in vaudeville and now are going into that happy new medium television. This was one of the first films that dealt with the phenomenon of television. It also was the third film that Grable and Dailey made together.

Dailey and Grable are a happy couple, but they'd even be happier with a child, in fact Betty loses a baby almost at the beginning of the film. Friends and sponsors, David Wayne and Jane Wyatt suggest adopting because three of their six are adopted. The rest of the film is a lighter treatment of the themes from A Penny Serenade. Things go a lot happier for Dailey and Grable than they did for Cary Grant and Irene Dunne.

Because they are a musical performing couple Grable and Dailey get a whole lot of numbers and there's even a few tossed in for Mitzi Gaynor who was doing her second film. What a pity she came along as late as she did, she would have been a Grade A star in the Thirties. Gaynor plays an eager young understudy who'd just as soon Grable stay out on maternity leave. 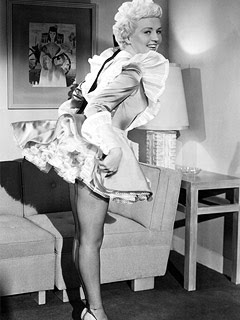 This is not the typical "Betty Grable Extravaganza" that she may have starred in 10 years prior. Instead it is comedy/soap opera/musical chronicling Grable and Dailey's struggle to become parents. Grable has matured here and this film highlights a more confident Grable on all fronts. This might have been a great melodrama/musical. What actually wieghs down the proceedings are the musical numbers attached to their "televsion appearances". While these numbers are by and large terrific, the songs border on "poverty row" quality. Take a listen to "It's Deductible" and you'll see what I mean. 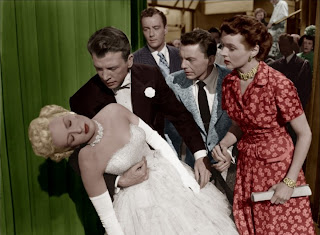 Thankfully Grable and Dailey make the best of the songs given to them to sing and they make it all seem much more fabulous than it would have been in less capable hands. The constant melodrama of "couple loses baby, gets baby, loses baby" gets tiresome and the inherent sexism does not hold up well today (i.e. Grable's response to her husband's indiscretion with Mitzi Gaynor). Aside from these detractors, "My Blue Heaven" boasts a delightful supporting cast including Mitzi Gaynor, Jane Wyatt and the wonderful Una Merkel.

The film is now out on DVD, but like many musicals of that era, it is not well remembered today. It should be for Betty Grable's performance alone...