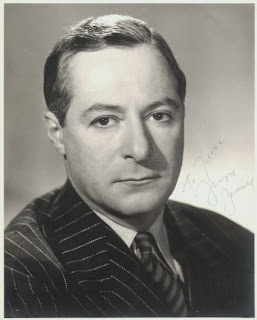 George Jessel. The name is buring among the ruins of 1920s vaudville, and many people will not even remember what George Jessel was famous for. Jessel, along with Al Jolson and Eddie Cantor, made up a trio of vaudville and broadway stars that not only made up a part of entertainment in those early years, but they were entertainment.

George Jessel, born on April 3, 1898 was an American illustrated song "model," actor, singer, songwriter, and Academy Award-winning movie producer. He was famous in his lifetime as a multitalented comedic entertainer, achieving a level of recognition that transcended his limited roles in movies. He was widely known by his nickname, the "Toastmaster General of the United States" for his frequent role as the master of ceremonies at political and entertainment gatherings.

His most famous comedy skit was called "Hello Mama" or "Phone Call from Mama", which portrayed a one-sided telephone conversation. In 1919 he produced his own solo show, "George Jessel's Troubles" and appeared in his first motion picture, the silent movie The Other Man's Wife. He co-wrote the lyrics for a hit tune, "Oh How I Laugh When I Think How I Cried About You", and performed in several successful comedy stage shows in the early 1920s. In 1921 he recorded a hit single, "The Toastmaster". He sometimes appeared in blackface in his vaudeville shows. 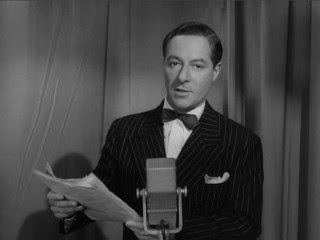 In 1925, he emerged as one of the most popular leading men on Broadway with the starring role in the stage production of The Jazz Singer. The success of the show prompted Warner Bros. -- after their success with Don Juan (1926) with music and sound effects only—to adapt the The Jazz Singer as the first "talkie" with dialogue and to cast Jessel in the lead role. However, when the studio refused his salary demands, Jessel turned down the movie role, which was eventually played by Al Jolson. According to Jessel during an interview around 1980, Warners still owed Jessel money for earlier roles and lacked enough funds to produce this movie with a leading star. Jolson, the biographical inspiration for the movie, became the movie's main financial backer.

His next movie role was in 1926 in Private Izzy Murphy. Whereas Jolson's film career skyrocketed after the 1927 release of The Jazz Singer, Jessel remained in smaller movie roles, often intended for audiences fond of Jewish and other "ethnic" humor.

In the middle 1940s, he began producing musicals for 20th Century Fox, producing 24 films in all in a career that lasted through the 1950s and 1960s. At the same time he became known as a host on the banquet circuit, famous for his good-natured wit aimed at his fellow celebrities. In 1946, he was one of the founding members of the California branch of the Friars Club. (A recording exists of an example of his "blue" work in front of a stag audience, although it was actually recorded at a roast hosted by the Friars' rival, the Masquers Club.) He also traveled widely overseas with the USO entertaining troops. As he grew older, he wrote eulogies for many of his contemporaries in Hollywood. He wrote three volumes of memoirs, So Help Me (1943), This Way, Miss (1955), and The World I Lived In (1975).

In the early 1950s he performed on the radio in The George Jessel Show, which became a television show of the same name from 1953 to 1954.

Jessel was the emcee on the short-lived The Comeback Story, a 1954 reality show on ABC in which mostly celebrities shared stories of having overcome adversities in their personal lives. He was replaced as emcee by Arlene Francis, but the program soon folded.

Thereafter, Jessel guest starred on NBC's The Jimmy Durante Show. In 1968 he starred in Here Come The Stars, a syndicated variety show. Jessel also appeared as himself in Valley of the Dolls in 1968. His attempt to extend his career was undermined, however, by a perception that his style of comedy was outdated, as well as by his outspoken support of the American entry into the Vietnam War and of conservative political causes.

On the other hand, he often crossed the era's stereotypical political lines with his support for the Civil Rights movement and criticism of racism and anti-Semitism.[citation needed] His outspokenness regarding his political opinions could sometimes get him into trouble. In 1971, while being interviewed by Edwin Newman on The Today Show on NBC, he repeatedly referred to The New York Times as "Pravda", the house organ of the Communist Party in the Soviet Union, and was ejected from the show. 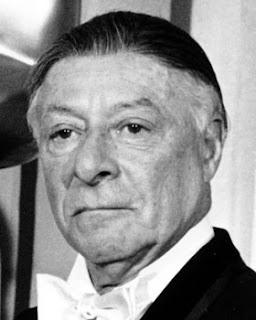 Famous in his youth for his affairs with starlets, he also became known for keeping company with a wide assortment of younger show girls, even into his old age. By the late 1960s he had gained a reputation as being overly self-indulgent in reminiscing about former companions who were little known by younger audiences. Walter Winchell once said of him, "That son of a bitch started to reminisce when he was eight years old." In response, Jessel stated that "I have a funeral speech ready for Winchell. I hope it starts in fifteen minutes." He had achieved a somewhat iconic status, representing a Hollywood of yore, such that he extended his career by playing himself, rather than characters, as in the camp movie version of Valley of the Dolls (1968).

His last movie role was in Diary of a Young Comic in 1979. He also appeared as himself as an interviewed witness in the 1981 movie Reds. He entertained American military forces in Europe in 1972.

Jessel died of a heart attack on May 23, 1981 at the age of 83 in Los Angeles and was interred in the Hillside Memorial Park Cemetery in Culver City, California...