THE SON OF SPENCER TRACY 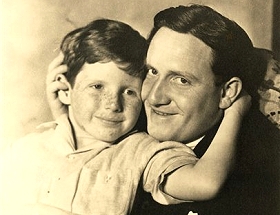 It is always interesting to look into the offspring of some of our favorite stars. Some of them - well a lot of them do not deal with having a famous parent very good. The lives of Hollywood children are filled with drugs, heartache, and often suicide. However, there are some children that seemingly live normal lives. The son of Spencer Tracy was born with huge physical obstacles - however, John Tracy seemingly overcame many of them to have a wonderful life. His story is an inspiration to not only other Hollywood offspring but to anyone fighting a physical handicap in general.

When actor Spencer Tracy and his wife Louise had a boy on June 26,1924 - John Broeck Tracy, Louise noticed he wasn't responding to their voices. When Tracy was 10 months old, his mother became alarmed when a door that accidentally slammed shut failed to wake him.

"I stopped suddenly.... I stood motionless beside his crib. I called his name again -- and then I shouted it. He slept on. And so I discovered our baby was deaf," she said years later. Afraid to tell anyone, even her husband, she consulted several doctors who told her that her son had "nerve damage, cause unknown." They also said he would never talk. The Tracys refused to accept doctors' advice to "wait -- in a few years he'll be old enough for a state school," a reference to deaf education that would start when he was 6.

"We went right on talking to Johnny, singing to him, telling him nursery rhymes, and as it turned out, that was just the right thing to do," Louise once said, according to a 1983 Times story. 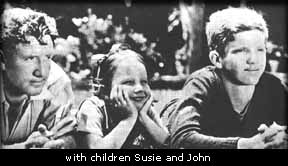 A specialist in New York told them John could live a “normal” life if he learned to lip read and talk. As Louise worked with her son, she realized other parents need help too with their deaf child[ren]. She started a daycare in 1942, next to the University of Southern California. The business incorporated into the John Tracy Clinic (JTC) the next year with Walt Disney as one of the first board members alongside Spencer. Over the years it grew, developing a correspondence course as well to reach those who couldn't travel to them. In 1952 the clinic moved to more modern facilities. The clinic highly promotes oralism. JTC now servers over 25,000 families a year, focusing on those aged 0-5 years.
"As a child, John Tracy couldn't have known that he would be the inspiration of a whole movement to give new hope to parents of children with hearing loss," Barbara F. Hecht, president of the clinic, told The Times.

The clinic was among the first to start a hearing-impaired child's training in infancy and make parental education a critical component. It has helped an estimated 245,000 parents and children.

It tries to educate "deaf children through their mothers and fathers, who otherwise would not know what to do with them.... I hoped it would help a great deal," John Tracy wrote in 1946 in the Volta Review, the journal of the Alexander Graham Bell Assn. for the Deaf and Hard of Hearing.

Despite a bout with polio at 6 that left him with a weakened leg, Tracy began riding horses at 9 and competed in Riviera Country Club riding contests, he wrote in Volta. He also became a dedicated polo and tennis player.

With his father's acting career taking off, the family put down roots in 1936 on an eight-acre ranch in Encino, where they lived for 19 years. 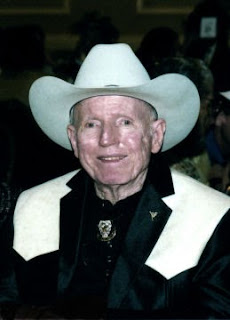 After attending what is now the California Institute of the Arts, Tracy worked for several years in the art props department at Walt Disney Studios; Disney was a close family friend. Tracy stopped working when his eyesight started to fail in the late 1950s. Well into adulthood, he learned that his deafness was due to Usher syndrome, a genetic disease that was also to blame for his fading vision. By the early 1990s, he was legally blind from retinitis pigmentosa.

In 1953, he married Nadine Carr, a neighbor with whom he used to ride horses. They had a son, Joseph Spencer Tracy, before divorcing in 1957. A year before his mother died in 1983, Tracy moved to a Santa Monica retirement home, then later to Acton. His father died in 1967.

When asked whether he had a message for the hearing-impaired children who attend the clinic that bears his name, Tracy told the Daily News in 2003 that "I want to let the kids know they can live a full life. Sports, schools, hobbies, interests, dating, marriage, have a family, drive a car -- all of it."

John Tracy led a fullfilling life even though in the 1920s and 1930s being born with deafness was nearly a prison sentence, never being able to communicate with society. However, John and his parents changed that all. John died on June 15, 2007 - nearly 40 years to the day after his father Spencer Tracy died. In addition to his sister, Susie, and his son, Joseph, who is an artist, Tracy was survived by three grandchildren. He was not only survived by his family , but he was survived by the countless people and their families that he inspired through the years... 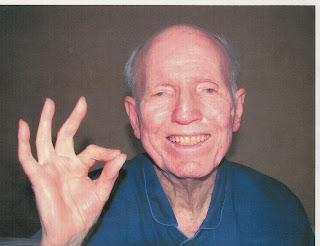