WHAT A CHARACTER: EDWARD ANDREWS 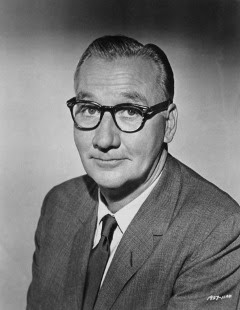 I was watching an odd episode of the Boris Karloff hosted television show "Thriller", and I saw an actor I had seen in countless films and televisions shows. I did not even know his name, but I would soon find it out! Edward Andrews was one of the most recognizable character actors on television and films between the 1950s and the 1980s. His stark white hair, imposing build and horn-rimmed glasses added to the type of roles he received, as he was often cast as an ornery boss, a cagey businessman, or a strict disciplinarian of some type.

He was born on October 8, 1914 in Griffin, Georgia, the son of an Episcopal minister, and grew up in Pittsburgh, Pennsylvania, Cleveland, Ohio, and Wheeling, West Virginia. As a child, he attended Pittsburgh's Nixon Theatre and would nab a balcony seat so as to catch a good view of the 'headliners'. At the age of twelve, he did a walk-on in a stock theatre production which featured James Gleason and he was 'hooked' on an acting career.

He attended the University of Virginia, and at age 21, made his stage debut in 1935, progressing to Broadway the same year. During this period, Andrews starred in the short-lived but very well received military drama "So Proudly We Hail" in the lead role opposite Richard Cromwell. In 1936, Andrews debuted in the film Rushin' Art. However, it was not until 1955 that he appeared in his second film. He was cast as the subversive and corrupt character of Rhett Tanner, head of a knock-them-off political machine, in The Phenix City Story.

While Andrews' film acting career began in earnest in his forties, he was consistently typecast as a grandfatherly type, and thus he is most strongly associated with these roles in later films. Among his roles are those that are soft and friendly though Andrews was equally adept at portraying sleazy businessman types or sinister bureaucrats and officials.

Well-known films in which Andrews acted include Send Me No Flowers, with Doris Day and Rock Hudson, Advise and Consent, The Young Savages, Elmer Gantry, in which he was memorable as George F. Babbitt, The Absent-Minded Professor and Son of Flubber, in both of which he played the Defense Secretary, and Avanti!, in which he was a very convincing agent of the State Department. Among his other film credits are: Summertime (1955) with Katharine Hepburn; Tension at Table Rock (1956); The Harder They Fall (1956) with Humphrey Bogart; Tea and Sympathy (1956); Three Brave Men (1957); The Young Doctors (1961); Youngblood Hawke (1964); Good Neighbor Sam (1964); The Glass Bottom Boat (1966); The Trouble with Girls with Elvis Presley (1969); Tora! Tora! Tora! (1970) as Admiral Harold R. Stark; How to Frame a Figg (1971); Charley and the Angel (1973); and The Seniors (1978). In 1984, he played the character of Howard Baker in John Hughes' Sixteen Candles. He also appeared in Gremlins, filmed later the same year, which would be his final film. 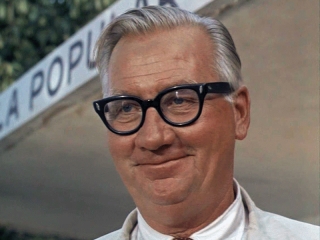 Andrews was a regular on the ABC series, Broadside (1964–1965) as Commander Rogers Adrian. Kathleen Nolan held the lead role. Andrews played the character of Charley in the 1966 dramatization of Death of a Salesman, and constantly acted throughout the 1970s as Elton Dykstra on The Intruders, Ernest W. Stanley on The Man Who Came to Dinner, Mayor Chrisholm alongside Don Knotts in the 1971 film How to Frame a Figg, and Mayor Massey on The Whiz Kid and the Mystery at Riverton. In 1968, he played a safecracker in a 4-part episode of I Dream of Jeannie and later, in early 1969, he was a drug-dealing mortician on Mod Squad. He played Conductor Harry Flood on the short-lived series Supertrain. He was cast as Jack Tripper (John Ritter)'s grandfather in an episode of ABC's Three's Company. It would be his last appearance.

On March 8, 1985, Andrews died suddenly of a heart attack in Santa Monica, California, at the age of 70 and was cremated; his ashes were scattered at sea. Every role Edward Andrews was in was worth seeing, no matter what the movie or what the television show. That is a sign of an expert character actor... 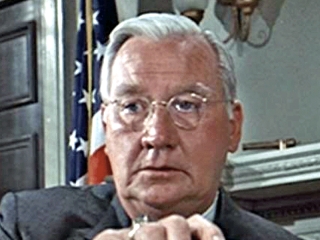