Sid Caesar, at once one of the greatest improvisors and one of the most rigorous sketch-comedy artists in television history, has died at the age of 91. His friend Larry King revealed Caesar’s passing Wednesday on Twitter.

Caesar was a modest dynamo, a man who disappeared into his comedy as though it was his escape from reality. A New York-born nightclub performer, he helped to usher in the dawn of the TV revolution. His 90-minute Saturday night variety program, Your Show of Shows, premiered in 1950. The live broadcast became a hit that lasted four years and immediately morphed into Caesar’s Hour, from 1954 to 1957.

The legendary writing staff of Your Show of Shows included Woody Allen, Neil Simon, Mel Brooks, and Larry Gelbart (the latter would go on to adapt M*A*S*H for TV). They wrote sketches that played off Caesar’s tall, broad-shouldered physique, casting him as everyone from Tarzan to blustering military types. (Brooks’ famous description of Caesar: “He could punch a Buick in the grille and kill it.”)

Caesar could rattle off dense thickets of dialogue with his diminutive co-star, Imogene Coca, matching him word for word. At other times, Caesar let loose his gift for dialect double-talk, able to spout spontaneous gibberish that sounded, to those untrained in the languages, exactly like German, French, and Italian.

Caesar was a compulsive worker who had little gift for small talk. Boisterous when in-character, he once admitted that the most difficult part of doing his variety shows was the opening moment, when he had to appear as himself and wish the audience a good evening. Once past that awkwardness, however, Caesar rarely failed to give people a rollicking good time... 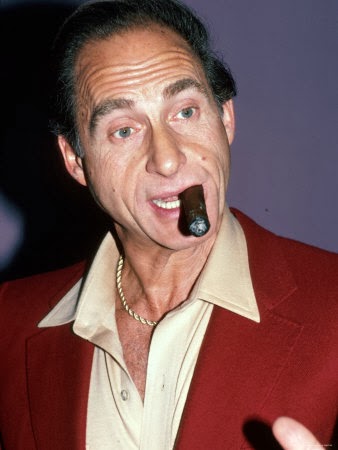 Posted by David Lobosco at 1:09 PM