THE FORGOTTEN DEATH OF TAMARA DRASIN


When air planes crash, it always amazing that one person may survive and then another person near that person might sadly perish. There is really no reasoning, and no matter what your belief system is, our fates is still not up to us. Tamara Drasin, a singer and an actress, is one such person who met her fate because of some bad luck or chance.

Tamara Drasin often credited as simply Tamara, was a singer and actress who introduced the song Smoke Gets in Your Eyes in the 1933 Broadway musical Roberta. She was born in 1905 in the Imperial Russian village of Sorochintsï, in what is modern-day Ukraine.

With her dark, exotic looks and throbbing vocal style, Drasin was ideal casting material for European characters in musicals of the 1930s. In Free For All, she was Marishka Tarasov; in Roberta, she was Princess Stephanie of Russian nobility; and in Right This Way and Leave It to Me!, she portrayed Frenchwomen. In all, Drasin appeared in seven musicals, from 1927 to 1938.

Besides "Smoke Gets in Your Eyes" and another ballad, "The Touch of Your Hand", in Roberta, Drasin introduced three other standards: "I Can Dream, Can't I?" and "I'll Be Seeing You" in Right This Way and "Get Out of Town" in Leave It to Me!.

Ironically, as I'll Be Seeing You was becoming one of the homefront anthems of World War II, Drasin was killed tragically. In December of 1942, a little less than a year after Pearl Harbor, entertainers were recruited to begin going overseas as a morale boost for our troops. Tamara and vocalist Jane Froman were one of the first two entertainers to be approached and agree to go. Word finally came down on February 20,1943, with accompanying orders to depart the next day from New York’s Municipal Field at LaGuardia airport. Passengers boarded a Pan American 314, the legendary Yankee Clipper, in service as part of the fleet since 1939; the 39 people on board included flight crew, military personnel, correspondents and entertainers. The planned route would ultimately take them to London, with a stop at Lisbon Portugal. On the evening of February 22, the ill-fated trip abruptly ended when the plane came to a screaming crash into the murky bacteria laden waters of the Tagus River, near Lisbon.

Her story was partially told in the Jane Froman biopic With a Song in My Heart (1952), as both were in the same plane crash. Froman later said that she had given Drasin her seat, which bothered Froman for the rest of her life. Jane Froman almost lost her leg in the tragic crash and needed surgeries for the rest of her life. Tamara Drasin was believed to have perished on impact. The world lost a real talent as a result of just a switch of airplane seats. Drasin was yet another casuality of World War II and even though Jane Froman is not exactly remembered, Drasin is completely forgotten some seventy years after her death... 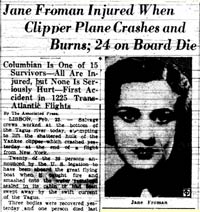