HISTORY OF A SONG: SMILE 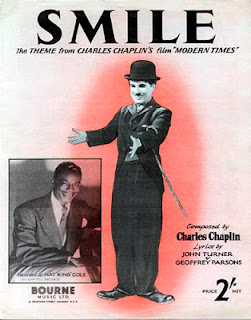 I have a lot of favorite songs, but I think one of the most brilliant songs ever written was a song simply titled "Smile". "Smile" is a song based on an instrumental theme used in the soundtrack for the 1936 Charlie Chaplin movie Modern Times. Chaplin composed the music, while John Turner and Geoffrey Parsons added the lyrics and title in 1954. In the lyrics, the singer is telling the listener to cheer up and that there is always a bright tomorrow, just as long as they smile. "Smile" has become a popular standard since its original use in Chaplin's film.

The song, originally sung by Nat King Cole, charted in 1954. Singer Sunny Gale also covered the song, sharing sales with Cole, as shown in the music trade Cashbox. It was also covered by Cole's daughter, Natalie, on her 1991 album, Unforgettable... with Love. Other great versions of the song include recordings done by Jimmy Durante, Dinah Washington, and Dean Martin.

In Britain, rival versions were released by Lita Roza and Petula Clark in 1954. Clark later re-recorded it for her 1968 album The Other Man's Grass Is Always Greener, by which time she was a personal friend of Charlie Chaplin. Jazz guitarist Royce Campbell recorded it on his album, "Get Happy (2007).

Singer Michael Jackson recorded the song for his 1995 double album HIStory: Past, Present and Future, Book I. It was planned to be released as the eighth and final single from the album in 1998 but was canceled days before its release date. Only a few copies from the Netherlands, Germany and South Africa (where the record distribution was started previous to the withdrawal) were saved as the other copies were withdrawn.

The song was also featured extensively in the 1992 biography film Chaplin which starred Robert Downey Jr. Downey also later recorded an updated version of this great song. The song has always spoken to me because it talks about smiling and keeping a happy front even though you may be torn up inside. It has summed up how I felt a lot of times during my life... 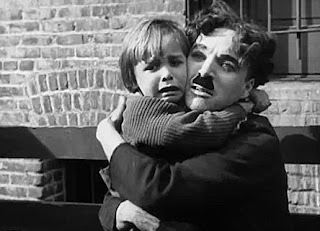