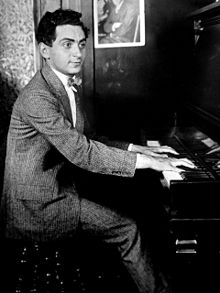 I asked my wife a couple of months ago to name five songs that songrwriting genius Irving Berlin wrote. Sadly, she could only name one song - "God Bless America", and even that impressed me. To anyone born after the assassination of President Kennedy, the name Irving Berlin would unfortunately not mean much, but as a fan of Tin Pan Alley music, Berlin means a lot to me. He was one of the best songwriters America has ever seen. However, even though I pride myself in my knowledge of this great era of music, I admit I did not know much about Irving Berlin's early life. Researching this article got me to learn a lot more about Irving Berlin.

Berlin was born on May 11, 1888, one of eight children of Moses and Lena Lipkin Beilin. There are several possibilities concerning his birth city. It could be Tumen or any one of several villages near the city of Mogilyov, Belarus. His father, a cantor in a synagogue, uprooted the family to America, as did many other Jewish families in the late 19th century. In 1893 they settled in New York City.

They eventually settled on Cherry Street, a "cold-water basement flat with no windows," in the Yiddish Theater District on the Lower East Side, and had a Yiddish-speaking home. His father, unable to find comparable work as a cantor in New York, took a job at a kosher meat market and gave Hebrew lessons on the side, and struggled to support his family. He died a few years later when Irving was thirteen years old. With only a few years of schooling, Irving found it necessary to take to the streets to help support his family He became a newspaper boy, hawking The Evening Journal. On his first day of the job, according to Berlin’s biographer and friend, Alexander Woollcott, the boy “stopped to look at a ship about to put out for China. So entranced was he that he failed to notice a swinging crane, and he was knocked into the river. When he was fished out, after going down for the third time, he was still holding in his clenched fist the five pennies that constituted his first day's receipts, his contribution to the family budget." His mother took jobs as a midwife, and three of his sisters worked wrapping cigars, common for immigrant girls. His older brother worked in a sweatshop assembling shirts.

With few survival skills and little education, he realized that formal employment was out of the question. His only ability was acquired from his father's vocation: singing. He joined with a few other youngsters and went to saloons on the Bowery to sing to customers. These itinerant young singers were common on the Lower East Side. He would sing a few of the popular ballads he heard on the street, hoping that customers would "pitch a few pennies in his direction." As Bergreen notes, "it was in these seamy surroundings that the runaway boy received his real and lasting education." Music became his sole source of income and he emerged culturally from the ghetto lifestyle, learning the "language of the street."

To survive, Berlin began to recognize the kind of songs that appealed to audiences: "well-known tunes expressing simple sentiments were the most reliable." He began plugging songs at Tony Pastor's Music Hall in Union Square and finally, in 1906 when he was 18, working as a singing waiter at the Pelham Cafe in Chinatown.  His first attempt at songwriting was "Marie From Sunny Italy," written in collaboration with the Pelham's resident pianist, Mike Nicholson. The sheet music to this song made history because of a printer's error in the score. The name printed on the cover read: 'I. Berlin.' Interestingly, Berlin never learned to play in more than one key and used a custom-made 1940 Weser Brothers piano with a transposing lever to change keys. 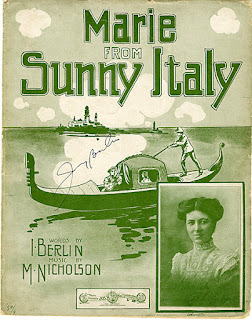 In 1908, at the age of 20, Berlin took a new job at a saloon in the Union Square neighborhood. There, he was able to collaborate with other young songwriters, such as Edgar Leslie, Ted Snyder, Al Piantadosi, and George A. Whiting, and in 1909, the year of the premiere of Israel Zangwill's The Melting Pot, he got his big break as a staff lyricist with the Ted Snyder Company.

From this early position, Hamm writes, his "meteoric rise as a songwriter" in Tin Pan Alley and then on Broadway, began with his first world-famous hit song, "Alexander's Ragtime Band," in 1911. The song was such an astronomical success that Berlin became an overnight songwriting legend. The song was such a success that it was one of the songs played on the ill-fated voyage of the Titanic. For the next almost fifty years Irving wrote the songs that America sang, hummed, and lived their lives through. That is not bad for a poor immigrant who came to America for a better life. Berlin is living proof that the American dream does happen to people...
Posted by David Lobosco at 4:27 AM