The official era of the Big Bands was less than ten years from 1936 to 1945, however the music that era created is remembered to this day. There are many talented musicians and leaders of that era, but I do not think any leader is remembered as much as Glenn Miller. Despite his death in 1944, his music is remembered some 70 years later.

Miller was born on a farm in Clarinda, Iowa on March 1, 1904, to Lewis Elmer Miller and Mattie Lou (née Cavender). He went to grade school in North Platte in western Nebraska. In 1915, Miller's family moved to Grant City, Missouri. Around this time, Miller had finally made enough money from milking cows to buy his first trombone and played in the town orchestra. In 1918, the Miller family moved again, this time to Fort Morgan, Colorado, where Miller went to high school. During his senior year, Miller became very interested in a new style of music called "dance band music." He was so taken with it that he formed his own band with some classmates. By the time Miller graduated from high school in 1921, he had decided he wanted to become a professional musician.

In 1923, Miller entered the University of Colorado at Boulder, where he joined Sigma Nu Fraternity, but spent most of his time away from school, attending auditions and playing any gigs he could get, most notably with Boyd Senter's band in Denver. He dropped out of school after failing three out of five classes one semester, and decided to concentrate on making a career as a professional musician. He later studied the Schillinger technique with Joseph Schillinger, under whose tutelage he composed what became his signature theme, "Moonlight Serenade". In 1926, Miller toured with several groups, eventually landing a good spot in Ben Pollack's group in Los Angeles. During his stint with Pollack, Miller wrote several musical arrangements of his own. He also co-wrote his first song, "Room 1411", written with Benny Goodman and released as a Brunswick 78, 4013, credited to Benny Goodman's Boys. In 1928, when the band arrived in New York City, he sent for and married his college sweetheart, Helen Burger. He was a member of Red Nichols's orchestra in 1930, and because of Nichols, Miller played in the pit bands of two Broadway shows, Strike Up the Band and Girl Crazy (where his bandmates included big band leaders Benny Goodman and Gene Krupa). 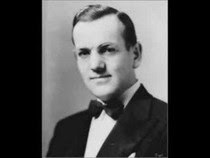 During the late 1920s and early 1930s, Miller managed to earn a living working as a freelance trombonist in several bands. On a March 21, 1928 Victor session Miller played alongside Tommy Dorsey, Benny Goodman, and Joe Venuti in the All-Star Orchestra, directed by Nat Shilkret. On November 14, 1929,an original vocalist named Red McKenzie hired Glenn to play on two records that are now considered to be jazz classics:"Hello, Lola" and "If I Could Be With You One Hour Tonight". Beside Glenn were clarinetist Pee Wee Russell, guitarist Eddie Condon, drummer Gene Krupa and Coleman Hawkins on tenor saxophone.

In the early-to-mid-1930s, Miller also worked as a trombonist and arranger in The Dorsey Brothers, first when they were a Brunswick studio group (under their own name and providing accompaniment for many of The Boswell Sisters sessions), and finally when they formed an ill-fated co-led touring and recording orchestra. Miller composed the song "Annie's Cousin Fanny" and "Dese Dem Dose" for the Dorsey Brothers Band in 1934 and 1935. In 1935, he assembled an American orchestra for British bandleader Ray Noble, developing the arrangement of lead clarinet over four saxophones that eventually became the sonic keynote of his own big band. Members of the Noble band included future bandleaders Claude Thornhill, Bud Freeman and Charlie Spivak. 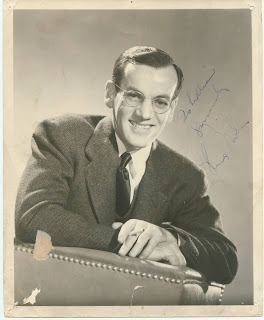 Glenn Miller made his first movie appearance in the 1935 Paramount Pictures release The Big Broadcast of 1936 as a member of the Ray Noble Orchestra performing "Why Stars Come Out at Night". The Big Broadcast of 1936 starred Bing Crosby, George Burns, Gracie Allen, Ethel Merman, Jack Oakie, and Bill "Bojangles" Robinson and also featured other performances by Dorothy Dandridge and the Nicholas Brothers, who would appear with Miller again in two movies for Twentieth Century Fox in 1941 and 1942.

Glenn Miller compiled several musical arrangements and formed his first band in 1937. The band failed to distinguish itself from the many others of the era, and eventually broke up. Benny Goodman said in 1976, "In late 1937, before his band became popular, we were both playing in Dallas. Glenn was pretty dejected and came to see me. He asked, 'What do you do? How do you make it?' I said, 'I don't know, Glenn. You just stay with it." 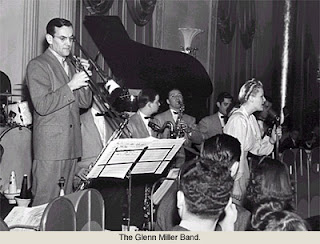 Posted by David Lobosco at 7:57 AM