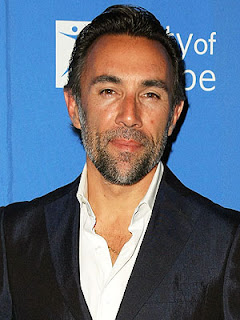 Francesco Quinn, a son of the late screen legend Anthony Quinn, died of an apparent heart attack near his Malibu home on Friday night, reports a local news site and other sources.

Quinn, 48, was reportedly running in the street with his son Max when he collapsed. A neighbor who attempted to revive him told the Malibu Patch: "We were working feverishly at it. But at a certain point it turned, and there was no response."

Paramedics were summoned, and Quinn was reportedly pronounced dead at the hospital.

Born in Rome on March 22, 1963, to Anthony Quinn's second wife Iolanda, Francesco, who bore a strong resemblance to his father (who, in all had 13 children), landed a major screen role in 1986 as the drug dealer Rhah in Oliver Stone's Platoon.

Francesco also appeared on such TV series as The Young and the Restless, NCIS, ER and 24.

Besides his wife Valentina Castellani-Quinn, Quinn is survived by three children. "Francesco was my soulmate and the best father for Sofia, Michela and Max," Valentina told the Malibu Patch. "I will love him forever."