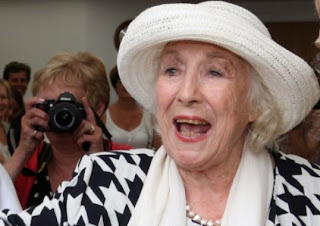 One of the greatest vocalists to ever come out of Great Britain is surprisingly 94 years old. Dame Vera Lynn was the force's sweetheart during World War II. Although she hasn't sung publicly since 1994, her records still sell in the millions. Dame Vera Lynn still makes appearances throughout England for various causes.

Dame Vera Lynn recently visited Princess Marina House in Rustington as a special guest at the home’s Annual Garden Party. On the day Dame Vera met Sir Robert Wright, Controller of the RAF Benevolent Fund, as well as staff and guests of the home. Dame Vera was introduced to several guests including Joan Owen, who served in the RAF during WW2 as a Plotter. She also met the RAF Guinea Pig Mr Jack Perry and his wife Mary, who are frequent visitors to the house.

Joan said: “I am so honoured to have met Dame Vera. She was an inspiration to us all during the war and her example makes one feel proud to be British – especially the way she continues to support the Armed Forces!”

Princess Marina House offers short welfare breaks in a relaxing environment for anyone who has ever served in the RAF, as well as their partners and dependants, with 24 hour care on hand if required.

Dame Vera was also presented with a special cake, made in her honour by special Brighton chocolatiers, and the cake was then shared with residents and sold off to the public for a small donation.

Additionally Lynn has been involved in the efforts to privatize the port of Dover. She called for the port to become a “people’s port” in which local residents could buy shares and have input in its operation. That is a busy schedule for anyone - let alone a 94 year old living legend... 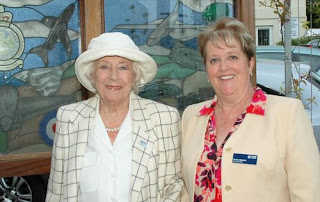 SOURCE
Posted by David Lobosco at 6:08 AM