TCM IN SEPTEMBER: MY TOP PICKS

Here is a new monthly feature where I spotlight what I think are some of the top picks Turner Classic Movies (TCM) is showing in a particular month.

This first edition will include my top ten picks for September 2011:

Two men running a moving company have to get a large piano up a daunting flight of stairs. This is a Laurel and Hardy classic!!! (length:29 min) 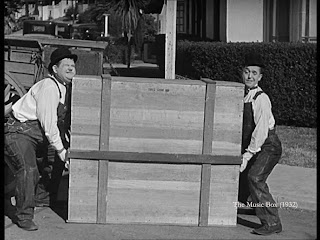 Two sailors on leave romance a dance-hall hostess and her prim sister. I personally think this is one of the best Astaire and Rogers pairings. The stand out number in this movie is "Let's Face The Music And Dance". The Irving Berlin musical score is among his best too! (length:110 min)

A cantor's son goes against family tradition to become a popular singer. This is the first remake of the Jolson classic. The movie is so-so, but it is hardly seen so it is worth the viewing. Danny Thomas and Peggy Lee make a enjoyable onscreen pair. (length:107 min)

A G.I. en route to Europe falls in love during a whirlwind two-day leave in New York City. This is an unusual and underrated role for Judy Garland. Robert Walker and character actor round out this charming love story. (length:90 min)

An Eddie Cantor look-alike organizes an all-star show to help the war effort. Eddie Cantor and almost everyone at Warner Brothers participates in this great war-time musical. The best number is Bette Davis singing and dancing to "They're Either Too Young Or Too Old". (length:127 min)

In this silent film, a city of the future is threatened with destruction when a wealthy corporate leader enlists a mad scientist to put down labor reformers. (length:149 min)

A government agent infiltrates a gang run by a mother-fixated psychotic. This is not really a rare movie, but it is one of my third favorite movie of all time. There was no better gangster than Jimmy Cagney! (length:114 min) 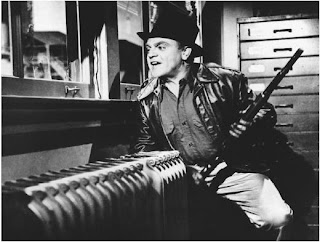 Charles Lindbergh risks his life to complete his historic flight from New York to Paris. I saw this movie when I was a young kid, and I have not had the opportunity to see it since. James Stewart as Lindbergh was perfect casting, and I always forget Billy Wilder directed this bio. (length:135 min)

In this silent film, the Little Tramp joins a circus to hide from the police. I am a huge fan of Charlie Chaplin but I have never seen this movie all the way through. I am excited for this one! (length:72 mins)

An insurance investigator uncovers a string of crimes when he tries to find a murdered boxer's beneficiary. I believe this movie to be one of the classic film noir movies, and it defined the genre. Burt Lancaster and Ava Gardner made the movie what it was! (length:102 min) 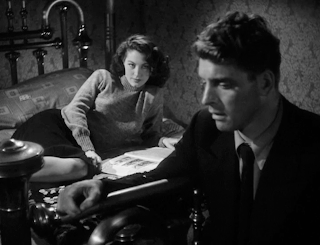 There are a lot of other great movies and festivals going on in September on TCM, but those were my ten picks of the month...

SOURCE
Posted by David Lobosco at 5:31 AM