MOVIE SHOWCASE: THE LIFE OF BRIAN

During the Easter season, there are many movies one may watch as a tradition. Movies like THE TEN COMMANDMENTS and THE PASSION OF THE CHRSIT may come to mind. We have a tradition in our family of watching a very unlikely Easter movie - THE LIFE OF BRIAN. Monty Python's LIFE OF BRIAN, also known as THE LIFE OF BRIAN, is a 1979 British comedy film written, directed and largely performed by the Monty Python comedy team. It tells the story of Brian Cohen (played by Graham Chapman), a young Jewish man who is born on the same day as, and next door to, Jesus Christ, and is subsequently mistaken for the Messiah.

The film contains themes of religious satire which were controversial at the time of its release, drawing accusations of blasphemy and protests from some religious groups. Thirty-nine local authorities in the UK either imposed an outright ban, or imposed an X (18 years) certificate (effectively preventing the film from being shown, as the distributors said the film could not be shown unless it was unedited and carried the original AA (14) certificate). Certain countries banned its showing, with a few of these bans lasting decades. The film makers used such notoriety to benefit their marketing campaign, with posters stating "So funny it was banned in Norway!". By today's standards though the humor is considered fairly tame.

The film was a box-office success, grossing fourth-highest of any film in the UK in 1979 and highest of any British film in the United States that year. It has remained popular since then, receiving positive reviews and being named 'Greatest comedy film of all time' by several magazines and television networks.

Brian Cohen is born in a stable a few doors from the one in which Jesus is born, which initially confuses the three wise men who come to praise the future King of the Jews. Brian grows up an idealistic young man who resents the continuing Roman occupation of Judea. While attending Jesus' Sermon on the Mount, Brian becomes infatuated with an attractive young rebel, Judith. His desire for her and hatred for the Romans lead him to join the Peoples' Front of Judea (PFJ), one of many fractious and bickering separatist movements, who spend more time fighting each other rather than the Romans.

After several misadventures (including a brief trip to outer space in an alien spaceship), and escaping from Pontius Pilate, the fugitive winds up in a lineup of wannabe mystics and prophets who harangue the passing crowd in a plaza. Forced to come up with something plausible in order to blend in and keep the guards off his back, Brian babbles pseudo-religious truisms, and quickly attracts a small but intrigued audience. Once the guards have left, Brian tries to put the episode behind him, but he has unintentionally inspired a movement. He grows frantic when he finds that some people have started to follow him around, with even the slightest unusual occurrence being hailed as a "miracle". After slipping away from the mob, Brian runs into Judith, and they spend the night together. In the morning, Brian opens the curtains to discover an enormous mass of people outside his mother's house, all proclaiming him the Messiah. Appalled, Brian is helpless to change their minds, for his every word and action are immediately seized as points of doctrine. 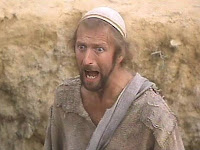 Neither can the hapless Brian find solace back at the PFJ's headquarters, where people fling their afflicted bodies at him demanding miracle cures. After sneaking out the back, Brian finally is captured and scheduled to be crucified. Meanwhile, a huge crowd of natives has assembled outside the palace. Pilate (together with the visiting Biggus Dickus) tries to quell the feeling of revolution by granting them the decision of who should be pardoned. The crowd, however, simply shouts out names containing the letter "R", in order to mock Pilate's mispronunciation. Eventually, Judith appears in the crowd and calls for the release of Brian, which the crowd echoes, since the name contains the letter "R". Pilate then agrees to "welease Bwian".

The order from Pilate is eventually relayed to the guards, but in a moment parodying the climax of the film Spartacus, various crucified people all claim to be "Brian of Nazareth" and the wrong man is released. Various other opportunities for a reprieve for Brian are denied as, one by one, his "allies" (including Judith and his mother) step forward to explain why they are leaving the "noble freedom fighter" hanging in the hot sun. Condemned to a long and painful death, Brian finds his spirits lifted by his fellow sufferers, who break into song with "Always Look on the Bright Side of Life"...

Posted by David Lobosco at 3:06 AM