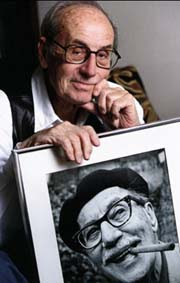 Arthur Marx, who wrote screenplays for film and television and a best-selling book about his father, “Life With Groucho,” died on Thursday at his home in Los Angeles. He was 89.

As a child Mr. Marx spent several years on the road with Groucho Marx and the rest of the Marx Brothers’ vaudeville act — Chico, Harpo, Gummo and later Zeppo — before enjoying a celebrity-filled youth in Los Angeles as the brothers rose to stardom.

His own show-business career was varied and long, writing Hollywood screenplays and scripts for some of television’s most popular sitcoms.

But his father’s life and career provided Mr. Marx with perhaps his richest source of material. “Life With Groucho,” published in 1954, captivated readers with its sharp but affectionate portrait of Groucho — who peppered the narrative with kibitzing footnotes — and its shrewd account of the show-business milieu in which he thrived. A sequel, “Son of Groucho,” was published in 1972.

Mr. Marx and Robert Fisher, a former writer for Groucho, also wrote the book for a 1970 Broadway musical about the Marx Brothers, “Minnie’s Boys,” with Shelley Winters in the lead role of Minnie Marx, and “Groucho: A Life in Revue,” which was produced Off Broadway in 1986.

Taken together, Arthur Marx’s two books about his father offered a bittersweet picture of life in the Marx home. He described himself as desperate both to escape from his father’s shadow and to please him, an impossible task. The comic genius who kept millions in stitches was, in his private life, miserly and emotionally distant.

“No matter how much he loves you, he’ll rarely stick up for you,” Mr. Marx wrote in “Son of Groucho.” “He’ll make some sort of wisecrack instead to keep from getting involved. It’s a form of cowardice that can be more frustrating than his monetary habits.”

When “Life With Groucho,” which was much sunnier than the sequel, was being serialized in The Saturday Evening Post, Groucho denounced it as “scurrilous” and threatened legal action unless substantial changes were made.

Arthur sent him a phony set of galley proofs with the requested changes but had the book published as written. Groucho never brought the matter up again.

In 1974, Arthur Marx became embroiled in a legal battle to block the appointment of his father’s longtime companion, Erin Fleming, as the conservator of his estate. Lurid court testimony depicted Ms. Fleming as a controlling, abusive caretaker, and a superior court judge eventually appointed Andy Marx, Arthur’s son, to replace her. Groucho died a little more than a month after that, on Aug. 19, 1977.

Arthur Julius Marx was born in Manhattan on July 21, 1921. After his family moved to Los Angeles in the 1930s he gained renown as a tennis player, achieving national ranking while still in high school and playing on the junior Davis Cup team in 1939 with the future stars Jack Kramer, Ted Schroeder and Budge Patty. As a student at the University of Southern California, he competed in national tournaments.

After serving with the Coast Guard in the Philippines during World War II, he returned to Los Angeles and found work as a reader at MGM. He soon turned his hand to screenwriting. He wrote scripts for the 1947 Blondie film “Blondie in the Dough” and several popular short films narrated by Pete Smith.

He later teamed up with Mr. Fisher to write the screenplays for the Bob Hope films “Eight on the Lam,” “A Global Affair,” “I’ll Take Sweden” and “Cancel My Reservation.”

The two went on to write for television sitcoms, including “McHale’s Navy,” “Petticoat Junction, “My Three Sons,” “All in the Family,” “The Jeffersons” and “Maude.” They wrote 41 episodes of the sitcom “Alice” from 1977 to 1981.

Mr. Marx used his tennis experiences as background for a novel, “The Ordeal of Willie Brown” (1951), about an unsavory tennis bum, and his lighthearted magazine articles about his young family were gathered into a comic memoir, “Not as a Crocodile” (1958). At the time, he was married to Irene Kahn, the daughter of the songwriters Gus and Grace Kahn. (Mr. Marx and Ms. Kahn later divorced.)

In addition to his family memoirs, Mr. Marx wrote several show-business biographies, including “Goldwyn: A Biography of the Man Behind the Myth,” “Red Skelton,” “The Nine Lives of Mickey Rooney” and “The Secret Life of Bob Hope.” His joint biography of Dean Martin and Jerry Lewis, “Everybody Loves Somebody Sometime (Especially Himself),” published in 1974, was made into a television movie, “Martin and Lewis,” in 2002.

With Mr. Fisher, he also wrote the comedy “The Impossible Years,” which opened on Broadway in 1965 with Alan King in the starring role of a harried psychiatrist with two teenage daughters. It ran for 670 performances.

In addition to his sons Steve, of Seattle, and Andy, of Los Angeles, he is survived by his wife, Lois; a stepdaughter, Linda Donovan of Pleasant Hill, Calif.; two sisters, Miriam Allen of San Clemente, Calif., and Melinda Berti of Mendocino, Calif.; four grandchildren; and two step-grandchildren. 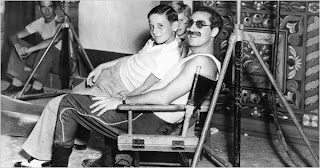 Posted by David Lobosco at 8:17 PM