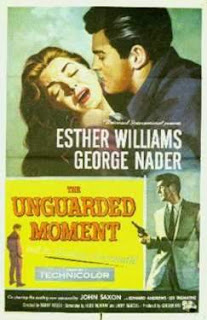 I remember seeing the movie THE UNGUARDED MOMENT during my early days of collecting movies when the VCR was just hitting the height of its popularity, so unfortunately I do not have a copy of the film. There has never been a commercial relase of this movie on VHS or DVD for that matter. It is surprising because it marks a very different role for Esther Williams. She actually stayed dry in the movie, and the plot which actually was pretty dark and realistic for 1956 audiences.

Lois Conway (played by swimmer Esther Williams) is an attractive high school music teacher who has a 1950s bullet bra figure that attracts the attention of lustful sexual psycho student, Leonard Bennett (John Saxon). At home Leonard's father (Edward Andrews) is a creepy repressive misogynistic who lectures his son about the dangers of all women, like his dirty, dead mother.

Lois begins to receive secret notes slipped into her purse and school papers. Quickly the notes become more obscene, and after receiving one asking her to meet at night in the locker room, she goes, hoping to discourage her admirer. Bad move! In the darkness a flashlight glares in her face and she is sexually molested by her unidentified predator. With the help of police lieutenant Harry Graham (George Nader), Lois does her best to fend off future attacks, while trying to keep from suffering a nervous breakdown herself! 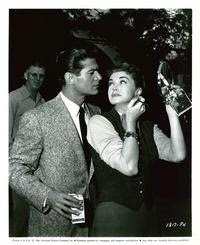 Esther Williams gets her first post MGM starring role and gets off to a good start. This film is a well acted entertaining suspense with a mature theme that would be repeated a million times more in the future - innocent girl stalked creepy woman hater. Esther looks great and if she wanted to, probably could have gone on to do more and better films but according to her autobiography,pretty much gave up working for marriage. Either way she is so likable and engaging that its fun to see her in a totally different role outside of the 'swimming musical'.

Universal was fabulous for making films with former MGM stars after that studio began dropping its biggest names as it began to slide down hill. Stars like Lana Turner, June Allyson and others got to make quality first rate films at Universal that MGM would not allow them to make. I wish Esther had made more but since she didnt, it makes this one all the more special. The movie really changed my opinion of the acting ability of Esther Williams.If you get the rare chance to see THE UNGUARDED MOMENT, I recommend it... 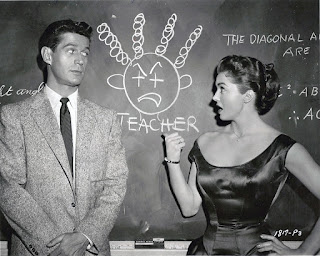